GRANBURY, TX – History runs deep throughout the Lone Star State. Perhaps nowhere in Texas is this more evident than in the little town of Granbury.  A look at the well preserved 19th century homes and original frontier storefronts that line the downtown district make it easy to see why Granbury bills itself as “The Place Where Texas History Lives.”

Although the people of Granbury celebrate their rich history, they also have their eyes firmly fixed on the future. This balance between the time-honored and contemporary was evident recently when the local Acton United Methodist Church installed a massive new LED video wall in its traditional sanctuary. Made with CHAUVET Professional C6 Panels, the 26’ wide by 10’ high wall engages worshippers with crisp and colorful contemporary images, as well as text and IMAG video. Yet, when it’s not in use, this high tech wall “virtually” disappears, leaving the original architectural lines of the sanctuary undisturbed. 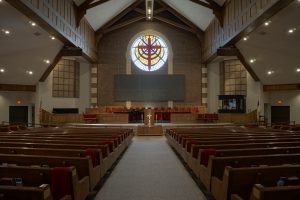 Technical Director Heath Ramsey used the technology built into the C6 panels, (which were supplied by Sound Productions of Dallas) to make it appear that the church’s video wall disappears when not in use.

“The panels are attached to the wall behind our stage using Superstrut channel,” he said. “However, before we installed them we took an image of the existing wall. Then we cropped the image to match the part of the wall that the C6 panels cover.  When we aren’t using video, we simply display that image of our normal brick wall on the panels and have them ‘disappear’ by blending with the building.”

With 12,800 tri-color SMD 3528 LEDs, a 6.25 mm pixel pitch, and a 140° viewing angle, the C6 video panels are able to display realistic images of the church wall from the photograph taken by the Acton United Methodist tech team. “The clarity of the C6’s images allows us to do this plan,” said Ramsey. “Because of it, we’re able to preserve the look of our building, while still enjoying the benefits of having a video wall.”

Among the benefits of having the video wall is the ability to display a wide range of images for different age groups during different services and events, such as contemporary for young people and softer images for children. Drawing on the wall’s ability to display video images, the church now uses them to have movie nights. The wall also serves as a scenic element during concerts, as well as at Christmas and Easter services. Ambient light from the high-output panels can colorwash the entire sanctuary. At times the video panels will display text over the image of the church’s brick wall, creating the appearance that the text is written on the brick wall itself. 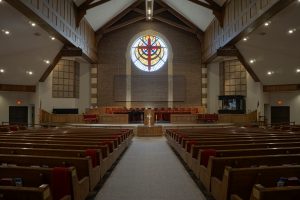 The brightness of the C6 panels played a key role in the decision to install them at Acton United Methodist. Large windows to either side of the stage and an impressive stained glass window over its center allow a large amount of ambient light into the sanctuary. “Projection video would not work well here because of the light,” said Ramsey. “The C6 was designed for daylight use, which was important in my purchase decision.”

Ramsey was also impressed with the flicker-free operation and high refresh rate of the C6. “We record our services and other events on video, so we wanted a wall that would look good on camera,” he said.

Of course, “looking good” is something that the C6 wall has done very well at this church, whether it’s  displaying images and text, or doing its best imitation of the brick wall around it. 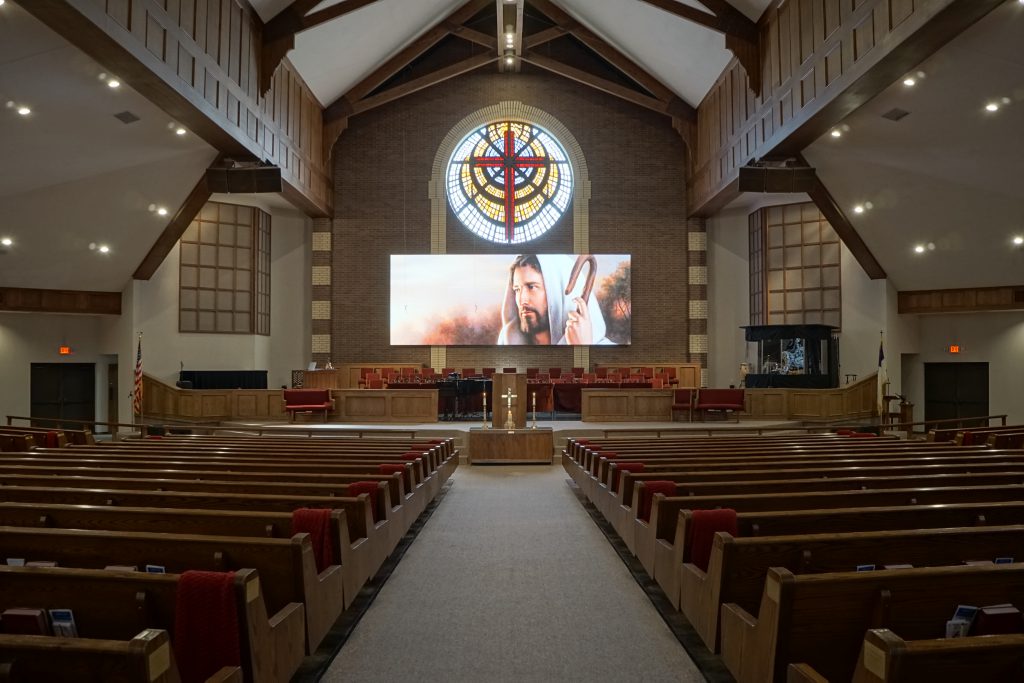