LONDON – A large pyramid shaped scenic element defined the stage in the British Theatre Academy’s recent production of Joseph and the Amazing Technicolor Dreamcoat. Its classic, unmistakable outline symbolized ancient Egypt in this time-honored musical, the first written by Sir Andrew Lloyd Weber, that recounts the story of Joseph from The Book of Genesis.

The pyramid certainly succeeded in conveying a sense of time and place, but thanks to a collaboration between the BTA’s Artistic Director Dean Johnson and lighting designer Andrew Exeter, it also did much more.

Constructed with six CHAUVET Professional COLORdash Batten-Quad-12 fixtures, supplied by T&B Events, the distinctive triangular structure was used to create a flowing wave of color changes that accentuated the powerful current of emotions running through this story of hope, betrayal, courage, and redemption. 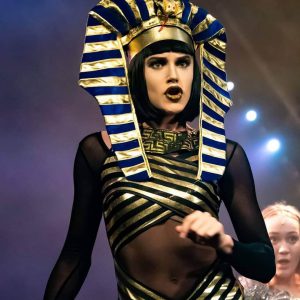 “Dean and I have worked together on many projects,” said Exeter, “His concept for the set in this production called for having this giant pyramid act as a symbol of Egypt, then using it with color to reflect the moods and character development of the protagonist, as well as the flavor of the different locations in the play. Based on experience, we knew that the COLORdash Battens could help us achieve this vision, so we hired them out from T&B Events.”

Using pixels and offsetting color, Exeter focused different architectural looks on the COLORdash Batten-Quad 12 fixture to underscore different moods. “The color of the pyramids’ battens mirrored the changes that took place in the play,” he said. “For example, we included blue by gold pixels for Joseph’s progression to ‘Pharaoh’s number two’ man. We also had a great many missing pixels in the battens for Joseph’s evil brother when he returned to Canaan and sang: ‘Canaan Days.’ Given the name of this show, color was obviously going to be of paramount importance, so we used it as a tool to turn the pyramid into a powerful emotional force.”

Although the pyramid occupied a prominent place on the stage, the transformative power of color in Exeter’s design extended beyond this single scenic piece. He also relied on colored backlighting from the battens as well as two Rogue R3 Wash fixtures, positioned stage left and stage right, to add impact to key moments in the play.

“I think this was the first show where we managed to use almost every color in one song,” he said. “Joseph’s coat itself was an interesting number to light. We continuously relied on subtle color changes to set the tone. Taking Potifar’s wife for example, we decided to play with the hue of the red and white coloring of this scene to make it more of a ruby and white. This kept the scene within the same world, but shifted to a slightly different location.” 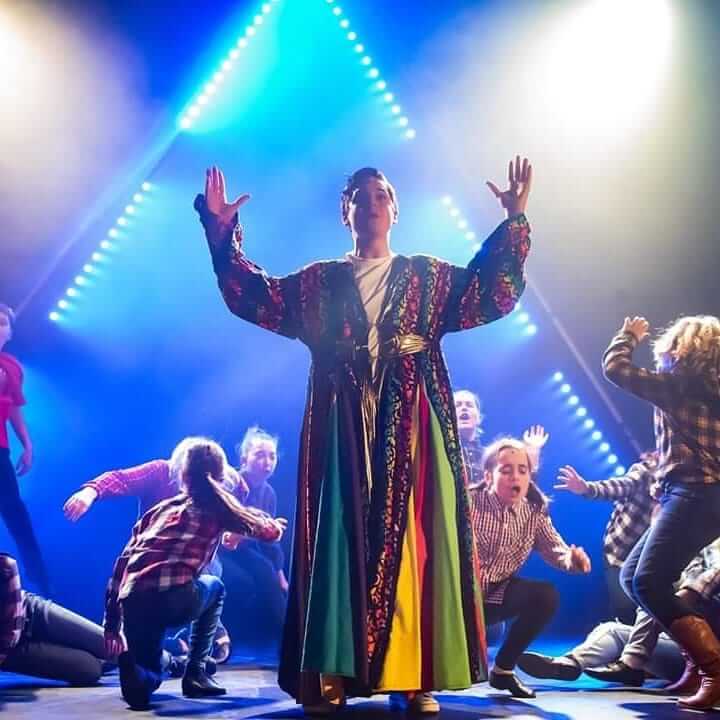 The relatively low ceiling of the Compass Theatre, where the show took place, made it more challenging to cover the stage in evocative colors. “This is a wonderful theatre, but the stage height is quite low, which made it critically important to have a fixture with a wide zoom,” said Exeter. “Although I had used the COLORdash fixtures quite often, I was not familiar with the Rogue R3 Wash, but tried it on the recommendation of T&B.”

“I was very impressed with its colors and its in built color correction for different kelvin levels,” continue Exeter. “This made the fixture incredibly useful and sped up my programming time immensely. As the Rogues are also such an attractive visual head, we sat them just below the rig, which allowed a little more pixel design to be shown to the audience.”

In addition to using color to suggest different moods, Exeter relied on shadows and dark spaces during some of the play’s more tense scenes. Such a moment occurred when Joseph was jailed and sang the plaintive “Close Every Door.” Exeter lit this scene with just a single fixture.

“Joseph is absolutely non-stop. Its pace is apparent as soon as the show begins,” said Exeter, who describes lighting this production as a “balancing act” that required knowing when to increase movement and color, when to reveal the pyramid, and when to use shadows.

Achieving this balance was, a “rewarding challenge,” he recalls – a challenge he met in flying colors, even when relying on dark spaces.