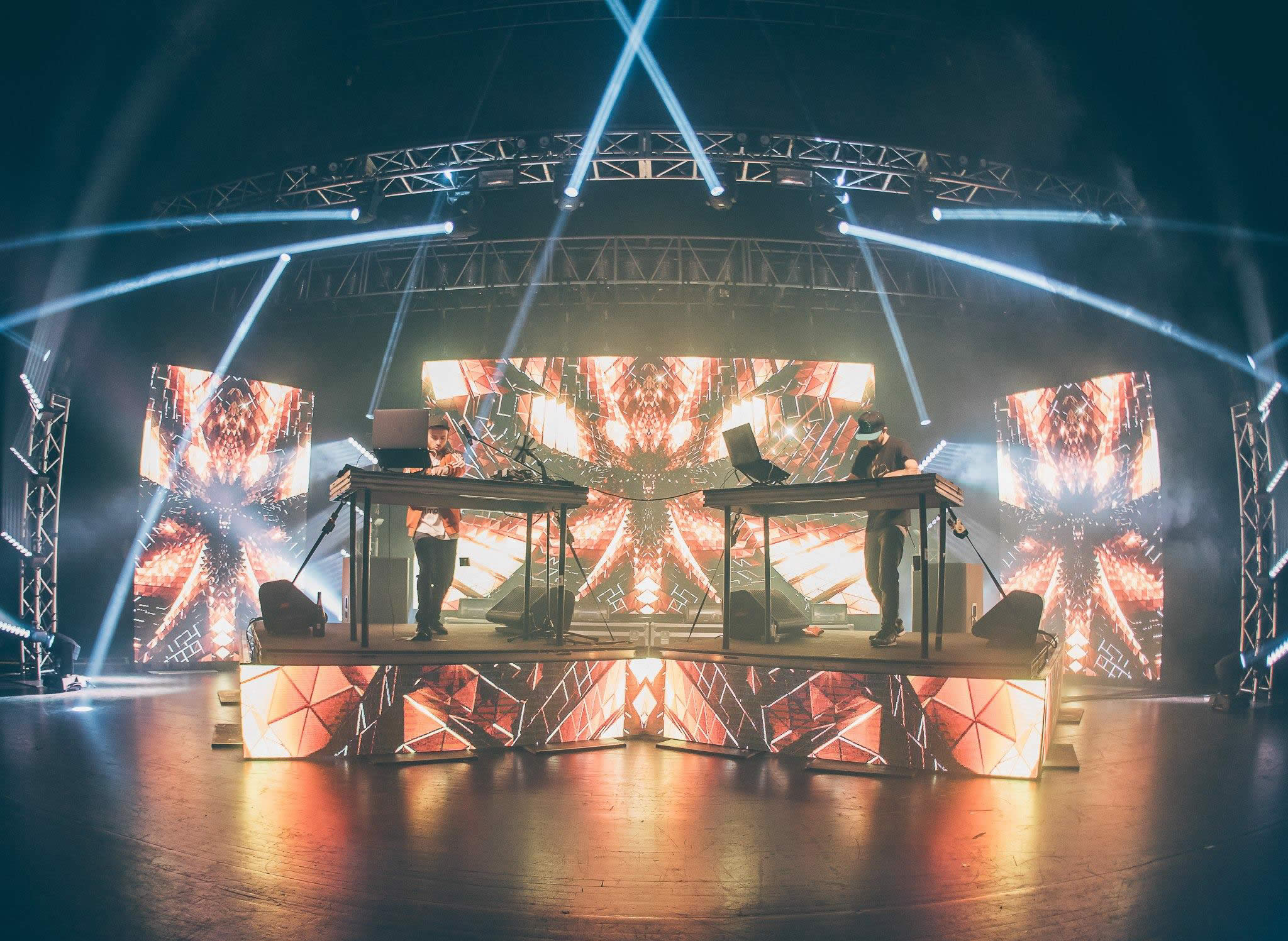 Where does the light show end, and the video show begin? Pose this question to Max Koehler and Ryan Warffuel of Antic Studios, and you’re likely to get a polite, but quizzical look. In their collaborative designs, light and video flow as naturally into one another as two streams of water joining to form a larger river. And what a fantastical course that river follows too… transforming the stage, not just through its vivid images and brilliant colors, but also with unifying geometric patterns that create an all-encompassing setting in which both lighting and video are balanced in celestial-like harmony.

The two friends began their collaboration with Koehler handling video and Warffuel lighting six years ago, Their first project was at The House of Rock in their hometown of Eau Claire, WI on September 21, 2012. Their skyrocketing career has since taken them to major festivals and concert venues working for the likes of Ganja White Night, Adventure Club, Bassnectar and other stars.

Recently, they talked to us about the fusion of video and light. Given the tight nature of their friendship and collaborative relationship, we have presented their joint answers as one.

When you begin a project do you always start with one thing (lighting or video) first, or does it vary so sometimes you’ll start with lighting and other times with video?
“Generally, we tackle the video portion of a project first.”

Why do you work your designs that way?
“Starting projects with a video design gives us a good idea of what the rigging will be like, along with negative spaces that need to be filled with lighting fixtures and special effects.”

Some older designers say that when the video wall is on, the lights go down and when the lights are going crazy, the screen goes off. But you aren’t afraid to mix lighting and video together. What’s your thinking there?
“There are definitely key moments in a given performance where it’s crucial to focus solely on either video or lights. Synchronized lyric videos would be a good example of when we keep lighting elements to a minimum, and on the other end of the spectrum, the beginning of a breakdown, after an intense moment, is when we like to kill video and cue blinders or other fixtures to highlight the end of a song and the beginning of a new one.”

How do you keep lighting and video from drowning out each other?
“We learned early on that bringing down the LED brightness is a common solution to balancing light across the stage. My favorite trick is to set up a camera and tripod, expose my camera to the lighting fixtures, and then dial back the LEDs until they match the exposure without blowing out the image.”

What is the key to balancing video and light in a design?
“We don’t follow any set rules as far as balancing the amount of video tiles used in a design versus lighting fixtures. 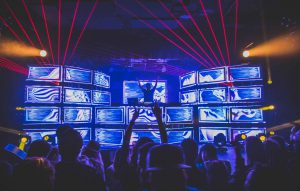 However, there are instances where clients request a large LED wall and leave little room in the budget to properly fill in space with lighting fixtures. In these cases, we generally spread out the positions of the lights by placing half of them up high above the LED wall, and use the other half as a ground package down low.”

Do you look at the lighting design when designing video or vice versa, so they match?
“We’re always bouncing ideas and requests off each other to ensure that video content and light programming stays consistent. But some of our best work stems from seeing a color combination, movement, or chase pattern that one of us made and simply being inspired to create something that complements it and adds more life to it.”

In some of your designs, you use a lot of intense light beams pointing out from the stage in a way that kind of creates a funnel of light leading to the center stage video wall. Do you use light to funnel attention to video?
“The main idea here is to draw the audience’s attention forward towards the center of the stage. Fanning the fixtures outward like this also fills in a great amount of negative space throughout the crowd. We do like to save these big looks for key moments in a set that allows video elements to stand out without competing with lighting fixtures.” 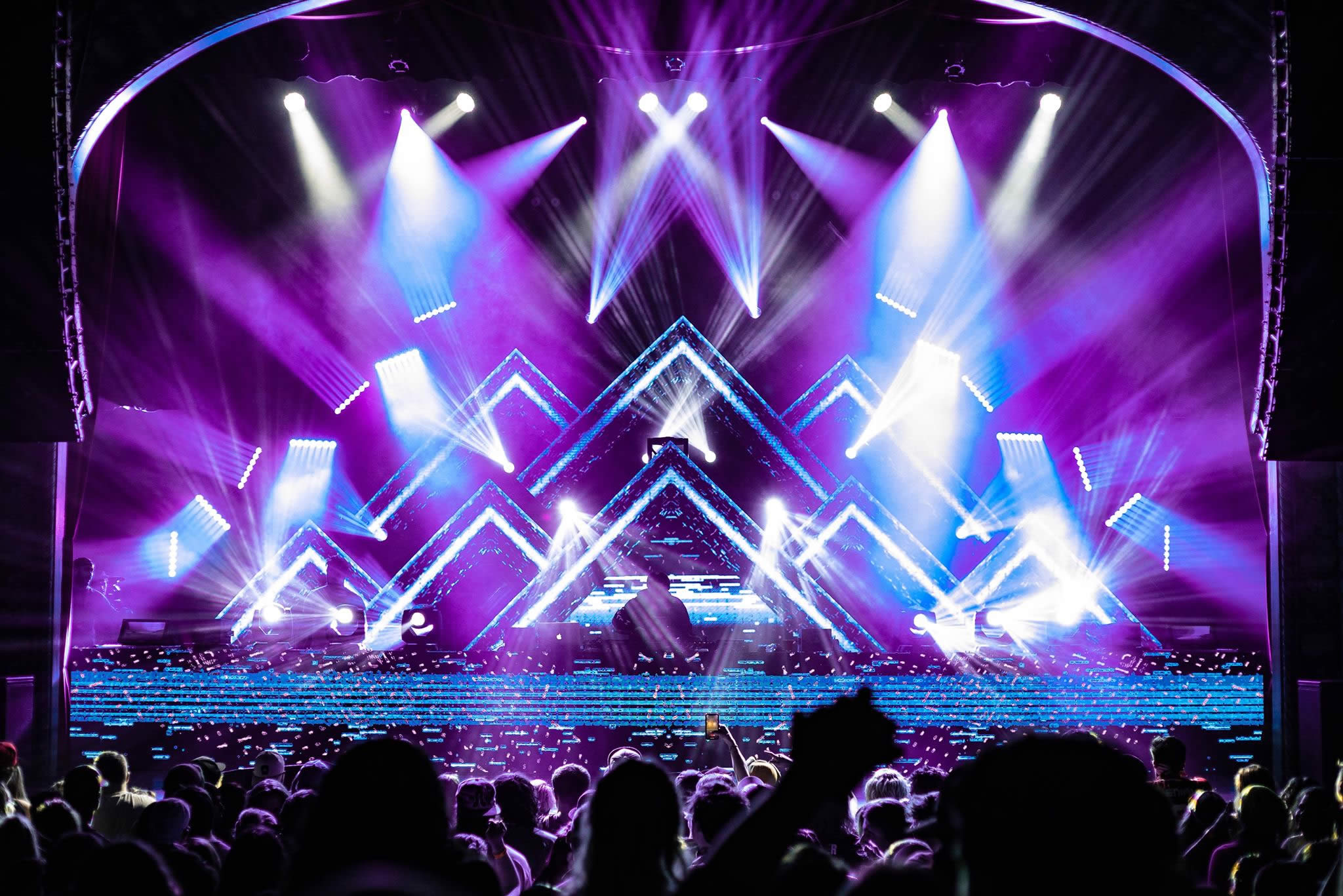 In your design for Adventure Club’s “Death or Glory” tour, you mixed light and video in the same wall, rather than separating them. What is your thinking there?
“Having the panels arranged in a mountain-like structure created a lot of cracks and crevices throughout the design. Right away we saw an opportunity to fill in these holes with addition lighting fixtures using horizontal piping mounted to the vertical trussing. Ryan was able to pull off some really nice looks because of this.”

You use LED panels a lot. Have you ever worked with projection video? What are your thoughts on it?
“Projection mapping is actually what originally captured our interest in stage production. The possibilities on a creative level are limitless. We truly believe that without this experience early on in our careers, our approach from a design perspective would be quite different than it is today.”

You often like to break your video presentation into pieces and configure those pieces in a way that creates a shape like a triangle or diamond. Why do you tend to do this rather than have one giant video wall?
“The short answer to this would be that it’s simply way more fun. You’re able to get better use out of the LED tiles, and use them more like a lighting fixture by adding chase elements and border specific content.”

Does the way you configure a video wall influence the types of images you will display on it?
“The LED configuration plays a large role in determining the style of content we use on a given rig. More boxy/rectangular designs tend to look good with 3D video frames and infinity mirror looks. While sharp triangular designs call for more of a grungy electric look. I would say the most import thing to consider when designing content would be to do your research on the artist your collaborating with to ensure you’re complementing their marketing vision.” 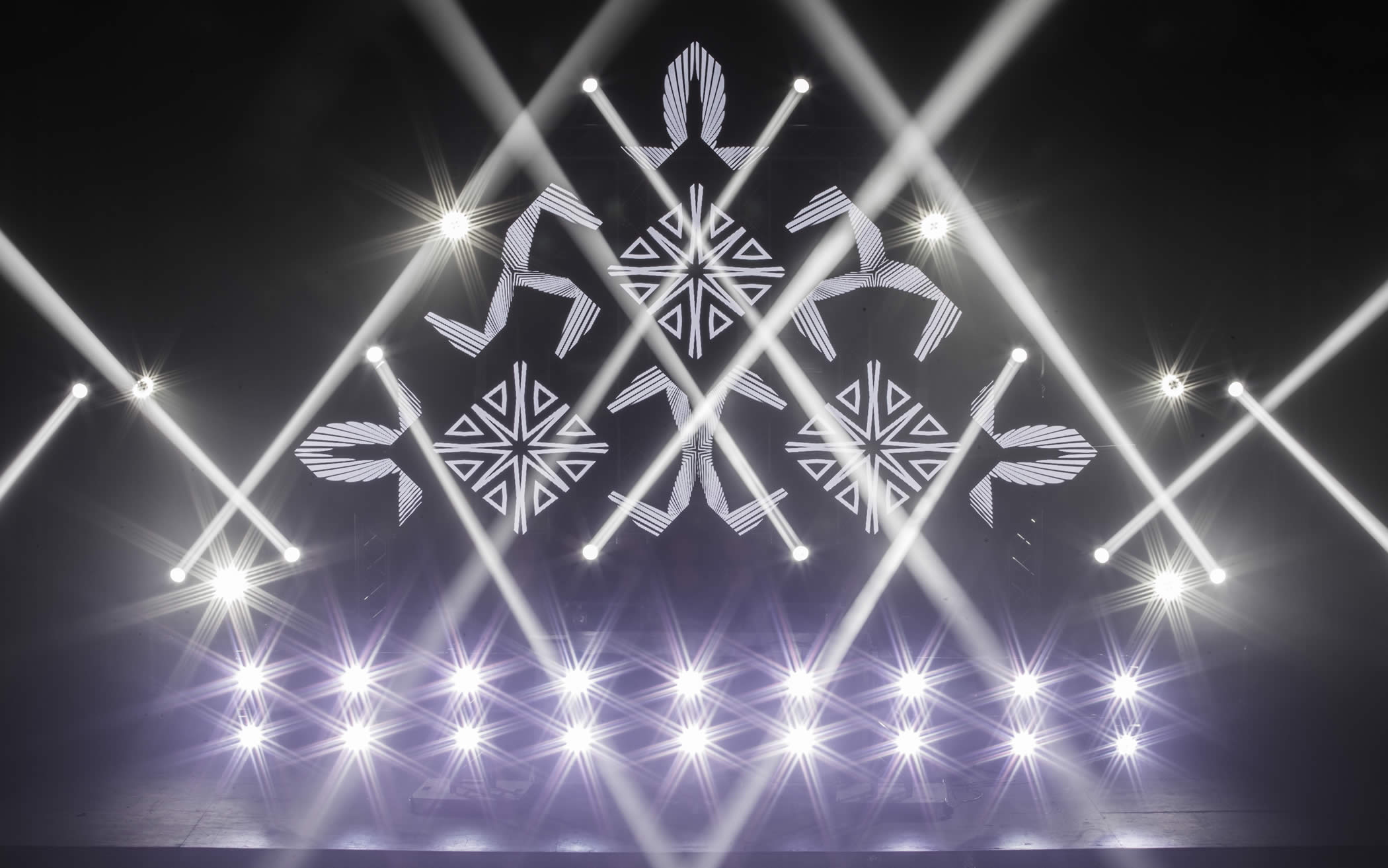 Do you ever accent your walls with LED strip fixtures?
“Yeah, we love to use LED strips to border the overall design, or fill in negative space between video tiles and lighting fixtures. It adds an entirely new element to the rig. The best feature is the ability to run the same content displayed on the video tiles through the LED strips. It keeps your colors in sync but produces a much different look and feel overall.”

You guys have a great working relationship. What’s your secret?
“Our business relationship stems from a friendship. So, we naturally have a lot of things in common. We also each have a good understanding of what the other is capable of, so there’s a lot of pushback when it comes to expectations, which produces better results overall. If we do find ourselves in a disagreement, we work through it until there’s an equal level of compromise and we’re both satisfied with a plan to move forward.”