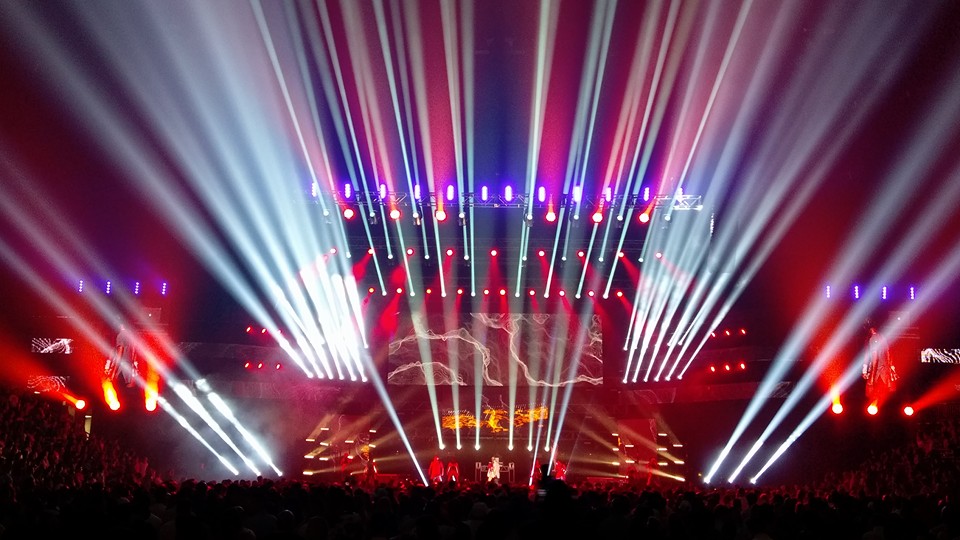 SAN JUAN, PR – Born in New York to Dominican and Puerto Rican parents (his mother is Carmen Santos of  “Las Chicas del Can”) and raised for much of his youth in Puerto Rico, internationally acclaimed singer Arcángel fuses a diverse mix of musical and cultural influences into his unique brand of Reggaetón. His bold blend of rap, hip-hop, electro and Caribbean sounds has ignited the passions of audiences around the world. Such music calls for a fiercely intense lightshow, which is precisely what David Ayala provided for the superstar’s recent “Los Favoritos” concert, using a collection of high-output fixtures from CHAUVET Professional supplied by Musique Xpress. 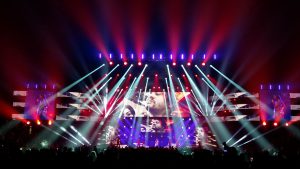 Ayala, who served as the production manager as well as the lighting designer for the “Los Favoritos” concert at the Coliseo de Puerto Rico José M. Agrelot, featured a collection of 24 Rogue RH1 Hybrid moving beam/spots, 20 COLORado 4 IP RGBW linear washes and 18 Next NXT-1 moving RGBW panels in his rig. The intense brightness, rich colors and rapid movements of these fixtures worked in harmony with the video walls, lasers, blinders and foggers in the LD’s rig to create a nonstop cavalcade of richly textured visuals that matched Arcángel’s swaying rhythmic music note for intense note. 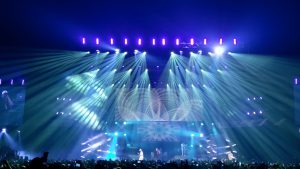 “Raphy Pina (‘Mr. Sold Out’), the promoter of the ‘Los Favoritos’ concert contacted me after seeing our show for The Kingdom Daddy Yankee vs. Don Omar this past December,” said Ayala. “He wanted the same kind of powerful show here to reflect the passion of the music. So, all of the fixtures in the rig had to keep up with this intensity. I like the Chauvet fixtures, since they are powerful, reliable and always keep their colors without losing anything.”

The Rogue RH1 Hybrids were especially important in filling a wide range of roles in Ayala’s multi-faceted design. “I used the Rogue RH1 because the fixtures can look powerful as a beam or spot in the design wings between a lot of the LED screens and other lights,” said the LD. “The output is very great and the colors are bold, so they stand out even when you have a lot of other things happening on stage.” 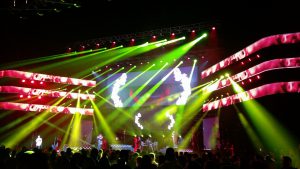 Ayala positioned the Rogue fixtures on downstage deck and on artist risers, in addition to flying them on vertical truss between the video walls.  The fixtures were used to wash the performers and dancers on stage with a rainbow of changing colors to reflect the varying mood of the music. At other points during the concert, the Rogues were used as crossing beam aerial effects and as part of captivating chase sequences.

The Next NXT-1 panels and COLORado 4IP washes also played critical roles in Ayala’s design. Arranged symmetrically on a upstage wall, the NXT-1 units created a vibrant color background that matched the hue of the washes and often moved in sync with the music. 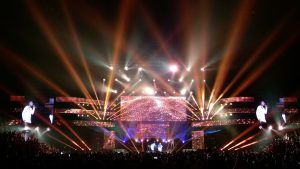 “I used the NXT-1 as my background,” said Ayala. “It was the last layer of my design and provided a good foundation for the show.”

Flown vertically and horizontally from truss, the COLORado 4 IP fixtures provided engaging audience lighting. “I selected the COLORados for my rig because they look nice and powerful with RGBW colors,” said Ayala. “They had the power to cover the audience around the venue. We were happy with the way that these lights brought the audience closer to the performers.” 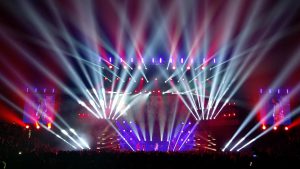 The performance of the COLORado fixtures opened new ideas for Enrique Nuñez, President of Musique Xpress. “I didn’t realize how great the Colorado 4 IP worked as an audience light,” he said, “They pretty much did the job that was meant to be done by other fixtures. The COLORados gave the audience a nice colorful visual effect that was very immersive.”

Creating this immersive lightshow was an especially impressive accomplishment, given the time pressure that Ayala and his team were under. “The biggest challenge of this project was that we had very short time to change over from another production we were working on,” he said. “Richard Vicens and all the Musique Xpress crew ‘La Guerrilla’ deserve thanks for all they did. They worked a lot of hours to do make the show possible – but we had fun and the result was very good.” 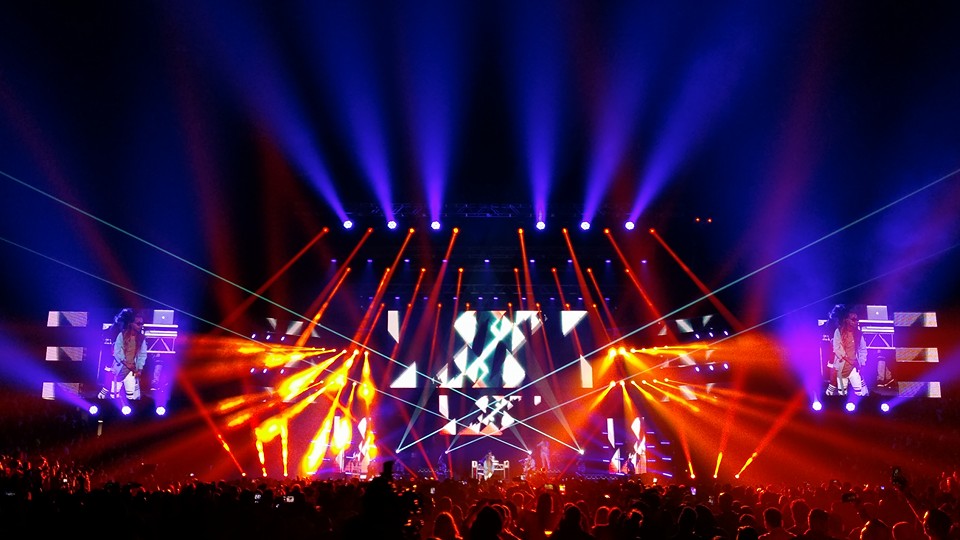