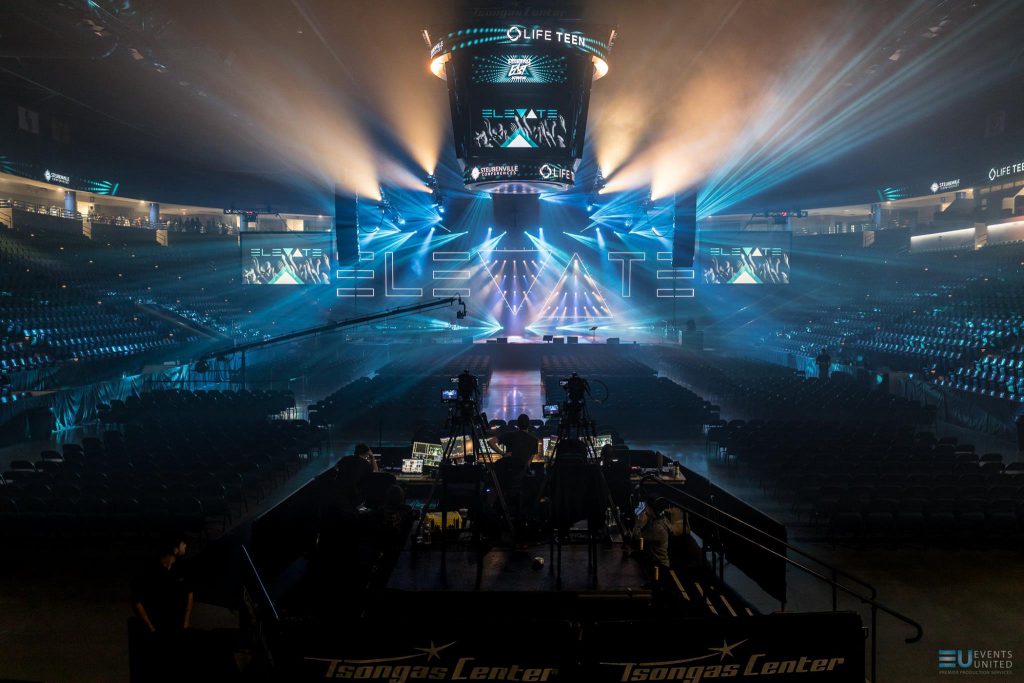 The space separating lighting from video has narrowed at an astonishingly rapid rate. Thanks to technological advances like pixel mapping and high-output LED video panels that easily double as lighting fixtures, what was once a gap just a few years ago has narrowed to an ever-so-small crevice. This convergence has created a wealth of opportunity for designers, making it possible for them to encompass an entire stage with a single immersive panorama of coordinated video and light.

Along with this opportunity though has come the new challenge of balancing these powerful design tools. How do you keep video from overpowering light, or light from washing out video images? When do you display video images on pixel-mapped fixtures and when do you use a video panel as a colorizing light?

Tim Messina of Events United in Londonderry, New Hampshire has been wrestling with questions like these for years – and coming up with some very impressive looking answers. Like many people, we were awed by the 80-foot video wall he created earlier this year for the Steubenville Conference religious rally. Equally impressive was the way he recently blended lighting and video together in a single wall for the Warrior Conference. (Photos of both projects are featured with this article.)

We asked Messina to share some insights with us on the delicate balancing act needed to have lighting and video work in harmony on stage. 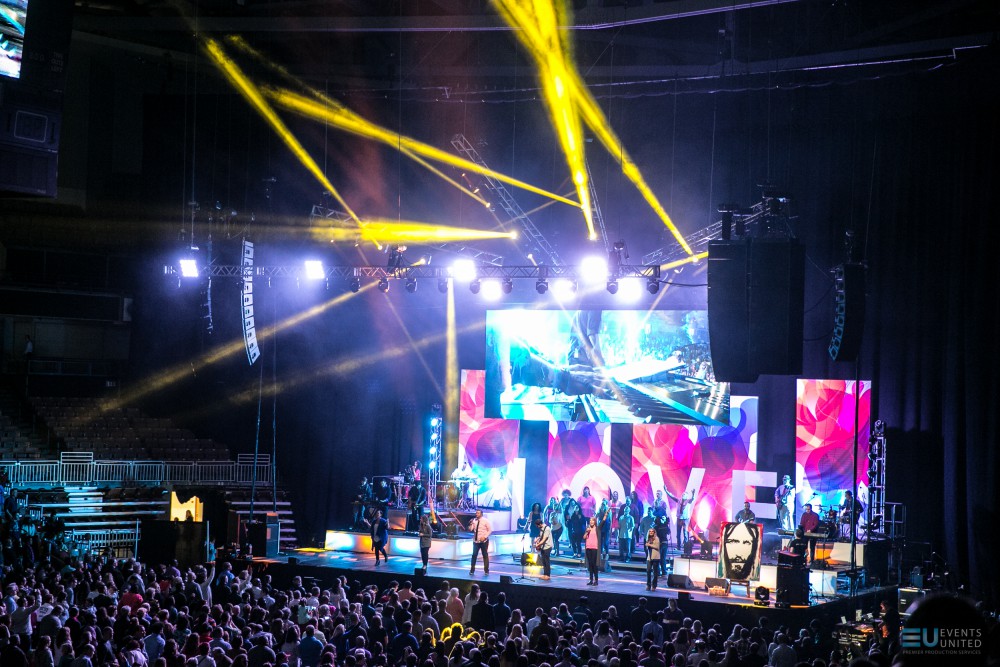 Let’s start out at the most fundamental level. If you had to sum it up in a couple of sentences, what makes a successful balance between lighting and video?
“It starts with clear communication between the production manager and the video and lighting techs. Typically, in our case, the production manager will coordinate with the video and lighting teams to make sure their designs complement each other. This coordination starts at the beginning of our design process and goes all the way through the final rehearsal right before the show.”

Can you talk about projection video vs. LED wall, how is it different balancing light with each of them?
“For projection, the most basic lighting requirement is to make sure we don’t have any lights aiming at or close to the screens. We try to space IMAG projection screens in places that will be the least affected by stage lighting. This is usually in line with our upstage lighting truss and 10-feet or so off the side of the stage. The projection height is determined by the size of the screen and relative distance to the seating or standing areas.

“Using projection for set design can be more difficult. Most set designs that incorporate projection have to be meticulously planned, because it’s very easy to wash out projection from our downstage wash. Even if your designer has the front wash in mind to avoid the projection you have to consider the amount of light bouncing off the stage and hitting the screen- and how that will impact the projection. This is true even with a black stage, since this can also reflect light.”

How about with video walls?
“You don’t need to be concerned about washing out a video wall, since it emits light rather than reflects it. But we are still careful to not hit our video walls with front light, because light makes the edges of the video wall visible to the audience, which takes away from their visual impact. One of the biggest benefits of video walls is they can act as a lighting fixture in that they can be bright like the rest of our lights. We don’t have to be as careful about the rest of our lights being too bright because the LED wall can keep up.” 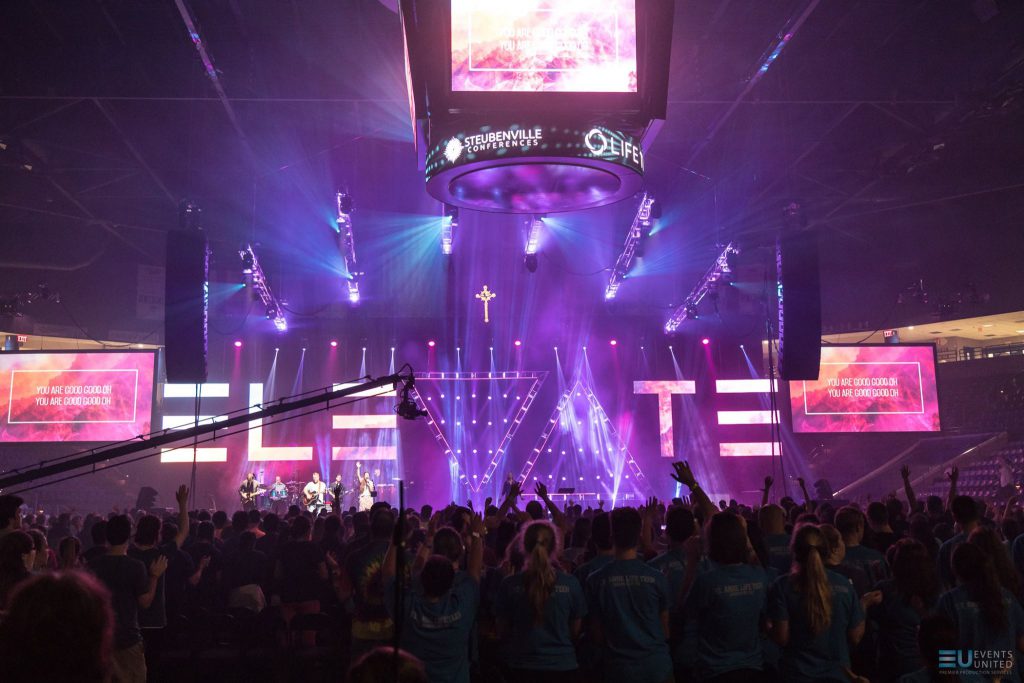 In your work for the Warrior Conference, you mixed light and video together, by having light from your fixtures shine through a word spelled out in video panels. Can you tell us why and how you did that?
“It is really critical that a design has layers and depth, as this makes it more engaging. The Warrior Conference had a few layers to its design, one of which was the video wall itself and another was putting CHAUVET Professional Colorado 2 Solos behind it. This let us shine light through the wall, which made for an awesome industrial effect when there was only text on the wall. We wanted to be able to vary the looks for the conference and we didn’t want the LED wall on all the time. On the other hand, we didn’t want to have this big empty space on the stage when the video was off. Having light shoot through it addressed this issue and it looked awesome.”

So what you’re saying is that when you include a video wall in your design, you have to consider how the wall looks when it’s off and how you can use lighting to dress it up during those times. Based on that is it fair to say that when you have a large video wall on stage, you base your lighting design around it?
“When working on initial concept designs we try to get the big pieces of the puzzle figured out first. We will decide what the overall theme will be and then start the design working with larger elements first and then filling in spots. For instance, this Christmas we are providing production for Manchester Christian Church at the arena here in New Hampshire. The church wants a snowflake themed design to go with the message and their creative arts pastor, Ben Davis, came up with an idea of using a LED wall to make a snowflake. We took the idea and have made a design that started with a 40’ LED wall snowflake and then filled it in section by section. We added pixel mapping CHAUVET Professional Epix Strips to make the snowflake have ‘crystalized’ ends.

“Once we have the basic concept done, we start adding our lights. We know we need the following down light on the band, we know we need hair light on the presenters and singers, we also know we need a down stage wash, and we know we need effect lighting. We select lights that address these needs. Of course, we’ll also work with the church to add some scenic pieces to fill in any last gaps on stage. They will be making 40-60 large snowflakes that we will hang around the arena and light up. We will also have Christmas trees on the stage and possibly flown to fill more space between the snowflake and IMAG screens. So the entire process I described started with the one snowflake idea – all the subsequent decisions were made to make that idea happen.” 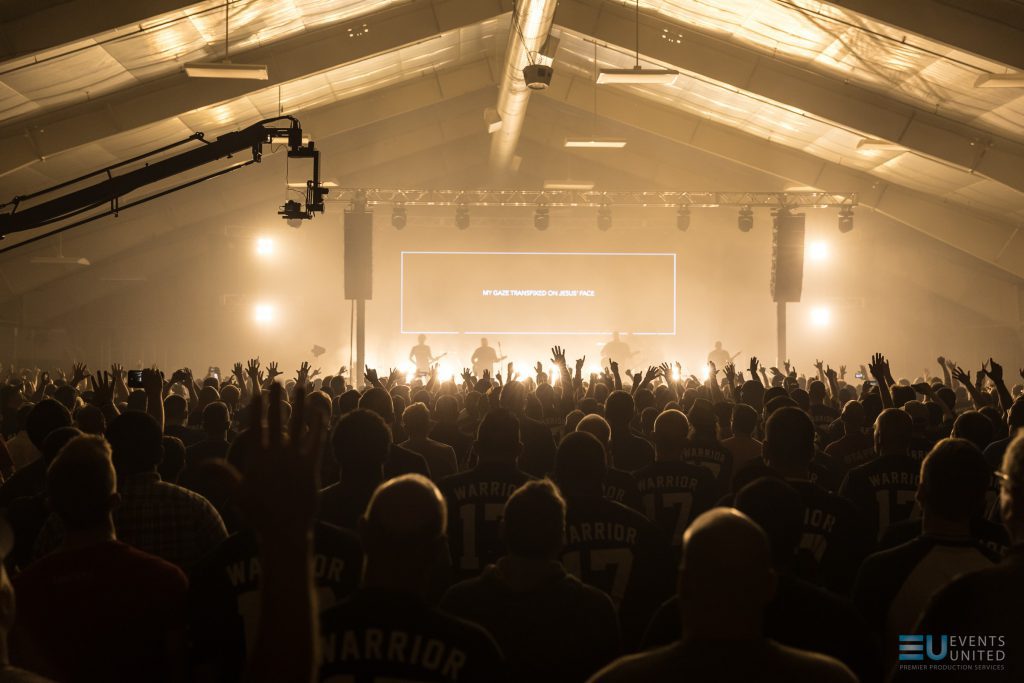 “We have some extremely bright lighting fixtures, but our video wall can be over bearing with brightness. Many of our lighting fixtures have much greater output than a video panel, but the sheer size of video walls and the accumulation of pixels can make them appear to be much brighter. Once we have a set design in place and up and running we will look through a camera to get the levels balanced.”

Why a camera?
“It’s important to use a camera rather than our eye because the dynamic range on a camera is much lower than our eye and we are typically capturing the event with cameras. Even if the event isn’t filmed we still use a camera to balance the levels because it looks better to the eye anyway. Using a light meter in this instance is close to impossible because of the amount of lighting elements.”

Sometimes it seems that lighting and LED video walls are fighting each other on stage in terms of their movement, so both are going crazy with wild movements at the same time. Is it a good idea to balance your design so that when video is at its high point, lighting takes a lower profile and vice versa?
“It really depends on the context. There are times when having video content and lighting going crazy at the same time is the right option. There are times when having video only is the right option and there are times when lighting-only is the best choice. We have to consider the program as a whole and at what point what should be featured. Sometimes lighting is supporting the video content but is not the feature. More often than not video and lighting are working in a similar fashion. If the song calls for high energy, then the video content may be bright and fast moving and lighting may be doing the same thing. If the song is dramatic and powerful, then lighting needs to flow with the music and the video content may be more of a background element. It all depends on the context.” 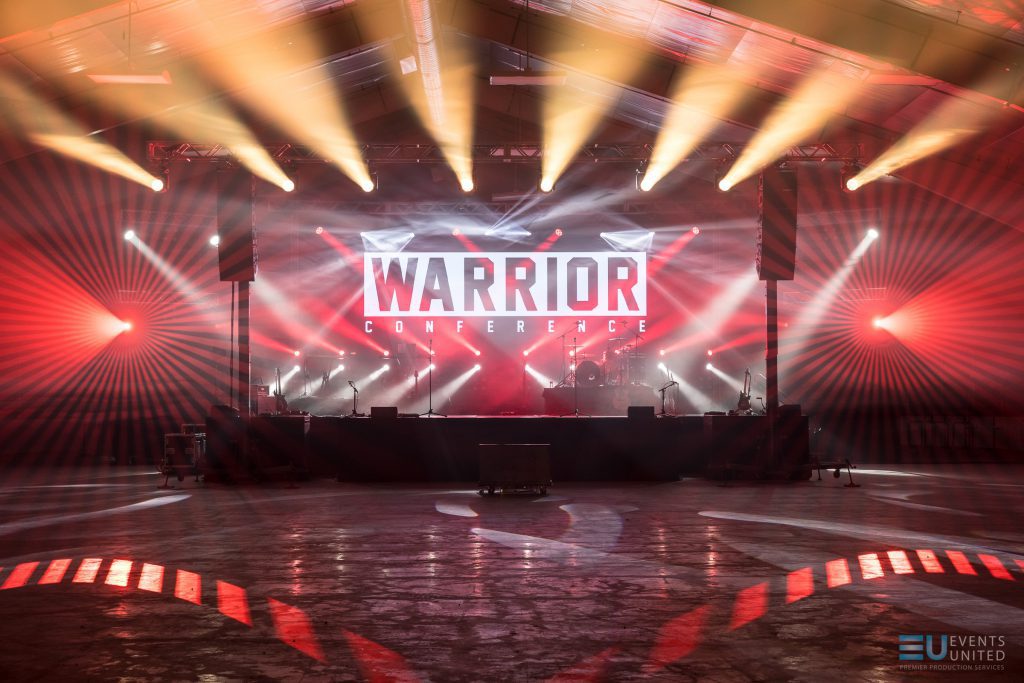 Is there a common mistake that you see people make when they have lighting and video in their design together?
“Oh man, I’ve seen a lot of weird things. I’ve seen disco lighting to a slow love song, I’ve seen front washes so bright and unfocused that you weren’t sure if the stage was in the audience, I’ve seen songs end and the lighting continues for a minute after the song ended, I’ve seen moving beam lights aimed into the audience’s eyes for the duration of an entire show. Honestly, most of the time the main issues for video and lighting is matching exposure across the whole stage, which includes lighting and video. This doesn’t mean you can’t use blinders and other super bright FX, but it means that overall the entire stage works together within a camera’s single exposure.”

What role do you see pixel strips playing in a design that has a video wall? Are they a bridge between video and lighting?
“I think the bridge between lighting and video is the ability to add pixel mapping to lights in general. For instance, if we border an LED wall with moving lights we may send the color info to the moving light and treat it as a pixel or pixels within the video content. We still have control of the light from the lighting desk, but we can also take the video data into the fixture so it blends in with the video content. This is true for LED strips as well. They can be treated as a normal light fixture with video content mapped across them.”

Any predictions on the video-lighting partnership of the future?
“I think in the next three years we will see more bridging between video, lighting, and even audio. To me, one of the more exciting parts to production that we’ve done is having our audio, lighting, and video system working in sync. We’ve taken audio from our console, piped it into our media server, used reactive media that can respond to the audio waveform, then have the media server output to our video surfaces including LED wall and pixel strips.

“At the same time, the media server also sends cues to our lighting desk for color/intensity across our fixtures, while also receiving triggers from our lighting console to perform actions like strobe the video walls, go black, or perform other actions. There’s a lot going on behind the scenes here, but our team is a bunch of talented mad scientists who come up with incredible ideas and have the skill to pull them off over and over again.” 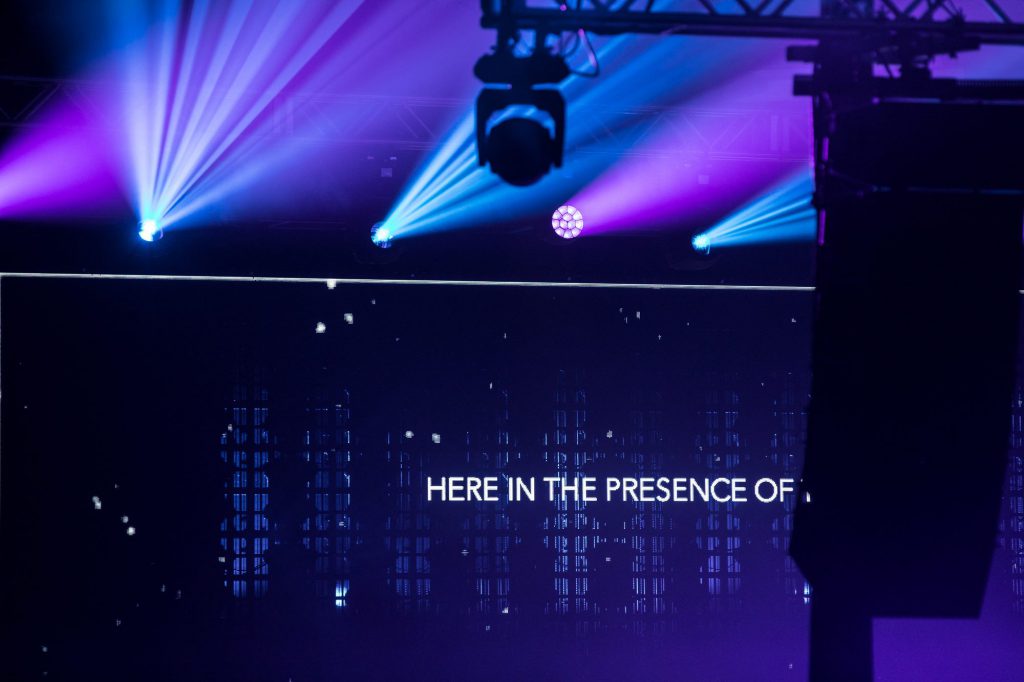