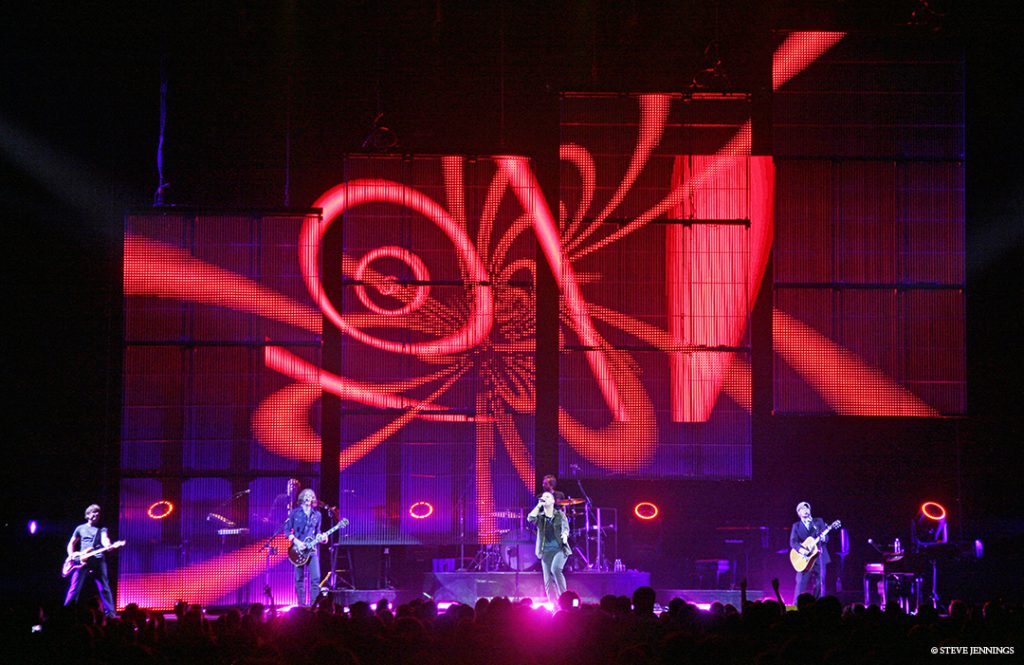 Like many in his profession, this Beverly Hills based lighting designer started out wanting to be a musician. Music, he says, still flows through his veins. This is very evident in the melodic quality of the work he’s done on tours for George Michael, Metallica, Yes, Jewel, Dream Theater and longtime client Matchbox Twenty. His designs don’t simply reflect his clients’ performances in light, they enter into a rhythmic dance with every song, subtly wrapping themselves around the music, and revealing more and more of themselves with each passing note.

Beyond tours, Richard brings the same rhythmic quality to his work on televised musical performances, such as his designs for Carrie Underwood’s theme songs for NBC’s Sunday Night Football. In addition to television, the Canadian-born LD has built an impressive portfolio in film, including work programming Star Trek: Into Darkness, The Amazing Spider-Man 2 and Marvel’s The Avengers.

At the end of the day, though, it is music that stirs Richard’s heart and creative vision. Speaking to us from the offices of his company, Millennium Lighting Design, he shared some insights into the rhythmic power of light.

In your work for Rob Thomas’ tour in support of his Cradlesong LP, you received a lot of attention for putting digital lighting projectors on a curved backdrop behind a curtain and revealing it in stages as the concert progressed until it appeared in its full glory. Can you tell us a little about why you did that?
“On that tour, the curved backdrop measured 56′ wide x 28′ tall. Adding the tri-parting curtain was a way to play with the concept of a slow reveal. I used the shaping feature of fixtures to highlight different sections of the backdrop before finally opening the curtain completely.”

So, on a broader scale do you think it’s important for designers to hold back some tricks, so they can be revealed later in the show, rather than putting it all out there from the start?
“Yes, I really think so, especially if you’re not touring with an artist that can afford one lighting or video gag per song. It takes some discipline and self-control to take what you have and hold back a little when telling a story, so that you will still have the ‘final chapter’ during the encore.”

You’ve also been widely praised for the way you balance video and lighting. Now that the two are converging at such a rapid rate, it seems that maintaining this balance is more important than ever. How do you achieve it?
“Most of the time, the video concept for a song will drive the bus, and lighting will follow. I like to flip the script and force the lighting to take the lead role in order to calm the senses. When you have too much video, you end up distracting the audience, especially if the eye candy keeps coming song after song.”

Building on what you just said, is there a type of fixture that is most prone to being over-used?
“That’s actually something I never really thought about, but if there’s one thing that can be over-used in our industry, I would say it would be the subject of blinding the audience in a way that bothers the viewer. At times, this has gotten to the point where I’ve seen people actually wear sunglasses during a concert! Certain fixtures are totally annoying when they are over-used to light the audience. The goal is to make sure the artists see their fans, but I always try to find ways to show a happy audience as opposed to a blinded crowd that can’t see the band they paid to watch.”

A great deal of new technology has been introduced to the lighting industry over the past ten years. When you encounter new technology, does it give you new design ideas, or is it just a matter of making it easier for you to execute ideas that are already in your head?
“There have been times when new products immediately led to some of my all-time favorite designs. I really like to be inspired by new products.”

What do you design in?
“The latest version of Vectorworks Spotlight and LIGHTCONVERSE Visualizer.” 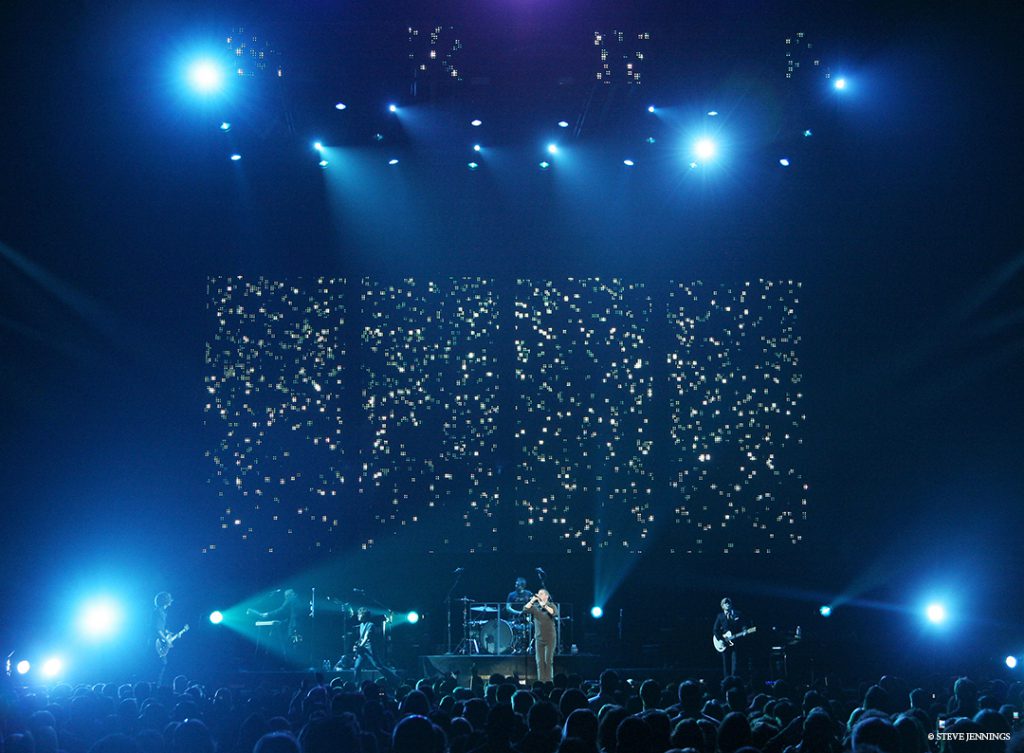 How did you get started in lighting, and on a personal level what drew you to it? Was it an intellectual decision or an emotional one to get in this industry?
“I was always a very frustrated musician. I understood complex time signatures, but I was never going to become a drummer. I could play guitar, but I was never going to be a virtuoso string shredder. But one day, it came to me that I could play the visual component of a live concert just like an instrument. That was very exciting to me because I could visualize what the audience was hearing.”

How do you get inspired at the start of a project? Does this differ if you’re working on a tour as opposed to a TV project?
“Not surprisingly, given how I answered the previous question, it’s music. I have music flowing through my veins, so I’m always inspired and excited at the beginning of a live music project. TV and movies are a completely different beast because I’m helping and living someone else’s dream, but I’ve been super proud to be involved with amazing motion pictures like Marvel’s The Avengers, Star Trek: Into Darkness, Iron Man 3, The Amazing Spider-Man 2, Tomorrowland and the upcoming movie Bright.”

From a creative standpoint, what is the most challenging part of being a lighting designer?
“Without a doubt, managing creative expectations while making sure you don’t break the bank. That has always been the main challenge for me. Some artists –and their managers– want their show experience to be unique, with the latest and greatest technology, until you show them real world quotes from vendors.”

Earlier we mentioned Rob Thomas. You have been working for him and Matchbox Twenty for close to 20 years. Do you see your lighting as providing a historical narrative for him and the group? Or is each show more like a fresh start?
“With Matchbox Twenty and with Rob Thomas solo, we have definitely discussed how to top ourselves from previous tours. I am very proud of the progression we made each time we designed the next adventure.”

In addition to designing for Matchbox Twenty, you’ve worked for a variety of artists like George Michael, Jewel, Metallica and Aerosmith. Aside from listening to and understanding an artist’s music, is there anything that you try to get to know about him or her at the start of the design process?
“Everything starts with what has been done in the past, i.e. what they liked or disliked about their previous designs or what other designs have they really noticed from other bands. Also, I always have a chat about how they like to apply certain colors to certain songs based on feelings and emotions.”

How do you handle creative disagreements with clients?
“At the end of the day, the customer is always right! So, it’s my job to make sure the artists and their management always feel in control of their visual experience.”

You’ve also done quite a bit of television work both as a lighting designer and a programmer, including your design for NBC’s Sunday Night Football with Carrie Underwood. Can you tell us a little about that project?
“The cinematographer for the SNF open, Chuck Ozeas, has trusted me to come up with an exciting live performance environment for four of the five years that Carrie Underwood has been on the show. We shoot it as a music video every summer at the end of June, and it’s been a great experience for me because I’m a big fan of the game –and the Patriots! For this year’s Super Bowl, we shot a very special intro with a new song that will be used in sports highlights for the next 30 years!”

If you had to sum it up in five words, what is at the essence of a good lighting design?
“Always Keep Them Wanting More!” 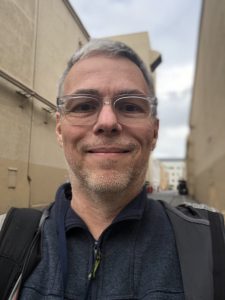 Who were the biggest influencers in your career?
“It’s a three-way tie! I’ve always mentioned that I was a big fan of Tom Littrell and Alan Owen, because they laid the foundation of what moving lights could do with Genesis.
But being originally from Canada, I have to say that Howard Ungerleider was always at the top of his game with Rush. I also cannot express enough gratitude to John Broderick, who taught me so much during my time with Metallica.”

How would you like to be remembered as a lighting designer?
“That guy doesn’t need time-code to play lights!!!”