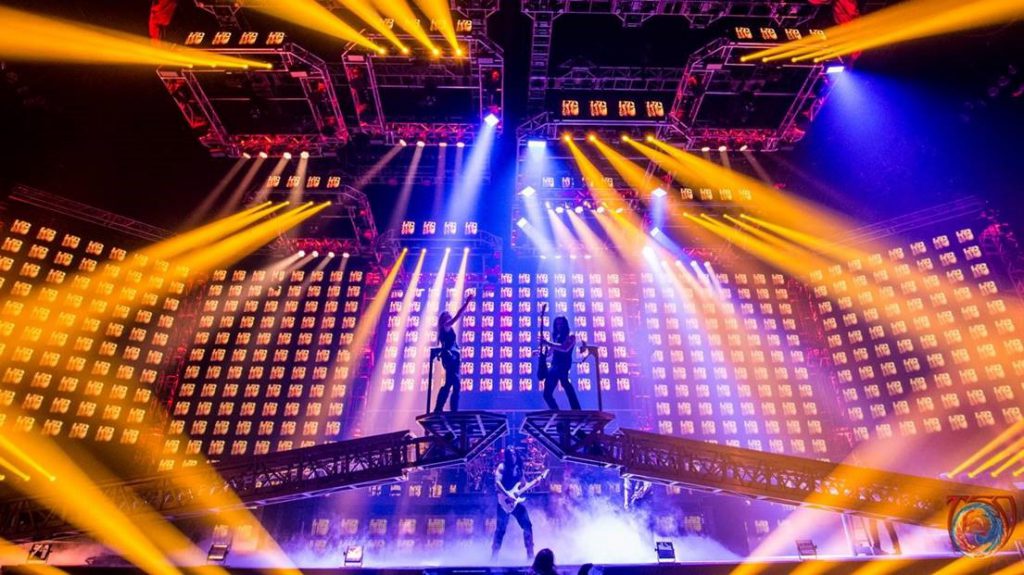 “The only way to do great work is to love what you do,” wrote Steve Jobs. The Apple cofounder didn’t have lighting design specifically in mind when he penned this quote, but he accurately described the creative wellspring that this Las Vegas-based LD has used to keep the Trans-Siberian Orchestra’s holiday light show looking fresh, original and surprising year after year for 18 years.
Mixing projection video and LED panels in ways that go beyond standard practices, pushing the envelope to use pyro as a lighting element, and defying convention in innumerable other ways to create larger-than-life lighting designs, Hartley has made each and every TSO light show a unique visual feast. When asked where he draws his inspiration from for his continuous flow of creativity, his answer was disarmingly simple: “I love lighting design.”

Hartley’s love of lighting has led him to create some extravagantly beautiful designs in the almost two decades he’s been with the Trans-Siberian Orchestra. In addition to his opulent TSO light-scapes, he’s designed for a range of stars, from KISS and Aerosmith, to Megadeth and Meat Loaf and Chris Brown. Through it all in project after project, his sense of enthusiasm has been reflected brilliantly in his designs. We caught up with Hartley as he was preparing for the next TSO show to talk about his designs and the passion that fuels them. 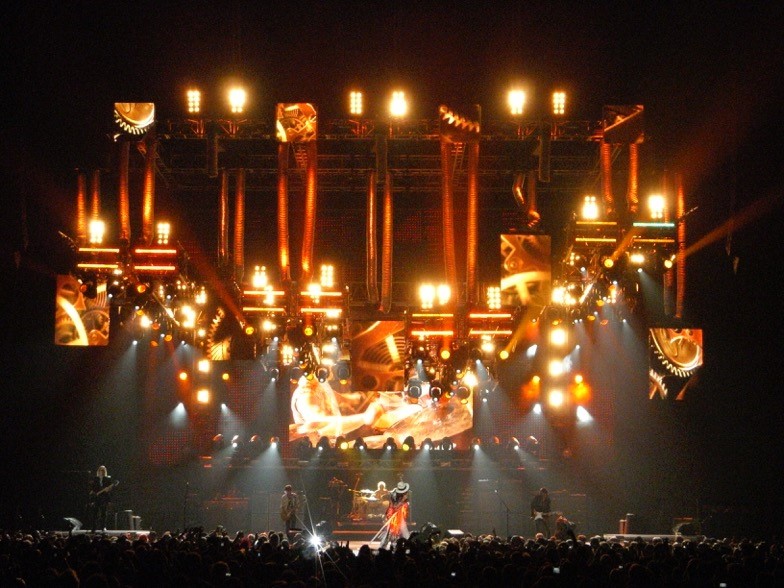 You started designing for the Trans-Siberian Orchestra 19 years ago, but you already had an impressive resume before that time. Were there any earlier projects that you drew upon for inspiration or ideas when you did your first TSO design?
“I did a lot with KISS for years before I jumped into TSO, so sure that was an influence that shaped my work. There was a lot of ‘big light’ looks with KISS and a lot of pyro, which I love, and that all came into play with TSO.”

So you were designing for KISS and doing a lot of other things, then TSO happened! How did that all come about?
“Paul O’Neil! He’s the creative force behind TSO, as you know – the producer, the writer everything. I have known Paul since the mid-‘80s when he was in some bands that I was lighting at one time or other. He called me and said, ‘Hey man I go this thing I’m doing.’ Then he explained his vision for TSO to me. I listened to the music and said, ‘Wow this is meant for lights!’ When we started out with TSO, it was just one truck and one bus on each tour. Of course it’s grown quite a bit to say the least.” 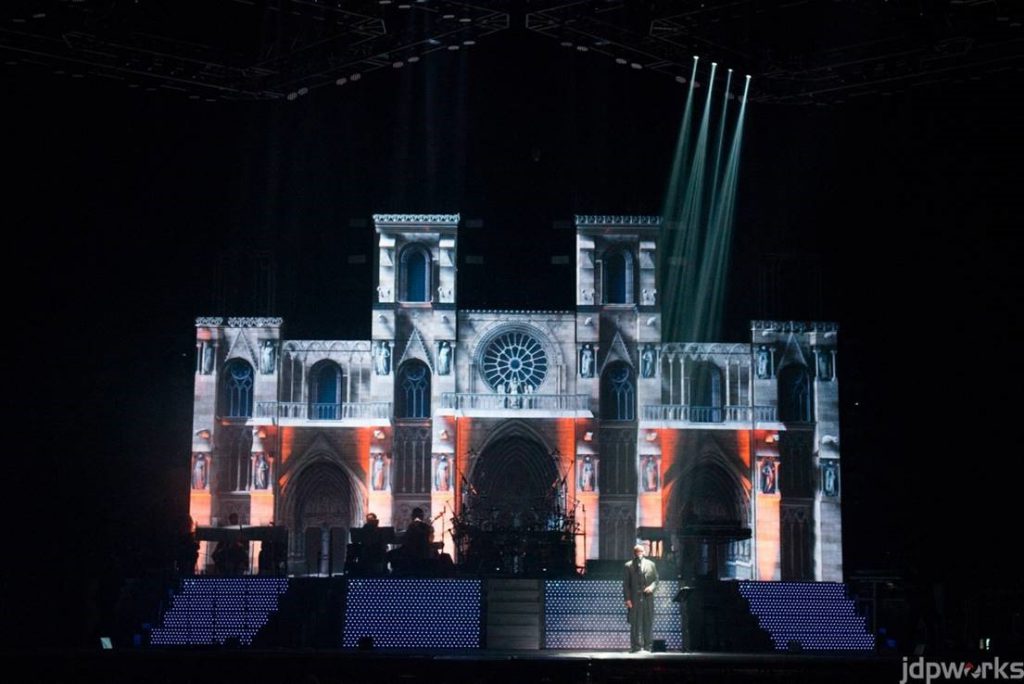 It’s been 18 years, since you started designing TSO shows – and you’ve designed them every year since. That’s a long time, but your designs are always fresh and original. How do you keep the show’s creative edge?
“Good question – from year one to year 12, it was pretty easy, because technology was just exploding and we could always up the ante by adding more – more lights, more video, more media, more pyro. Technology is still moving ahead, but it’s not in the big leaps that you had, so you can fall into a been there/done that routine unless you push yourself and everyone around you creatively. You come up with new ways to use basically the same gear. For example, projection mapping isn’t new, but we create new ways to use it where there’s a sense of discovery and surprise like we did when we projection mapped a castle in our show. Of course Paul is always pushing new imaginative storylines, so that makes it easier to keep our creative edge in how we use lighting.”

Can you walk us through the process of a TSO lighting design? Once you get the storyline from Paul, how does the process start for you? What are the things you look a first?
“I get the idea for the show in my head – and it’s really hard to describe how in the world that process happens! Once I have it really down, I will make a movie of what I am thinking and show it to Paul. He throws in the video with Nick Militello, the video guy. So Paul comes up with the story first and then we work on how to turn that into a production.” 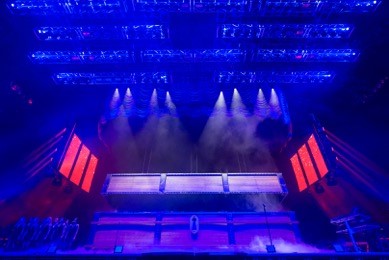 It may be impossible to answer, but in general how do you get inspired? Long walks? Music? What gets your creative juices flowing?
“The music really, that’s what turns me on. Plus I love my job so that inspires me –not just with TSO, but all lighting. I love lighting design. I do a lot with Megadeth –I can spend a whole year with them and it wouldn’t get old, because I love the music and love what I do. It’s easy to get inspired when you love lighting. Outside of work, hiking and hanging out with my daughter recharges me.”

One more TSO question if we may, when do you start designing next year’s show?
“Ha! As soon as one year’s show ends, I start thinking about next year.”

You’ve been widely praised for being able to create sweeping scenes in your designs, almost like a classical painting. Did you have any training in art? Is there any painter in history who you think would have made a good lighting designer if he or she were around today?
“Funny you ask. I really wish I could have been artist who draws freehand, but I don’t have that skill. I’ve been to the Louvre; it’s awesome. I think maybe da Vinci would have been a good designer. He was pretty cool.”

We’ve heard you describe yourself as an “old school beam guy,” and indeed many of your designs have been characterized by amazing beam work. Why do you like beams so much? What is it you feel they bring to a design?
“It was how I was raised as a lighting designer. I came of age with beams and always liked their visual power and the energy they bring to a design.” 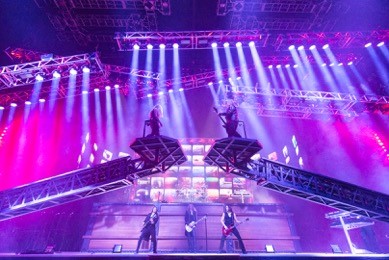 Something that’s always impressed us is the way you’re able to create texture and depth with your beams, positioning them at different heights, hitting the same space with beams from different angles. Do you use beams to add dimensionality to a stage?
“Yes for sure. There is definitely a lot to be said for layering beams and having them hit the stage from different angles. What it all comes down to with beams is positioning. You don’t just put up a lot of beams out there and overpower the stage. The way you get looks is by positioning them in a way that makes sense for your design.”

You’re also quite known for your use of pyro; can you tell us what you think pyro contributes to a lighting design?
“Pyro changes everything. It adds a whole new element to your design. You do accents with pyro and create really memorable scenes with it that you maybe can’t do with anything else. For example, I had a clock that I wanted to be on fire. We had pyro shoot up from behind it and video on the front side. When the massive amount of flames shot up from behind the center of the clock, it just sort of made everyone stop and say ‘wow!’” 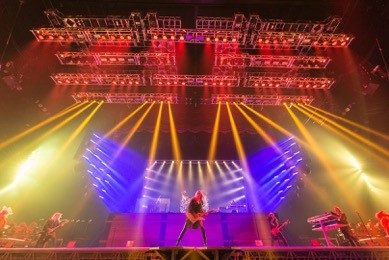 Can you overuse something like pyro?
“Sure, you can overuse any tool. As designers, we all should remember that sometimes less really is more. There are times during every show when I hold back and don’t really cut loose with everything. I want to save some looks for later, and I also want to use the power of negative space to create a mood. It all depends. You get a feel for this as a designer.”

You use both LED video walls and projection video. What’s your feeling about that?
“I love projection, because it lets me do so much, but it’s also effective to mix walls and projection. For TSO, I had a castle where the wall was all projection, but the windows were LED panels. So if you’re in the audience, the windows light source was facing you, but everything else was shooting from the front. It created a very realistic perspective as if someone inside the windows is looking out at you. Anytime you can used different tools to create a unique perspective, it is good design.”

What do you design in?
“Cinema 4D – that’s what I draw stuff in. Then I piece it together in Final 4 Pro. Once that’s done I go to my Cad who can put it all in Vectorworks.”

What would you have done if you weren’t an LD?
“I had a band in high school, which is how I got into lighting. So if I weren’t an LD, I would probably be in a band.” 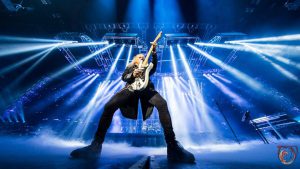 What was your band?
“It was called High Voltage. We would play week long gigs covering groups like AC/DC, Def Leppard, and Van Halen. We were together about three years. Then the band broke up and I was sitting there with these lights that I built, not knowing what I was going to do with them. Then my friend was with the band Nantucket. They wanted lights and someone who could work them, so I signed on. They had just opened for AC/DC. It was through the same friend that I hooked up with Joan Jett, which is really how my career took off.”

As a former band member yourself, do you think you have to like a client’s particular music to do a good job lighting it?
“That’s a funny question…I’m sure it always helps if you like your client’s music.” 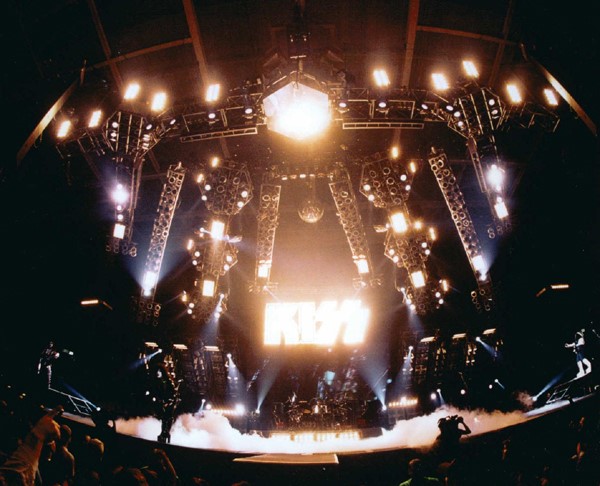 You’ve had an amazing career beyond TSO, winning awards, working for a long list of iconic artists. What do you regard as some of the highlights?
“I enjoyed the 15 years I spent with KISS. I would like to go back in time and do my KISS stuff over with the technology that’s available to lighting designers today – Wow! Of course TSO is great and so was Aerosmith. My most fund job may have been the Chris Brown thing.”

Who were the big influencers in your career?
“Phil Ealy, who did Guns N’ Roses and Kenny Chesney, John Broderick ‘JB,’ who did Joan Jett – they stand out.”