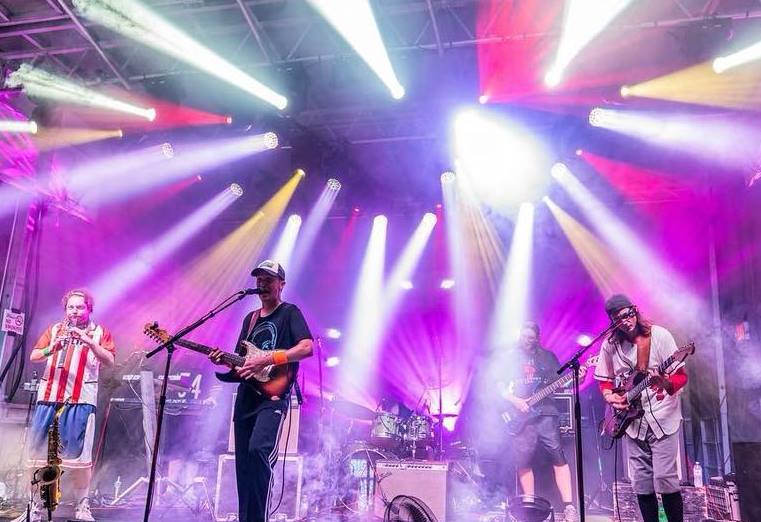 DENVER – Home Grown Music Network’s former Album of the Year winner Big Something has elevated genre-hopping into a rarified art form. Even by jam band standards, this laid-back sextet darts in a mind-boggling array of directions, not only during the same show, but also in the same song. Cameron Grogan, the band’s longtime lighting designer, has become adept at following his client as they move with seeming ease from funky rock rhythms to chirpy pop melodies, fusing horns, guitars, synths and harmonies into their musical smorgasbord.

Grogan’s skill was very much on display at the seventh annual Big What, a three-day jam festival sponsored by the band. Working the main “What?” stage, he supported his client’s musical gyrations with sweeping stage washes, rapid color changes, an endless assortment of aerial effects and a bag full of other tricks. Helping him was a flexible collection of CHAUVET Professional fixtures, supplied in large part by 81 Productions.

“This was a very high-energy festival,” said Grogan. “The large crowd really connected to the headlining band. There were a lot of good feelings, and the band really felt free to move out in different directions. Our lighting reflected the spirit of the show. We did a lot of audience lighting and aerial lighting with our Rogues. We also had an upside-down pyramid video wall run by Soup Williamson of Life Is Art Studio that created a lot of different looks.”

Grogan accented the video wall centerpiece by coordinating it with eight Rogue R2 Spot fixtures. “We followed the shape of the upside-down pyramid with the Rogues,” he said. “The output of the Rogues was bright enough to show up fine against the video wall. Working the lights off the wall added depth to our Stageline SL100 stage.”

Also adding depth to the stage were the 12 Rogue R1 Spot and 12 Q-Wash 260 RGB moving fixtures that were flown on four truss fingers that fanned out from upstage to downstage. “We alternated the Rogues and Q-Washes on the fingers,” said Grogan. “This gave us a full spread of spot and wash light from above to create a bigger look on stage.”

The overhead fixtures also were used for downlighting and specials, allowing Grogan to highlight individual band members. Backlighting from the Rogue fixtures positioned around the video wall enhanced the dramatic effect of Grogan’s design even further.

“The prism on the Rogue R1 Beam was awesome when indexed per position,” said Grogan. Also awesome for three hot August nights this summer was a bright and colorful lightshow that followed this very eclectic jam band without ever missing a step. 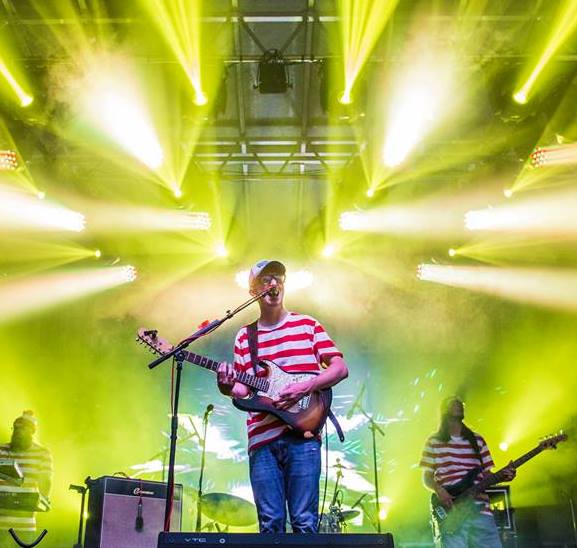