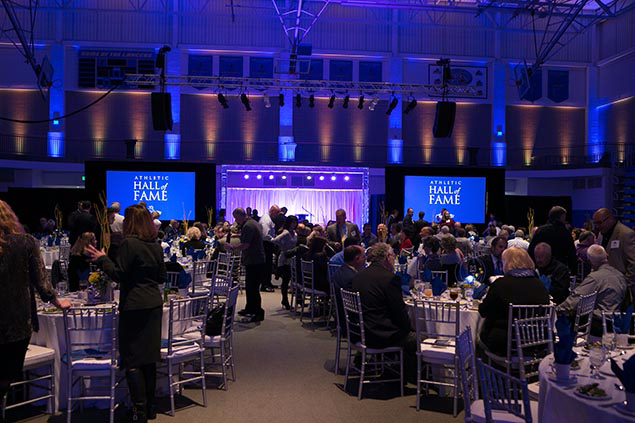 WORCESTER, MA – Worcester State University’s athletic department has had a lot to celebrate lately.  Not only did the school just open a stunning $45.5 million, 100,000 sq. ft. athletic facility on campus, its teams also reached new heights, winning their first ever men’s indoor track and field conference title along with a women’s soccer championship.

“Lancer Pride” was on full display recently at the school’s Athletic Hall of Fame Awards ceremony. Making the event all the more special was an elegant and colorful lighting design by ATC Audio of West Springfield, MA. Relying on a collection of over 100 CHAUVET Professional and CHAUVET DJ fixtures, the ATC team of Matt Jugenheimer, Tom Schneeloch, Kyle Douglas and the staff at Worcester State University turned the new athletic facility’s gymnasium into a stylish banquet hall for the event. 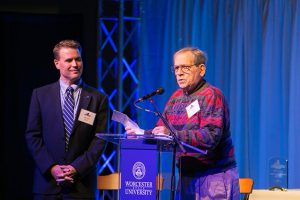 “This was the largest number of lights we ever brought to a site,” said Douglas, who notes that ATC also took care of the video and sound for the ceremony. “The school was excited because the new athletic facility had just opened, so we wanted to create a look that really stood out without being overbearing. The rich colors we got from our fixtures really helped make this a reality.”

The ATC team relied on six Ovation LED ellipsoidals and eight SlimPAR Pro RGBA fixtures to create a clean professional look on the awards ceremony stage.  A pair of Ovation E-910FC, RGBA-Lime color rendering ellipsoidals and four Ovation E-190WW warm white units were flown on FOH truss about 20’ from the stage. “We had to position the Ovations pretty high to avoid sight line issues and maximize their custom glass gobos,” said Douglas.

Backwashing the presenters and award recipients on stage were eight SlimPAR Pro RGBA par style units. Working in harmony with one another, the SlimPAR and Ovation fixtures created an evenly lit stage that made it easy for the audience to connect to the proceedings. 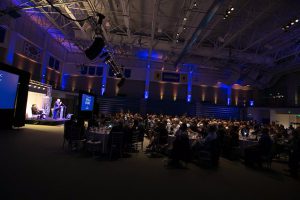 “Being that this was held in a gymnasium, we wanted something warm on stage that would draw people in,’ said Douglas.  “The Ovation fixtures really gave us a flat even field with no shadows, which made the stage easy to look at.”

Enhancing the visual appeal of the stage were six COLORado Batten 72 Tour RGBA linear fixtures that were used to uplight the backdrop, and EZWedge Tri RGB fixtures that served as truss warmers.

An additional collection of about 90 EZWedge fixtures were used to uplight the exterior of the building, as well as the wall that lined the track area that encircled the gymnasium- turned- banquet-hall.  Creating a ring of light above the banquet area, the EZWedge fixtures illuminated the wall’s columns in deep blue and the space between those columns in warm amber. Ambient light from these fixtures spilled over to parts of the ceiling to give the entire room an inviting and intimate glow, allowing guests to forget that they were sitting in a gymnasium.

“The EZWedges, being battery powered, allowed us to do some impressive uplighting in the track area,” said Douglas. “At times there was no ambient light besides what the EZWedges were putting off. This created a very special look, which as exactly what we were after.” 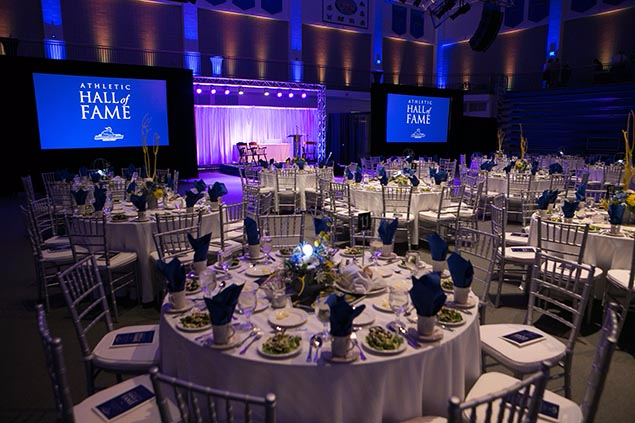