CARDIFF, UK – Those who follow The Haus Band will find a lot to like about this up-and-coming funk sextet’s new music video, but for one group of fans in particular there’s a specific track on that production that will be especially meaningful for years to come. These fans are the students from the University of South Wales Lighting and Technology department, who were given the opportunity to operate the lights for a music video shoot by The Haus Banda at The Wales Millennium Centre on April 16-17.

The lucky students got to use a variety of consoles, including a ChamSys MagicQ PC Wing to run a David Howard- and Dominic Boston-designed rig that featured over 50 moving lights, including CHAUVET Professional Maverick and Rogue fixtures. Aside from getting the chance to operate this impressive gear, the students garnered valuable insights into the lighting design process.

“It was really nice to lead a project with students from conception, though programming and production, to completion,” said Howard. “It’s something I had not yet done on a university project of this scale. It was also nice to see pre-visualised programming come to life on a real rig, something ChamSys MagicVis allowed very easily. The process took students through the whole design process, providing insights into real world practices.

The process emphasized the importance of helping clients achieve their vision. “The Haus Band wanted a big festival look for the video shoot. Yet budget limited what could be included in the rig,” said Howard. “What’s more, this look had to be created without the benefit of a video wall – and it had to be done in a set space.”

Howard and Boston addressed this challenge by breaking from tradition and eschewing standard horizontal truss looks. Instead, the designers went with a more angular truss configuration that featured angled bars and fingers extending from the compact center stage structure.

Angled outward at 30°, the truss structures created an on-camera impression of space and depth. The sticks reached upward and outward in an arc, allowing fixtures on them to make three concentric half rings in the air. Hanging fixtures on the rings also created the impression that the lights were floating against the dark backdrop. This arrangement enlarged the look of the rig, without sacrificing its sense of intimacy.

“With concentricity at its heart, the rig draws attention inwards, towards the band, from any camera angle or wide shot,” said Howard. “The band were housed in front of an archway of fixtures that are physically visible but are hung discretely, a shape that harks to traditional elements in funk music, as well as dancing clubs of the past. This structure provided eye candy for camera, as well as aerial beams – both wide and narrow — to offset negative space.”

Howard and Boston positioned eight Maverick MK2 Wash fixtures on the overhead raked truss fingers. From this position, the washes were used to provide back lighting as well as pixel eye candy and tightly shaped animated beam looks.

“Being run in full pixel mode in this position, the MK2 Washes provided a punchy surface to pixel map content over, as well as allow for glossy animated looks for camera,” explained Howard. “Their zoom provided an alternate look to the face of the fixture as well as the in-air appearance. The sheer speed of their zoom was an effect in itself. We used zoom on stabs in the song to highlight musical accents.”

On the back arch was a collection of eight Maverick MK1 Hybrid fixtures that were used mainly as spots to fill the blank canvas behind the band. “Our design was such that all visuals relied on light elements; no set or video was used in the shoot,” said Howard. “The Hybrids behind the band provided not only textured backlight, but large, concentric on-camera beam looks. The ability to mix a convincing warm white with the CMY flags allowed these heads to provide a suitable mood to the contemporary funk sounds of The Haus Band.”

A mix of four Rogue R1 Spot and four Rogue R2X Spots, supplied by Enlightened Lighting, was also used in the overhead rig. These heads, combined with the MK2 Washes, allowed Howard and Boston to create a versatile festival-style rig overhead that the student lighting designers could use to achieve a variety of looks.

For those students, the experience running lights for The Haus Band was an excellent educational opportunity. They could take pride in knowing that their work also resulted in a music video that any funk music fan will find well worth watching! 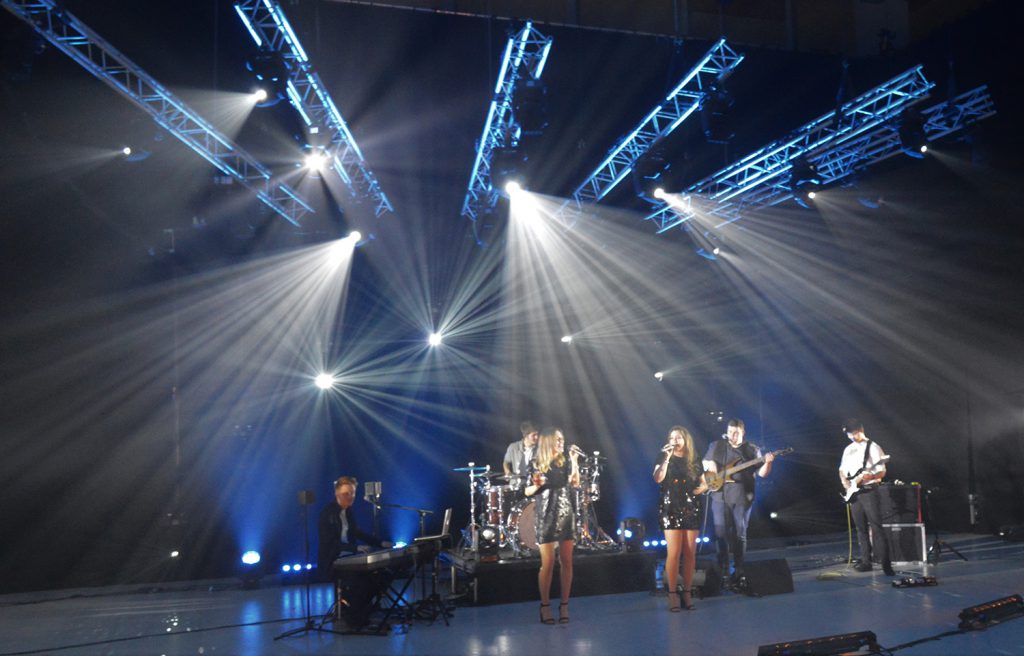