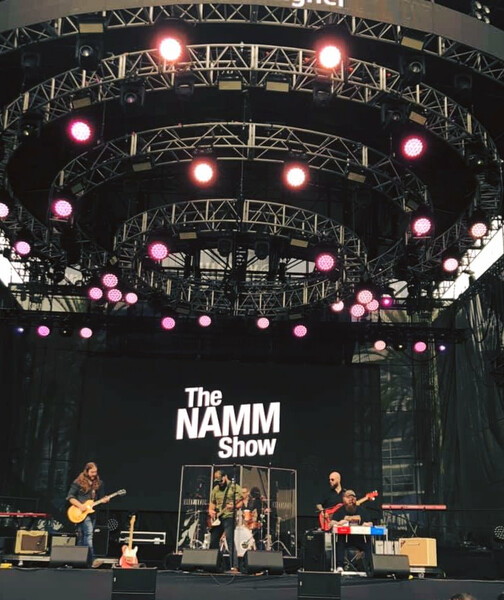 This was clearly evident last week as recording stars from a wide range of genres like Animals As Leaders and country music’s Josh Gallagher took to the Grand Plaza Stage in the pavilion at the convention center entrance for a series of day and night performances sponsored by Yamaha.

Endowing the stage with brightness and color to give it a tour-like feel for the 100,000 or so show attendees was a powerful rig supplied by 4Wall Entertainment that featured a collection of 58 CHAUVET Professional Maverick MK3 Wash fixtures.

The wide zoom range (7° to 45°) and color rendering capabilities of the RGBW moving LED fixtures were critical to keeping looks on the stage varied throughout the four-day long NAMM show, while their output ensured that it glittered even during daylight hours, as well as for the night concerts, which were designed by Rob Koenig.

Jonathan Daroca of 4Wall Entertainment, who served as Assistant Production Manager/Lighting Designer and Thomas Pendergrass of NAMM, who worked as the Programmer & Assistant Programmer also contributed to the success of the Grand Plaza Stage shows.

“It was an honor to have our Maverick MK3 Wash fixtures selected to light the stage at a convention that draws so many music industry professionals,” said Albert Chauvet, CEO of Chauvet. “We’re happy that we were able to provide an exciting visual backdrop to so many great performers.”