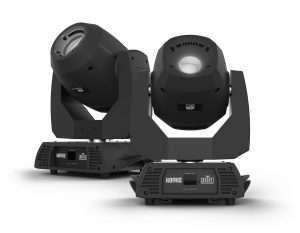 “The R2X and R1X both are true to the Rogue spirit of putting rugged, roadworthy fixtures within reach of the average budget,” said Albert Chauvet, CEO of Chauvet. “However, we stepped things up with the Rogue R2X and Rogue R1X, so our customers can add extra punch to their shows even at larger venues.”

In addition to their impressive output (11,000 lumens for the R2X Spot and 6700 lumens for the R1X Spot), both fixtures offer a range of performance features designed to spice up any show. The R2X Spot, for example, features a 16.5° beam angle, two variable scrolling color wheels with seven colors and split color capability, as well as a 3-facet prism and smooth gobo morphing between its dual gobo wheels.

“Designers will be able to create an unlimited number of shape-changing and split color effects with the R2X Spot,” said Chauvet. “These capabilities, along with the fixture’s incredibly bright output, rich colors and 16-bit dimming make it a versatile design tool.”

The Rogue R1X Spot is also a creative powerhouse, with its motorized iris and focus for beam shaping, 16° beam angle for crisp gobo projections and a color wheel that features eight colors, split color ability, and continuous variable-speed scrolling. Adding to its versatility are its dual gobo wheels with seven interchangeable gobos, as well as its 3-facet prism for stunning aerial effects and 16-bit dimming for smooth fades.

The R2X offers a selectable LED maximum output, allowing it to match Rogue R2 Spot fixtures that are already in a rig, while the R1X can be matched to existing Rogue R1 Spot units. These features should come in handy, since the two powerful new fixtures should be occupying prominent positions in more than a few Rogue rigs in the months ahead.