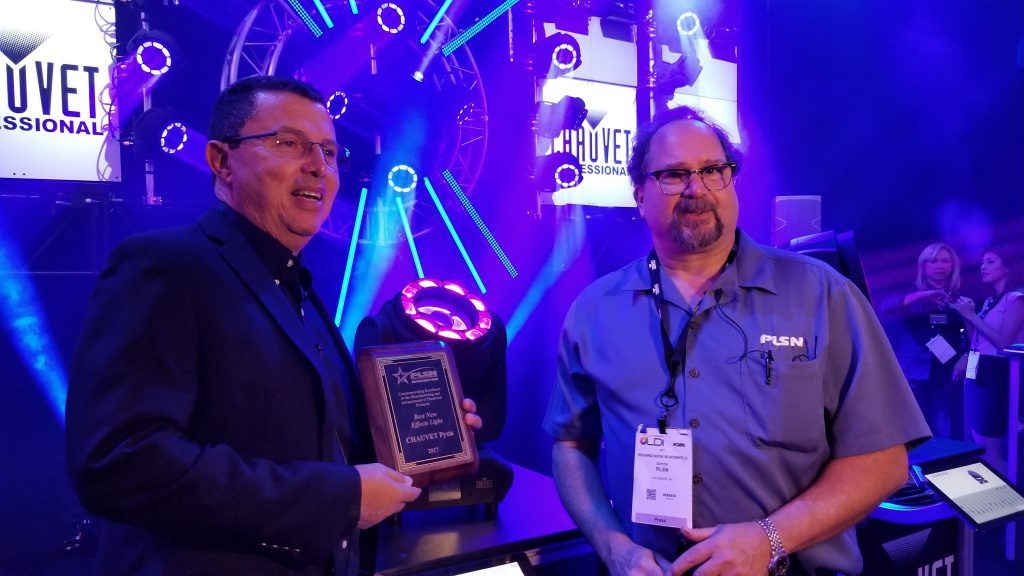 LAS VEGAS – CHAUVET Professional’s design team felt that they broke new ground earlier this fall when they introduced the multi-functional Maverick MK Pyxis, a unique eye candy effect that can do double and triple duty as a wash or beam. Now they have a shiny new accolade to support this belief, as they earned the first ever PLSN Gold Star Product Award for Best New Effects Light at this year’s LDI.

“As a lighting designer, I’ve seen a lot of fixtures attempt to do all of the different things that the Pyxis does, but none have done it quite as well,” said PLSN editor Nook Schoenfeld, who presented the award to Albert Chauvet, CEO of Chauvet. “With its center pixel and outer ring, the fixture can create some unique looks. At the same time though, it’s not just a gimmick. The beam, wash and pixels all look really good.”

At the center of the Maverick MK Pyxis is a single homogenous 60W RGBW LED with a fixed 3° beam angle. Surrounding this pixel is an outer ring made up of nine 15W RGBW LEDs with a 7°-45° zoom angle. Working together, the center pixel and outer ring are capable of creating a dizzying variety of captivating beam, wash, atmospheric and set piece effects.

“We introduced the Pyxis with the idea of opening new creative possibilities for designers, whether they’re doing smaller live music events or arena concerts,” said Albert Chauvet, CEO of Chauvet. “Having this fixture recognized with a Gold Star award from PLSN means a great deal to those of us who have worked hard to bring this fixture to life. We’re honored and humbled.”

The Maverick MK Pyxis has already been used by The Lighting Design Group (New York) on MTV’s TRL program and by Creative Production & Design (Austin, TX) on the Louis The Child “Last To Leave” tour. “Based on what we’ve seen of this fixture, it should be appearing in a lot of places,” said Schoenfeld. “Congratulations to the Chauvet team for nailing this one.”