CARDIFF, Wales — With a capacity of 4000 guests and two stories of nonstop action, it’s easy to see why the Cardiff University Students’ Union is clearly the largest nightclub in its city. The popular venue attracts some of the best international acts on a regular basis, as was evidenced recently by an event featuring top UK DJs Chase & Status.

“The R1 Beams are an absolute workhorse of a beam light,” commented LD Matthew Dunford. “The small size and punchy source make them great for fitting around set/screen elements, and the dual prisms are fantastic for filling space with aerial effects.”

A further eight Rogue R1 Washes were positioned on truss towers to provide the dancefloor with a myriad of saturated wash colors and effects. “The sheer speed of the R1 Wash is ideal for snappy position changes and movement effects, while the wide zoom gives them extra versatility, particularly for big random strobe looks,” said Dunford. “What’s more, they were also able to provide a quick backlight for MCs and onstage performers.”

Dunford also positioned 10 COLORdash Batten-Quad 12 fixtures throughout the room to provide colorful eye candy. The linear RGBA wash lights also gave the team a canvas for some pixel mapping content to coordinate the looks of the lighting and video screen.

To round out the rig, six CHAUVET DJ Intimidator Hybrid 140SR fixtures were specified to work in unison with the larger Rogue fixtures. “This was my first time using the Hybrids in a larger space and I was very impressed,” commented Dunford. “On beam mode they gel nicely with the R1 Beams, while the zoom, especially when used with the prisms, allows for ultra-wide space-filling effects that I did not think would be possible with a fixture at this price point.”

In the second room of the Students’ Union, SR Production Services continued the visual consistency by once again selecting Rogue fixtures to provide a number of looks. This time, however, the more powerful Rogue R2 Beam fixtures, with their Osram Sirius HRI 230W lamp, provided the intensity required to deal with the challenges of the room.

“The upper floor at this club is always a challenge, as the large block of screen coupled with the white walls make for very high ambient light levels,” explained Dunford. “The R2 Beams were the perfect solution, as they managed to cut through the noise even on the most saturated reds and blues.”

As a result of Dunford’s strategic deployment of CHAUVET Professional and DJ fixtures, the spaces around the main LED screens around the DJ booth weren’t just able to be filled, perhaps more importantly all the elements of the stage and its surroundings were able to be connected together as one powerful visual package. 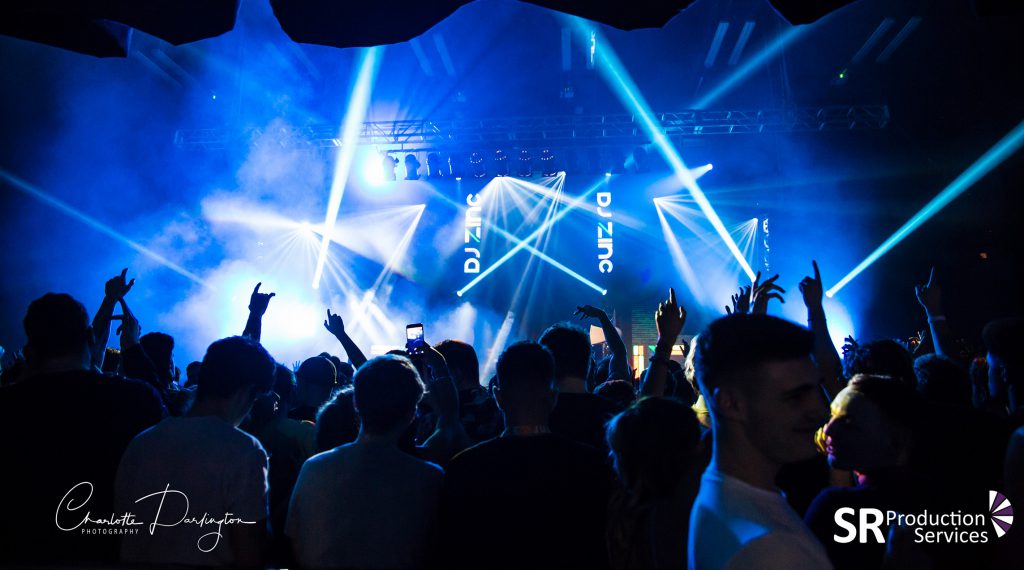