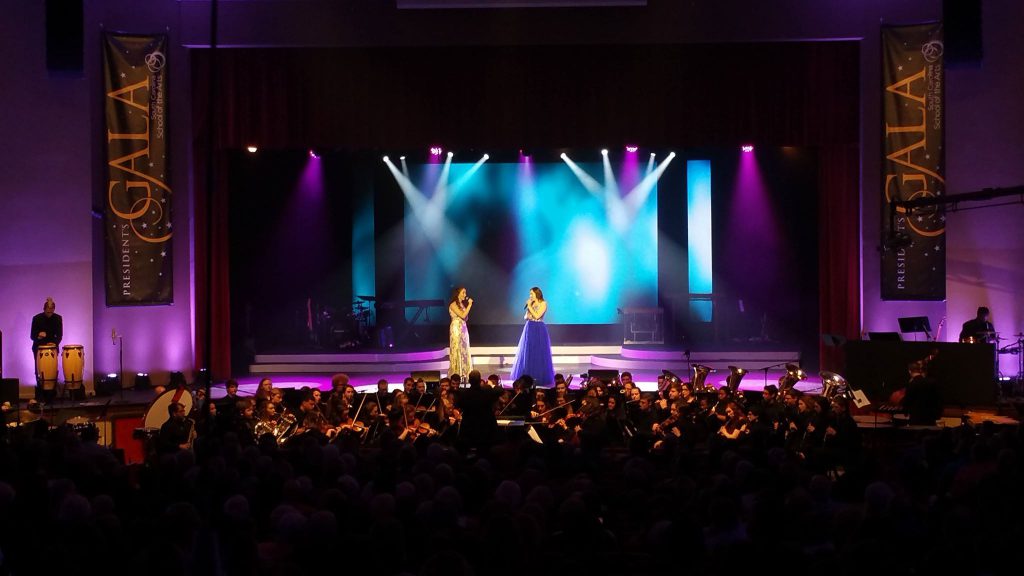 ANDERSON, SC – The term “president’s gala” may conjure up images of staid speeches and a formal dance, but nothing could be further from reality at Anderson University’s South Carolina School of the Arts. The culmination of the academic year at this renowned art institution, its President’s Gala, is a rousing evening of musical diversity that moves seamlessly from West African drumming and dancing, to orchestral and choir compositions, to show tunes.

Providing a visual backdrop for this far-ranging event, which took place at the school’s Rainey Fine Arts Center on April 21, was a richly textured and flexible lighting/video design by ACS Sound and Lighting that featured a collection of CHAUVET Professional fixtures and LED video tiles.

“Jay Pitts, the new producer of the President’s Gala, brought our company on board to help enhance this event with extra artistic flair that could support its diverse performances, while making it camera friendly for television,” said Denise Simpson of ACS Sound and Lighting. “We’ve worked with Jay on many events in the past and we understand his vision. I was the lighting designer and board operator for the event, working closely with Chris Hansen, the director; Andrew Allday, the video designer; and Daniel Fisher, the video director.” 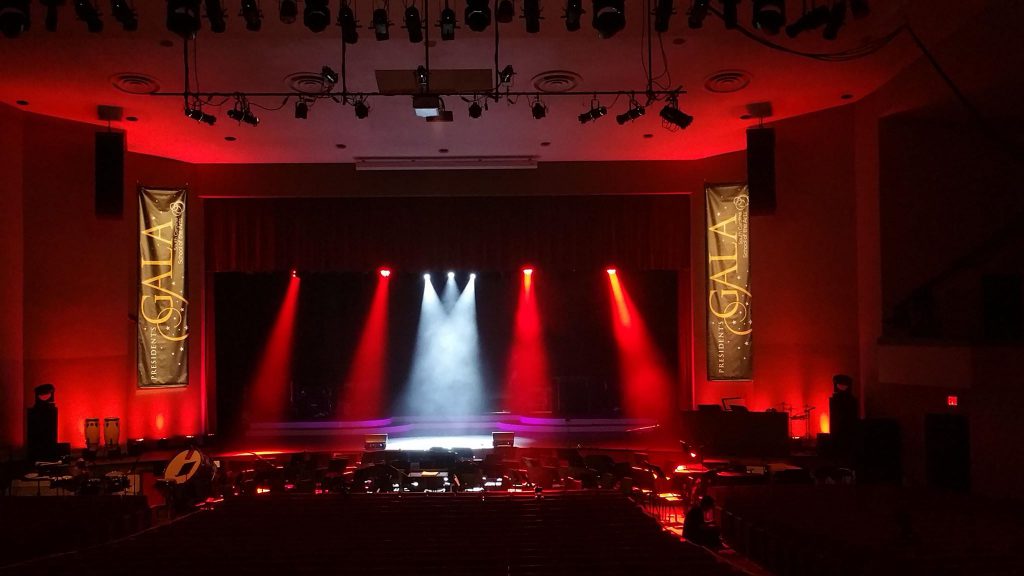 Key to the flexible lighting design at the President’s Gala were the 16 Ovation E-910FC color mixing ellipsoidal fixtures with HD 19° tubes that were flown on the FOH truss. Used as the main stage wash, as well as for band specials, these RGBA-Lime fixtures made it easy to change the mood on stage to reflect different musical styles by shifting color palettes.

“The E-910FCs provided a very nice, solid wash with a nice color temperature that reflected very well on camera,” said Simpson. “I have a fondness for the consistency and smoothness of the Ovation line of fixtures and the crispness of the HD lens tubes.”

Adding color and depth to the proscenium stage and enhancing visuals for the television camera were the rig’s COLORado fixtures. The ACS team deployed 16 COLORado 1-Tri Tours to the light the proscenium wall and an additional 24 units to complement the architecture of the room and add depth and fullness to audience camera shots.

The ACS design also included four COLORado 1-Quad IP fixtures on the first electric, eight on the FOH truss and four on dance booms, which were positioned downstage left and right.

“A challenge we faced in this project was dealing with the height of the borders,” said Simpson. “This house has dead hung borders and had a very limited fly space, so this meant that the fixtures were really no more than 14’-18’ off of the deck. Not to mention we also provided risers that were 18”. At times, we had 100+ performers on stage, so this made stage washes a little more challenging because of the lack of fly height. It also somewhat limited me on flyouts into the audience, and vanity things of that nature. The even output of the COLORados helped us meet this challenge. To compensate for the lack of height and depth, I also added a few extra fixtures to get the coverage that I needed.” 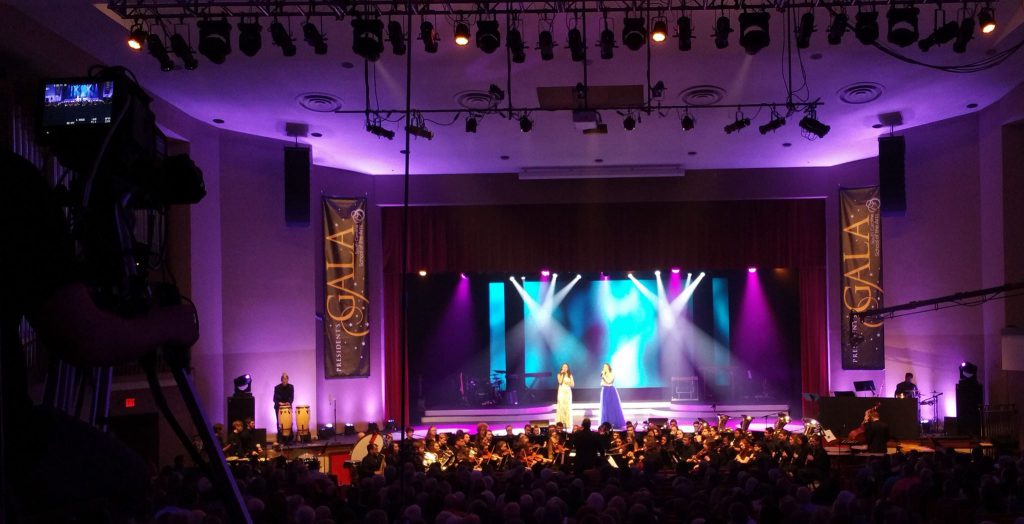 Pulling the design together by providing a colorful and thematic framework was an LED video wall flanked by two video columns, all made with 91 PVP X6IP tiles. The wall and columns were used to enhance the graphical backdrop for the performances and add texture, depth and motion to the stage.

“The video screen not only contributed to the artistic imagery, it also helped to open up the set by breaking up the darkness of the stage drapery,” said Simpson. “Andrew Allday’s use of color on the columns and animated content on the wall really added a nice glimmer and gleam to the show without taking away from the performers.

“All of us involved in this event shared a primary goal of creating something that complemented the performers on stage and brought the vision of the director and producer to life,” continued Simpson. “Secondly, we wanted to provide dramatic enhancement, yet not take away from the performers on stage as it is their time to shine. Thirdly, we wanted to be sure all of this translates to video for broadcast and preservation.”

Based on the looks of the President’s Gala, the design team succeeded in meeting all three of these goals. On its website, Anderson University describes this free event as a “gift to the community.” The wonderfully diverse entertainment made it just that – and the stunning looks created by the design team ensured that this gift was beautifully wrapped.