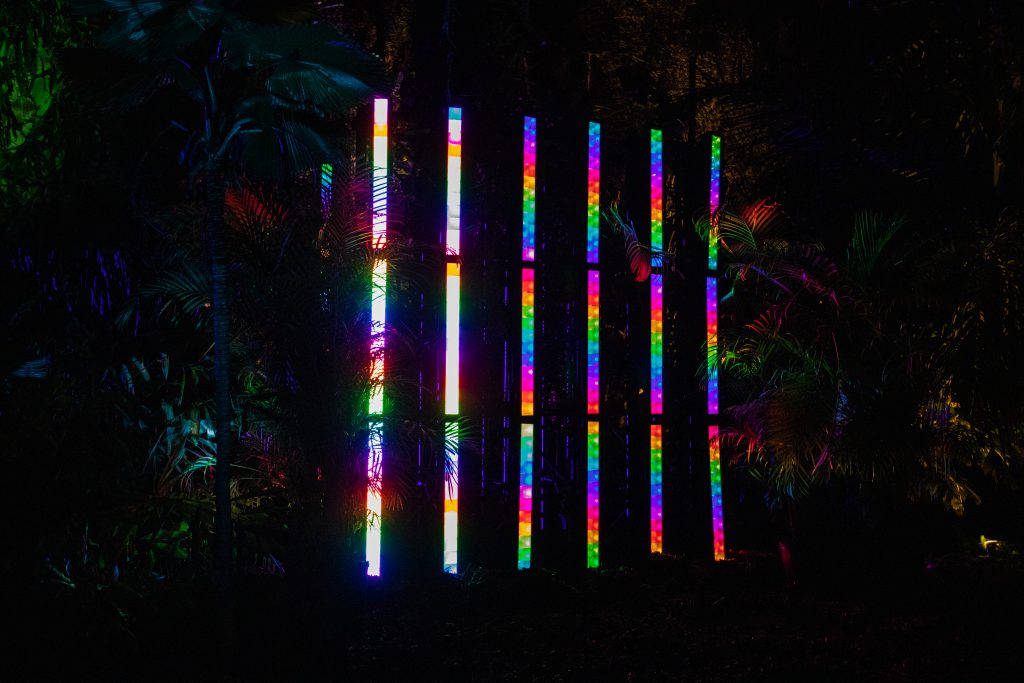 CORAL GABLES, FL – By day the Fairchild Tropical Botanic Garden outside Miami is alive with vibrant color from the thousands of flowering plant species that bloom within its 83 acres. This holiday season, the world-renowned facility continues to glow even when the sun goes down, thanks to “NightGarden,” an illuminated walk-through exhibit produced by Kilburn Live that invites visitors to step into an enchanted world of purple palms, holographic butterflies, talking trees and other dazzling creations.

Endowing the exhibit with a transformative array of colors, textures and illuminance is a multi-dimensional Chris Werner lighting design anchored by over 360 CHAUVET Professional fixtures, including COLORado, COLORdash and STRIKE units. These and other luminaires in the 48-universe light and video display were supplied by 4Wall Entertainment.

For Werner, owner of Chris Werner Design, this challenging and exhilarating project began with a 90-minute phone call with Max Painter, Creative Director of NightGarden. “Max was in London, and our call occurred quite late in the evening for him,” recalled Werner. “We shared an appreciation for some recent large-scale public art projects, and a love for collecting travel stories. Following our chat, Max suggested a follow-up with the producing team at Kilburn Live. So, I met with the company’s CEO/Executive Producer, Mark Manuel, and Producers, Jonathan Sanford and James Samson. They described a project that was incredibly appealing to me in terms of its location, the environment, the scale, and the opportunity to create something new.”

The lighting design process for NightGarden began with determining the color palettes that would be most prominent in the exhibit, a process that led to the selection of cooler hues, notably blues, greens and cyan. “Once we had the general color plan down, we focused on the concept and storyline Max had laid out for the guest experience,” said Werner. “Our concept was built around the unique attributes of Fairchild Tropical Botanic Garden. With this arc and aesthetic in-mind, we set out to find lighting fixtures, effects, and positions that would tell that story.”

Werner’s goal was to ensure that each phase of a visitor’s journey through the exhibit was visually different from the phases that preceded it. Toward this end, almost all of the fixtures lighting NightGarden are creating a constant flow of different looks.

In many cases, this change is the result of subtle color and intensity adjustments. However, there are also moments of more dramatic variations as a result of pronounced pan/tilt movements, or through the sudden appearance of custom gobos created by Lucy Dixon that depict animals and fantasy characters.

“Creatively, we all felt that the exhibition needed to feel ‘alive’ like the gardens surrounding it,” said Werner. “We chose effects that made it seem as if the exhibits are breathing. We relied on a lot of slow pulses and gentle undulations to create this effect.”

Key to colorizing this dynamic, ever-changing panorama were the 224 COLORado 1 Solo, 48 COLORado 2 Solo, and 40 COLORado M Solo fixtures that bathe the exhibit in a variety of colors. “We relied on the COLORados to uplight many of the trees that populate the garden,” said Werner. “They were our workhorses and clearly the glue that held the design together, enhancing our immersive effect with color.”

The 24 COLORado Solo Batten fixtures in Werner’s rig are used to create a wall of light near the exhibit’s entrance. “We affectionately referred to this area as the ‘Selfie Wall,’” said Werner. “Our vertically-oriented COLORado Solo Battens are attached to a truss structure with a silhouetted NightGarden logo. The area in front of the illuminated display is lit for photography, supporting the visitor’s thirst for Instagram-worthy selfies. Needless to say, it’s been a big hit with visitors.”

Another popular spot is a large open space midway through the NightGarden called the “Dance of Lights” that features 12 different two-minute music selections reflecting the different moods evoked by the exhibit. A captivating time-coded light show supports the varied emotions in this musical interlude. Accenting the display is the warm white light from 18 STRIKE 1 fixtures.

“Within the Dance of Lights area, there is a cluster of tall palm trees that form an ‘island,’” said Werner. “We consolidated our STRIKE 1s in that area, each fixture uplighting a palm tree. Their warm white output serves as a dramatic contrast to the often-cool color palette of the exhibition. They’re brighter than most of the wash fixtures in the rig, so they definitely stand out!”

Temporarily installing heavy fixtures within the garden required a customized mounting solution, and Werner credits the team at 4Wall Pennsylvania with designing and fabricating brackets that strap securely around the trees without damaging the trunks. Each bracket is fitted with a baby stud to hold one fixture with a TVMP receiver.

“Jeff Mateer’s team at 4Wall Orlando provided all of the lighting and video equipment, and were great,” said Werner. “Our Master Electrician, Matt Bloom, is a Miami resident and came highly recommended by the folks at 4Wall. Much of the success of the project is due to the tireless work of our two Assistant Lighting Designers, Diamond and Andrew Sosnoski.”

Coming in for special praise from Werner was his Associate Designer and frequent collaborator, Mike Berger. “Mike wrestled the sprawling project into a manageable programming interface and established a logical cueing structure to keep it all organized,” said Werner. “The canvas here is so large, it takes your breath away. It’s very fulfilling to stand in the middle of such an immense space and create lighting looks that cover so much square footage. We’ve painted the entire 360° landscape with color and texture. This is collaborative story-telling on a large scale, and I love it.” 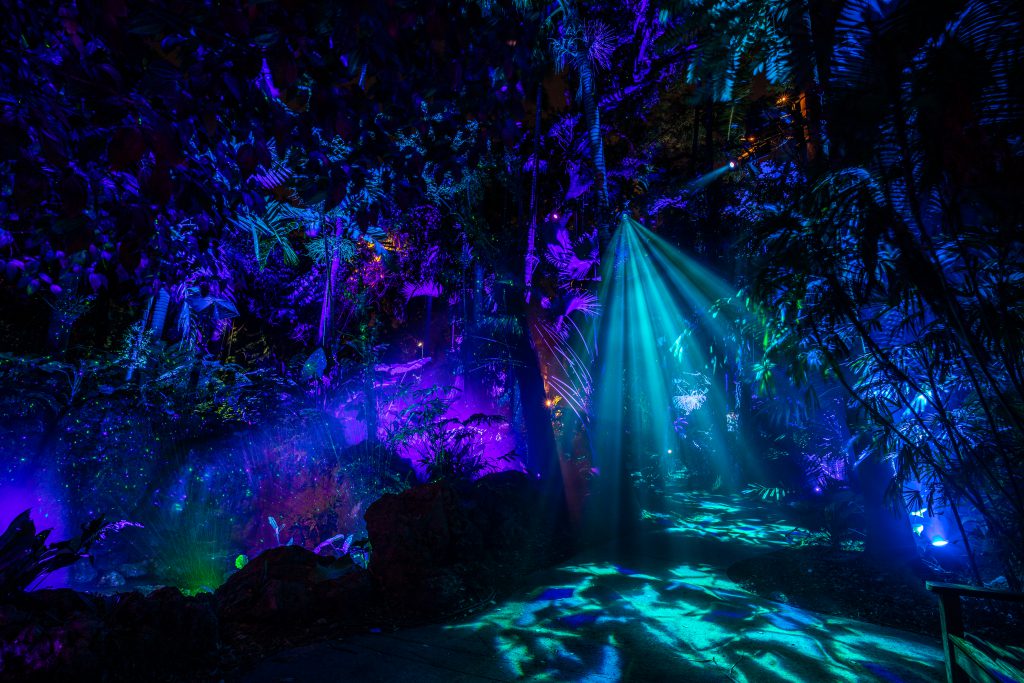 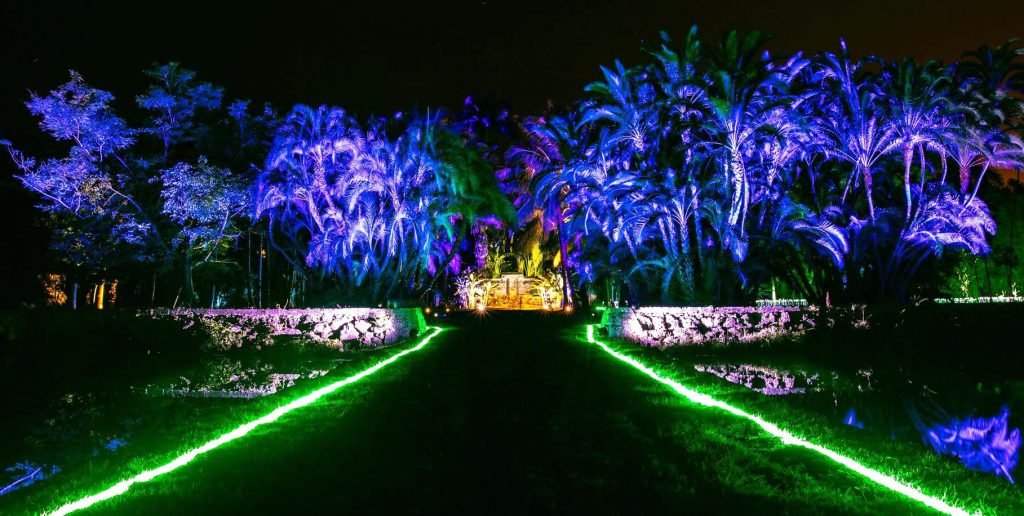