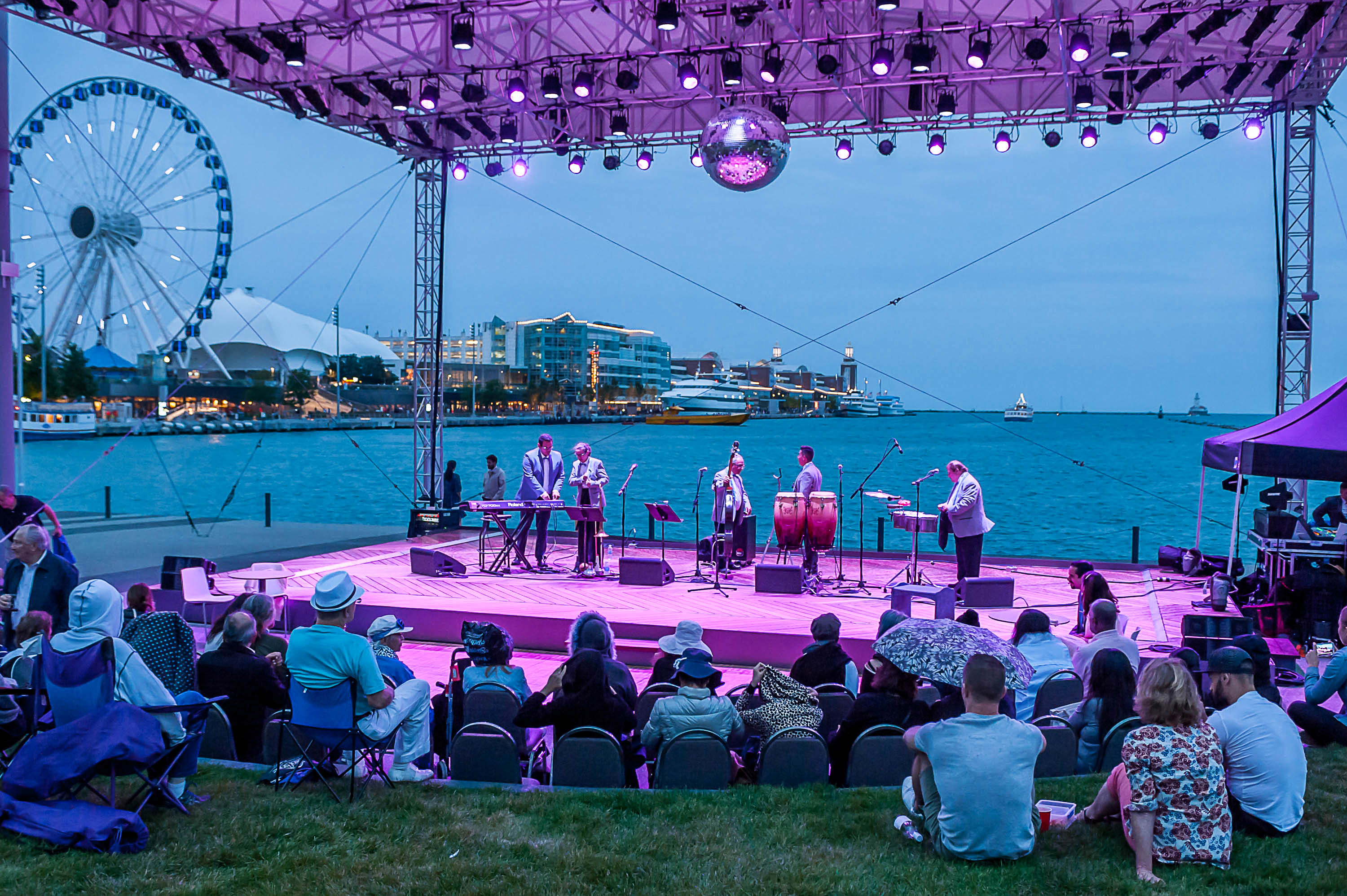 CHICAGO, IL – “An Inviting New Home For Music!” proclaimed a headline in the Chicago Tribune this summer. Like many people in the Windy City, the newspaper’s writers were pumped up about one of their town’s latest attractions: The Lake Stage in Polk Bros Park at the famed Navy Pier. Located on the new Polk Bros Park Performance Lawns at the southwest end of the Pier, the new facility, with its sloped grassy knoll and breathtaking Lake Michigan backdrop, provides an ideal setting for taking in an outdoor concert.

Adding to the impact of this stunning Chicago-style panorama is some colorful and bright stage lighting from 63 CHAUVET Professional COLORado 3 Solo IP fixtures supplied by Intelligent Lighting Creations. Project lighting designer Christopher Wren of Keylight specified the COLORado fixtures because they had “the intensity demanded” by the Lake Stage’s dramatic setting.

“The decision to use these fixtures was based on several factors, all related to the surroundings at Navy Pier,” said Wren. “Being outside and right next to Lake Michigan, we needed an IP65-rated fixture to handle the weather conditions. In addition to that, the zoom range and intensity of the Colorado 3 Solos made them the ideal choice for this application. These fixtures help give us a lot of different looks, and they have the punch to stand out in a Chicago setting, which is a pretty high visual threshold.”

Wren was originally hired as a facilitator through IATSE Local 2 Stagehands to ensure that the package being specified for the new Lake Stage met local specifications. He eventually took on the added role of selecting the actual fixtures, working in conjunction with Intelligent Lighting Creations.

“ILC provided the lighting package, and Matt Perlman from ILC acted as project/sales manager for the installation,” said Wren. “Matt played a huge part in specifying the control network for the project. We did a shootout at ILC between the COLORado fixtures and other LED washes – that was key to determining our fixture choice.”

Wren flew the 60W RGBW single homogenized COLORado beam fixtures on upstage, downstage and side stage truss, using them for backlighting, downlighting and side lighting. Color changes done with the units help blend the stage with its surroundings at different times of day. The fixtures’ colorful washes are also used to set immersive mood changes for musical performances, which often include jazz, such as in “Water Colors,” Navy Pier’s free weekly jazz series during the summer.

“The facility gets a wide range of looks out of the COLORados, from the subtle and sophisticated, to the bold and high energy,” said Wren. “The zoom also is used often to change the coverage areas, from wide stage washes to specials on a single performer. We wanted this to be a versatile lighting system in general, because the stage gets a variety of different performers. We also wanted it to be bright, because performances often begin before dark. And we wanted it to be consistently reliable. The rig we got from ILC gave us all of this and more.”

For its part, the city of Chicago got to add another brightly shining jewel to its crown of music attractions. Or, as the Chicago Tribune wrote when the Lake Stage in Polk Bros Park opened, “music in Chicago just chalked up a significant win.”