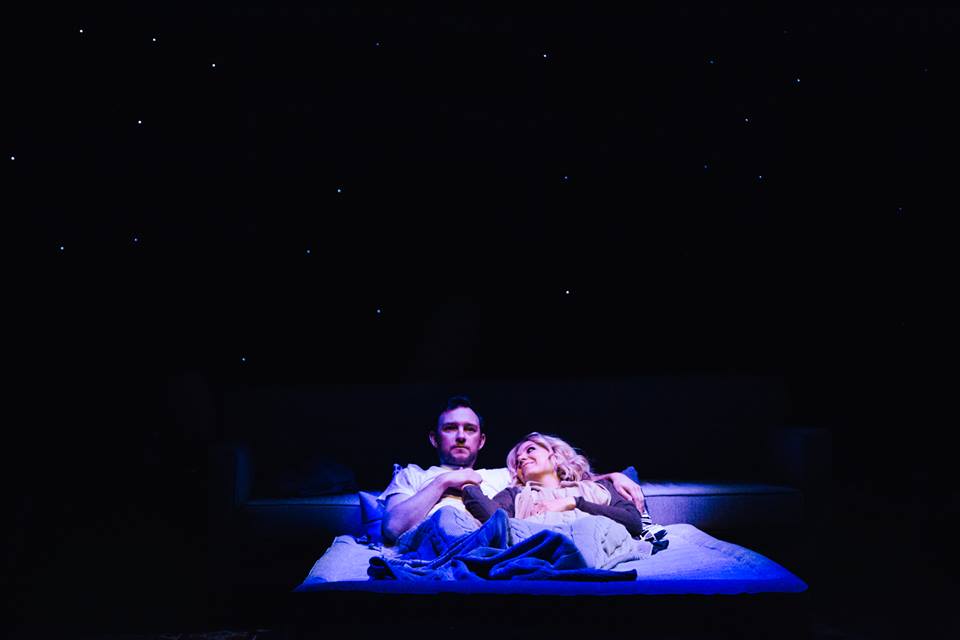 LOS ANGELES – There are times when an essential scenic element in a theatrical production poses special challenges for a lighting designer. Such was the case recently when Daniel Ionazzi was creating the lighting design for the world premiere of the Alena Smith comedy Icebergs, which is currently running at the Gil Cates Theater at the not-for-profit Geffen Playhouse through December 18, 2016.

Directed by Geffen Playhouse Artistic Director Randall Arney, the comedy is set in the apartment of a thirtysomething couple.  To represent this setting, a wooden cathedral ceiling was placed over roughly two-thirds of the stage’s playing space. This was an effective scenic choice, but it eliminated critical overhead lighting positions. Ionazzi came up with a creative way to overcome this challenge by recessing a collection of CHAUVET Professional COLORado 1 Solo fixtures, supplied by 4Wall Entertainment, in the scenic ceiling. 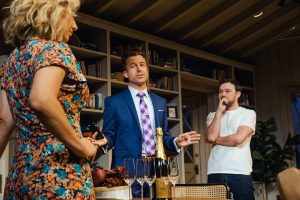 “Since so much of the playing space is covered by the ceiling, it limited our lighting options,” said Ionazzi, who is also the Geffen Playhouse Production Manager. “I was looking for a way to get top lights back into the show. So, I asked scenic designer Anthony T. Fanning if he was ok with us putting recessed lighting fixtures directly in the ceiling.”

Having received the go-ahead for his plan, Ionazzi next had to find a fixture that would not only give him smooth even down lighting, but could also provide colors, light shifts and other theatrical lighting elements, while not detracting from scenic qualities of the ceiling. “We obviously couldn’t have something that looked like a theatrical lighting fixture hanging in the middle of this couple’s apartment,” he said. “Given the position the lights would be placed in, they had to blend.”

Darren Rezowalli of Three-Phase Productions, who is also the Lighting and Projections Supervisor of the Geffen Playhouse, suggested the COLORado 1 Solo as a solution to Ionazzi’s design challenge.  “We had used the COLORados in an earlier production of Barbeque, so I knew what they could do,” said Rezowalli. “Plus I felt that their homogenized light would really work well in this setting.”

Ionazzi agreed, and 14 COLORado 1 Solo fixtures were installed in the scenic ceiling in two rows of seven.  Recessed into the ceiling in light holes with a trim ring underside, the COLORado fixtures deliver an output that looks like the residential lighting found in contemporary apartments.

“The fixtures do give us options,” said Ionazzi. “Their single homogenized output blends nicely and allows us to create the look of a residential light. At the same time, though, they perform like a theatrical light.  We’re getting the quality of the light that we need for theater from them.  We’ve been able to create colors with the COLORados that match our ellipsoidals.” 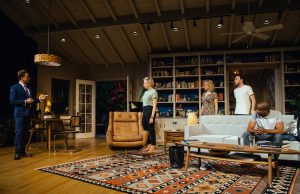 Ionazzi uses the COLORado 1 Solo to convey a sense of time unfolding in Icebergs. “The play takes place over the course of a single day,” he said.  “As we transition from day to night, the color temperature of the COLORados’ light gets warmer and warmer.”

At other points during the play, the COLORado 1 Solo fixtures are used for transformative effect lighting. Drawing on the RGBW fixture’s color rendering, zooming and dimming capabilities, Ionazzi has created fantastical looks that change the perspective of the audience and challenge the imagination. For example, during a scene in the play when the characters break into an improvisational dance to Drake’s “Hotline Bling,” COLORado fixtures move from straight down lighting to saturated color washing and rhythmic cueing.

As the play ends, the COLORados help turn the scene on stage from the couple’s apartment into a floating, celestial other-worldly environment “There is talk throughout the play of global warming,” said Ionazzi. “So at the end when the couple is cuddled up on an air mattress, we turn it into an iceberg. We have the couple floating on this allegorical iceberg through nighttime space. The set is blacked out and we have fiber optics representing stars, as well as the sound of water creating a sense of drifting, and a deep sea-blue color from the COLORado fixtures.”

By that point in the play, the scenic ceiling is no longer seen. The COLORado fixtures, though, remained at home on the set, moving from representing residential lighting in an apartment to evoking images of an ethereal sea.