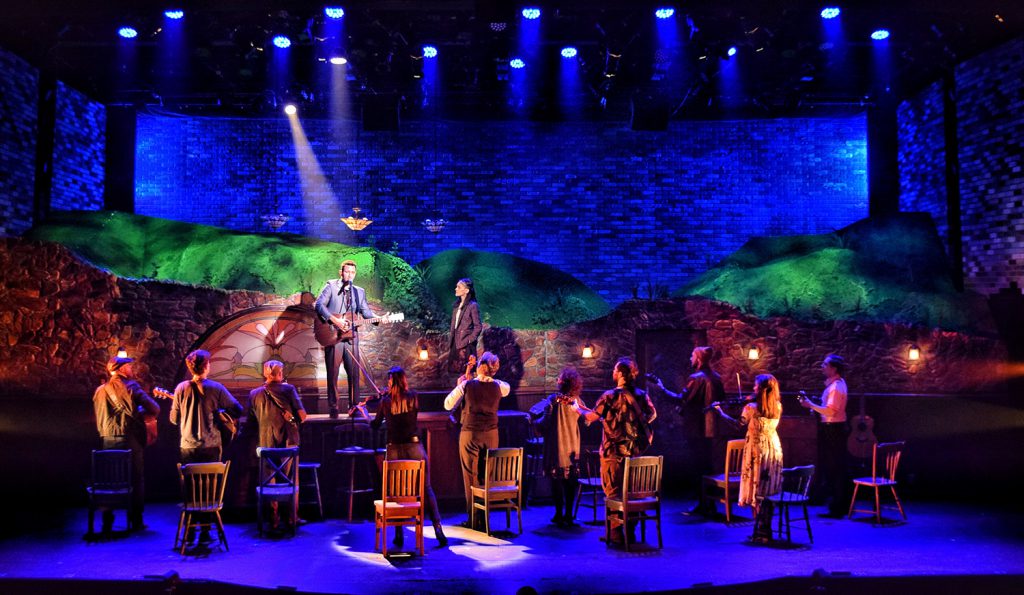 NORTHPORT, NY – Every evening, a half hour before the curtain went up on “ONCE” during its January to March run at the John W. Engeman Theatre, the audience was welcome to step on stage for drinks at the “bar” that’s at the center of this Tony Award-winning musical. That was only the beginning of the immersive experience that awaited them. With an enchanting, impressionistic set and actors who not only sang, but also played musical instruments on stage, the show invited theatre goers to set aside their normal expectations of a musical and embark on a uniquely engaging journey.

Critical to creating this captivating imagery was a richly colored and subtly textured lighting design by Cory Pattak that featured CHAUVET Professional Ovation E-910FC and Rogue R2 Wash fixtures from the theatre’s house rig. The New York City-based designer drew on the output and color rendering capabilities of these fixtures to raise the profile of lighting over what it was in the original production of “ONCE,” which is set in a Dublin pub and tells the tale of an unrequited love involving two musicians.

“Trey Compton, the director, and I had long conversations about the role lighting would play in this,” said Pattak. “In the show’s original lighting design, for which Natasha Katz won a well-deserved Tony Award (one of eight earned by “ONCE”), the lighting was often very subtle. Aside from some color in the background and scenery, the scenes generally lived in a warm or cool white world and the cueing was not overly noticeable, except when it wanted to be.”

The Broadway set also had a fairly realistic looking bar, quite a contrast from the metaphorical scene on the Engeman stage, which together with Pattak’s lighting, expanded the sensory side of the show with new visuals.

“Our set, designed by Nate Bertone, was much more impressionistic than the original version,” said Pattak. “Our Irish pub is located in a cut-out section of rock. Above that rock, the green grassy hills of Ireland were visible. Since the set was less realistic than the one in the original Broadway show, I felt like we could push the lighting to a wider, more varied place and give it a stronger role.”

Pattak endowed the set with the welcoming feel of an Irish pub by lighting it in ambers and oranges. These colors, along with incandescent practicals, accented the wood textures of the set’s bar, chairs and wainscoting, as well as the guitars and piano belonging to the characters. The upper “exterior world” was mainly blues and greens to support the grass and the blue brick surrounding Irish landscape.

“The set never really changes, but we focus on different interior and exterior locations depending on the storyline, so the lighting helped convey those different points,” said Pattak. “Nothing in the set was particularly literal, and the rocks and hillside were always present. We chose some interior settings to ‘box in’ and create more intimate locations, but we never made the bar or the set go away. It was just a matter of reshaping the space.”

Helping Pattak reshape space were the 10 Ovation E-910FC RGBA-Lime ellipsoidals in his rig. He used half of these units for color changing and low cross lighting — his “go-to angle” for lighting shows. He relied on two of the fixtures to create full stage diagonal backwash textures that helped tone and break up the space. The remaining four Ovation ellipsoidals created a textured wash on the grassy landscape over the pub.

“The grass had a dedicated system of green lights that were almost always on, and then sometimes I would add in some blue, purples etc. to give the grass more life,” said Pattak. “This was my second time using the Ovations, and I remain very pleased with the color mixing.”

Pattak also had praise for the two Rogue R2 Wash fixtures that he positioned on FOH truss, using them to create specials throughout the show. “We actually only ended up using the followspots in our rig for maybe four cues the entire evening,” he said. “The angle of the house followspots is not good, and it just didn’t feel right for the show. Since most of the time the vocalists are stationary when they sing, the two FOH movers did specials for all the songs from a much better angle.”

The remaining eight Rogue R2 Wash fixtures were spread out over the stage and did a variety of tight specials and larger washes. “They were great for picking out a single violin player or guitar player,” said Pattak. “There is a small ‘dance club’ section at the end of Act 1, which we decided to have some fun with, so we actually moved the Rogues around like you’d find in a nightclub and create saturated colors. That’s the only time the audience saw the fixtures move.”

While Pattak generally avoided looks that felt too “musical theatre,” there were select moments to embrace the theatricality of the piece. For example, during the performance of the song “Gold,” he really “pushed the saturation and went into that deep congo world with very hot oranges slicing through it.” In the “Gold” reprise in Act 2, there was a very long cue that had the sun rising over the entire cast and set. As this happened, Pattak slowly and subtly harkened back to the strong lighting choice for “Gold” in Act 1.

“Trey and I knew we wanted ‘Gold’ to be our boldest, most saturated piece, so we worked backwards from there, with each successive song in Act 1 leading up to creating a slightly stronger design presence,” said Pattak. “The first song of the show, ‘Leave,’ was essentially one cue and the second one, ‘Falling Slowly,’ was conceptually one cue as well, although there were some small internals just to shift focus.

“We kept saying ‘this is like a play,’ but when we got in there the music moved us to create more ‘musical’ looks,” continued Pattak. “Even though the girl and guy don’t end up together, I see this as a little Irish fairy tale with a setting that has a sense of whimsy to it. I followed this vision and made something that felt a little dreamier, a little bolder, and hopefully a little unexpected.”