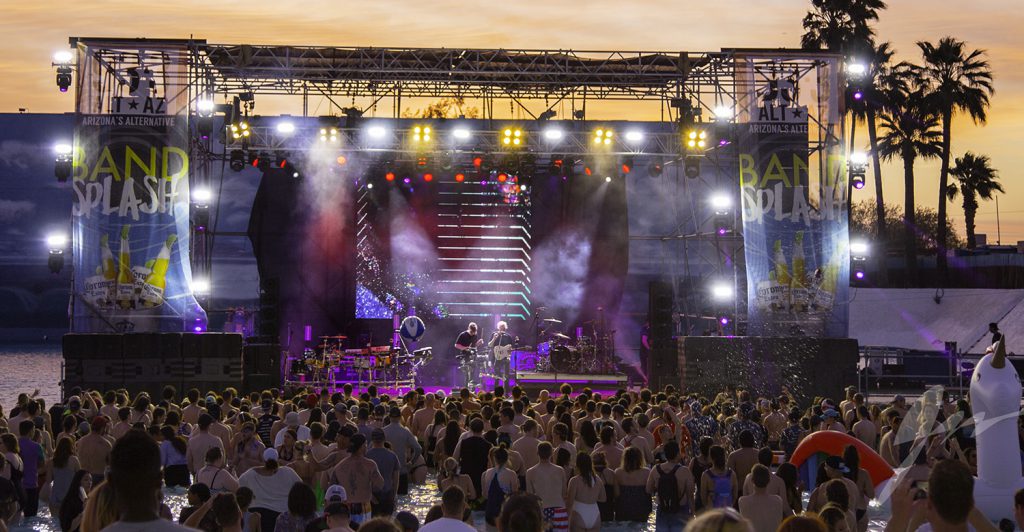 TEMPE, AZ – Summer music festivals have been held high on mountain tops, on island beaches, in city centers and just about every place in between, but few, if any, have taken place at a site as unique as Wet Electric and Band Splash. The back-to-back events may well be the only music festivals featuring major recording artists that take place in a giant wave pool at a water park.

Running on two consecutive days at Big Surf water park outside Phoenix, the festivals are devoted to EDM (Wet Electric) and rock (Band Splash). This year, they afforded fans the opportunity to splash, float, swim or just lounge around in the water while they took in performances by EDM artists like Adventure Club, Bro Safari and SNBRN one day, and enjoyed rock stars such as Dreamers and Robert DeLong the next. Tying it all together was a versatile lighting rig supplied by Creative BackStage that featured CHAUVET Professional Maverick, Rogue and STRIKE fixtures.

“We designed the rig to be flexible enough to use at both festivals, without taking away from the lighting of either event,” said John Garberson of Creative BackStage. “Wet Electric was the first day. When it ended we took away the DJ booth and the side 20mm LED video screens. Then we moved the front deck lighting to the back. Other than that, we used all the same lighting positions for both festivals.

“The versatility of the Maverick MK2 Spot and Rogue R2 Washes in our rig were a major help, allowing us to change up our looks for each festival with features like the gobos and prism of the Mavericks, and the wide zoom range of the Rogues,” continued Garberson. “The STRIKE 4 blinders were nice, because we could create lots of different looks by controlling each cell individually. We had fun shining our lights in the pool area where people were splashing around.”

Garberson and the Creative BackStage team worked their magic on a stage that measured 56’ x 44’ with a 30’ high roof. The pool, the largest wave pool in the US, measures

480’ long by 240’ wide. Safety is a priority for all involved in the event. “We take safety very seriously,” said Garberson. “There are a lot of things fans don’t see that we do in the background to make sure power does not get wet. We also plan for any weather events that may occur. We and the city both have weather action plans.” 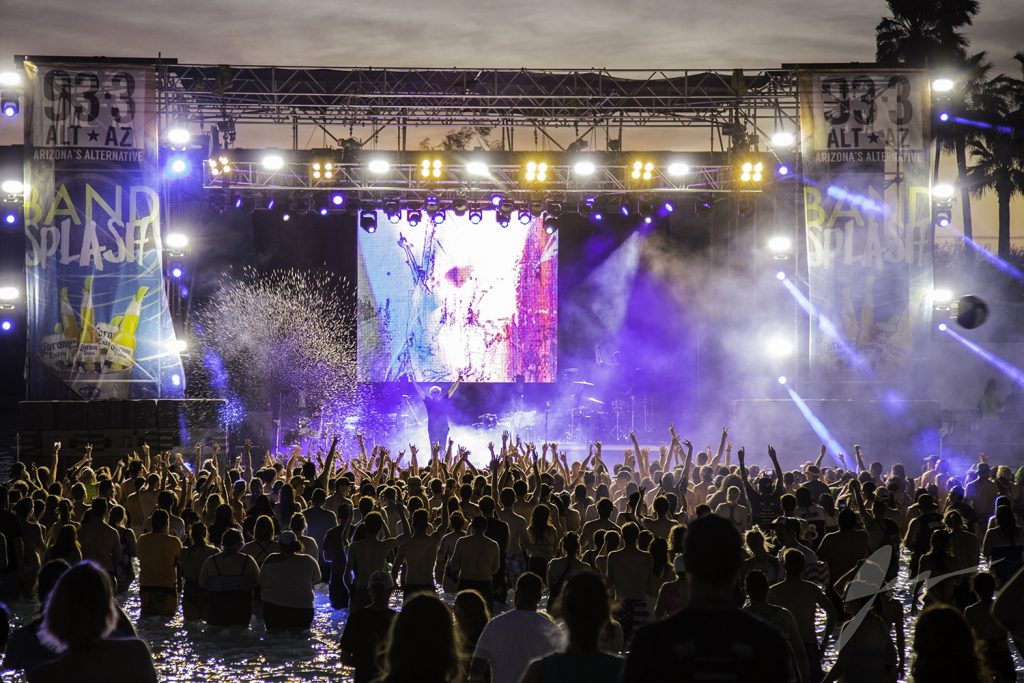 This configuration created a continuous frame of light around the stage that helped focus attention on the performances. The intense output of the fixtures in the rig stood out even against the Arizona sun, a critically important attribute since the festival began at 1 pm.

“Being that this took place in a water park, there is a lot of visual distraction away from the stage,” said Garberson. “Our goal was to make a strong statement with light around the stage. For Wet Electric, the headliner went on as the sun was going down, unlike Band Splash where the headliner was at night. We needed to have a lot of looks that worked during the day. We did that with our LED screens and eye candy from the lighting fixtures. The STRIKE 4s were clearly bright enough to be impactful in the daytime.”

Creating a lighting rig in a water park is not without its challenges. Garberson credits his team–James Simpson, Rita Assi, Maxie Kichler, Jamie Rivera, TJ Watson and Kerry Hutching — with helping the show run smoothly. “There are always some challenges involved with load in and out at this event,” he said. “It’s a very long push from the trucks to the stage. We got that process down to a science in splitting up hands per section from the truck to the stage.”

The challenges involved in setting up this unique event almost prevented it from happening before it even got started. “In our first year, the city didn’t green tag the power until about 30 minutes before the gates opened,” recalled Garberson. “They were leery of an event like this in a water park, but once they understood how the power was going to be run to the stage and also our policy about no one wet on stage, they were fine.”

Neither the city or the tens of thousands of fans who turn out for this unique festival have looked back ever since.