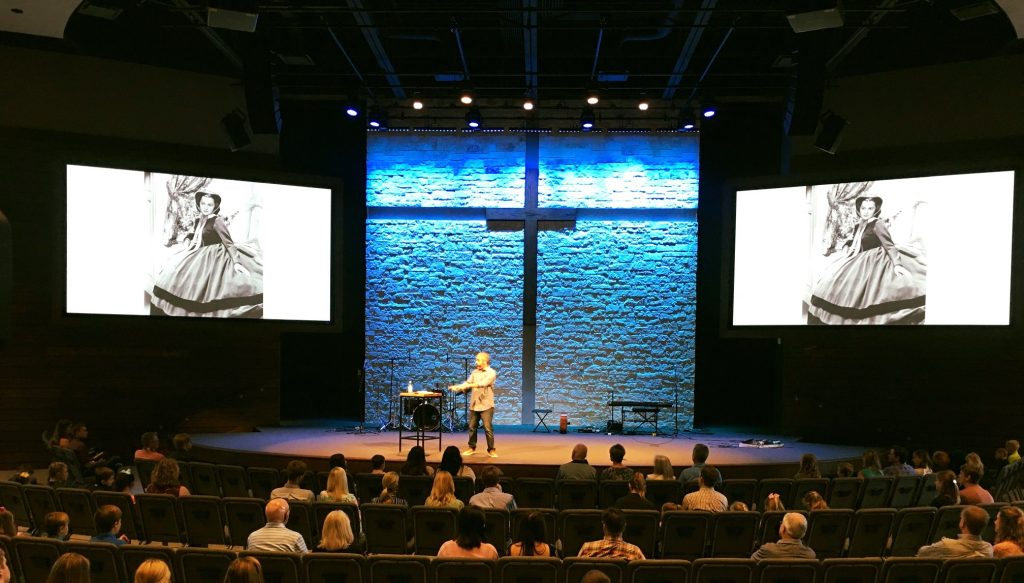 COLLEGE STATION, TX – Excitement was in the air at Grace Bible Church on July 10, 2018 when the building committee presented their first official rendering of the house of worship’s new 45,000 square foot Creekside campus.

For years, the dynamic church had been looking to build a new facility to house its growing congregation in this area just to the southeast of the city. Now, here it was before them, beautifully laid out in the architect’s rendition.

If all went well, the congregation could expect to worship in their new building “by spring 2020.” But, as it has with so many other things around the world, the COVID-19 pandemic brought the church’s plans to a halt in March.

As the construction crew continued to work on completing the campus, worshippers waited patiently for the restrictions on public gatherings to be eased. Then on Sunday August 2nd, more than two years after viewing the architect’s plans, the congregation entered the new church for services, following social distance guidelines.

What greeted them was an elegant, modern, and harmoniously balanced worship space with a semi-circular thrust stage, expansive windows, gently curved walls with attractive stone facades, and an advanced LED lighting system capable of rendering a rainbow of colors, while also provide smooth, even key lighting for even the most sensitive cameras.

Developed around an extensive collection of CHAUVET Professional fixtures, the lighting rig, along with the rest of the AVL system, was installed by the CSD Group. This collection of fixtures includes ten Ovation E-160 WW ellipsoidals on the front bar. The placement of these fixtures was determined with the idea of providing camera-friendly key lighting for the pastor as well as bands and other people who appear on stage

A collection of 12 COLORado 1 Quad fixtures was positioned on the second bar for face light upstage, and on a grid for preacher position back lighting. CSD selected the RGBW COLORado units for their color rendering capabilities, as well as their output, which is great enough to stand up against the two large video walls that flank the stage.

Also included in the rig are seven COLORdash Batten-Quad 12 uplights for the upstage wall washes and ten Rogue R2X Wash units, eight of which are flown over the stage in a grid, while two are hung on the front bar. A Net-x II node is also used at the church to control inputs.

“The church had an eye toward the future when they talked to us about plans for the lighting system,” said David McCauley, Principal of the CSD Group. “They understand how important broadcasts and streaming have become, so they wanted to get more into color on stage here than they are at their two other campuses.

“They also appreciated how important it was that the colors created by their lighting system show up well on camera,” continued McCauley. “Our goal was to provide the most broadcast-friendly looks possible with a system that is versatile, yet simple and impactful.”

In the early phases of using the new lighting system, the stage lighting and key lighting have met the church’s high expectations, while the specials created with the moving features have even exceeded them.

“Everyone loves the versatility of the Rogue R2X Washes,” said McCauley. “They’ve been genuinely surprised at some of the looks they can achieve with such a small rig, and are already thinking about upgrades to the older campuses as everyone see how good this little rig can look, even with the large windows on each side of the room open!”

Completing a project in the midst of a pandemic not only required courage and faith on the part of the church itself, but also teamwork and cooperation among all those involved in this effort.

“None of us could have planned for COVID-19,” said McCauley. “The team at the church, as well as the construction team of architects and builders really came together and kept the project moving safely forward. As with most projects there is give and take – and as always budget makes you rethink everything to make ensure that you can achieve the overall vision in a practical way.”

Pulling all the components of the project together under these circumstances was, in the words of McCauley, “an interesting dance.” In the end though, the dance was completed, and when the music stopped, Grace Bible was left with a beautiful campus that will continue to serve worshippers long after this pandemic has become a distant memory.