WASHINGTON, DC – The U.S. capital is one of the world’s most popular tourist destinations. Yet ironically, the U.S. Travel Association’s annual IPW convention never took place in Washington until this summer, when the group held its first ever convention in the city. Making a positive impression on a select group of the convention’s 6,000 guests from 70 different countries was a lavish VIP dinner held at the majestic Washington National Cathedral. Accenting the beauty of the towering Neo-Gothic limestone structure during this event was an enchanting and endlessly fascinating lighting design by Elizabeth A. Coco that featured 160 CHAUVET Professional and CHAUVET DJ fixtures supplied by Atmosphere, Inc. of Silver Spring, MD.

Coco, a USA 829 union designer, relied on multi-colored uplighting to draw attention to some of the historic building’s captivating architectural features, such as the over 50’ high arched columns that line either side of its nave, which was converted to a dinner and reception area for the event.

Coco positioned 82 WELL Fit RGBA battery powered wireless uplight fixtures at the base of these columns from the nave’s inside aisle, and 36 Freedom Par Quad-4s from the outside. By doing this, she created multi-level rows of color that engendered a sense of intimacy in the massive cathedral (the sixth largest in the world), while still dramatizing its impressive size. Lighting the outside face of the columns also allowed her to fill in the dark space in the area outside the main aisle, making the room more inviting. 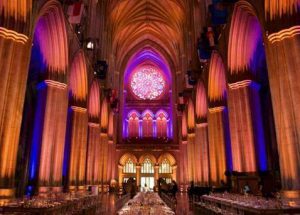 “The columns are awe inspiring,” said Coco. “We wanted to reflect this in the lighting, but at the same time we also wanted the area to be warm and welcoming for the dinner. The output and good colors that we got from the Chauvet fixtures really helped us achieve these dual goals.”

In addition to its massive columns, the Washington National Cathedral features many other distinguishing flourishes, such as 215 stained glass windows, Moses boss stone above the balcony, and a medieval style labyrinth that’s based on the one in the floor of the nave at Chartres Cathedral in France.  Coco’s lighting highlighted these and other scenic elements in the church and its lobby. The latter being illuminated by 18 other Freedom Par Quad-4 units. 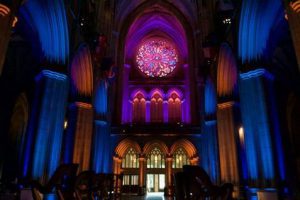 Among the more impressive features at the cathedral that Coco lit is the 26’ diameter stained glass rose window that towers over its north entrance. She brought this window to life with a stunning multi-colored design that featured four moving washes and 24 WELL Fit fixtures. Lighting the columns and supporting arches around the window in soft pastels and then lighting the stained glass with her WELL Fits, she evoked timeless jewel box images that captivated the VIPs at the dinner.

It is said that, like many of its predecessors from the Middle Ages, the Washington National Cathedral was purposely designed with some “flaws” to illustrate that only God is perfect. That may or may not be true about the building’s design, but one thing is certain, for the guests at the U.S. Travel Association VIP dinner, it was a “perfect” evening, thanks in no small part to Coco’s inspired lighting design.