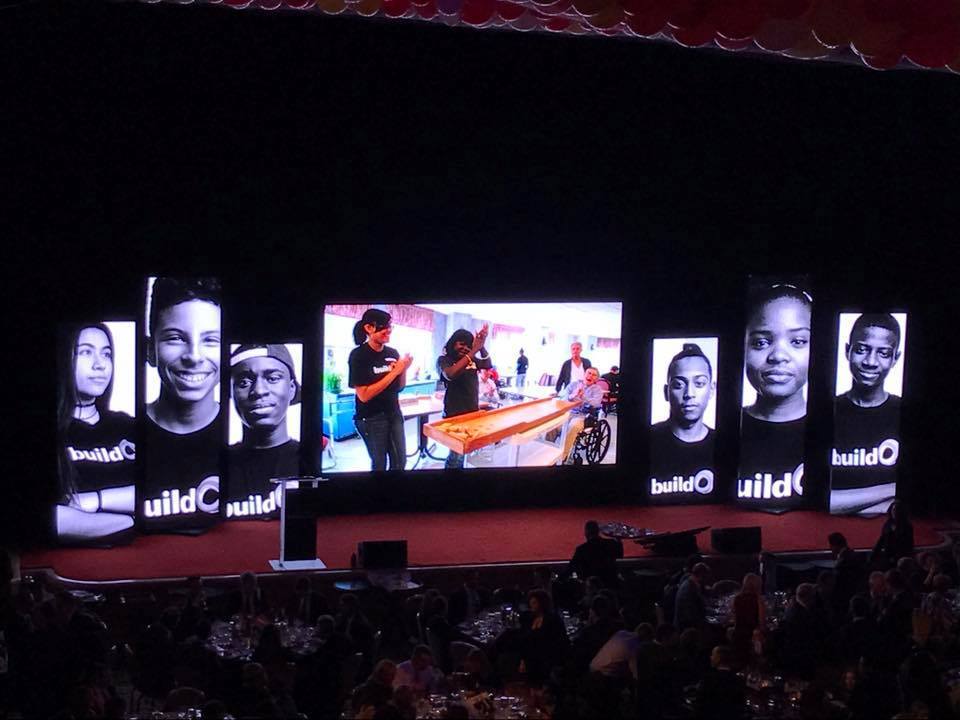 NEW YORK – Soaring four stories high, the elegantly appointed Grand Ballroom at the Waldorf Astoria creates an awe inspiring impression. Its 44’ high ceiling, custom made 16’ diameter chandelier and ornate carved balconies provide a dramatic setting for any event. To stand out against this backdrop, a stage presentation has to be as bold and dramatic as the ballroom itself. Chris Hubbard and his team at Emergency Production provided just such a presentation recently for buildOn, a global charity, with help from 117 PVP S7 panels from CHAUVET Professional.

Hubbard and his team used the LED video panels to build walls across the ballroom’s Broadway-sized stage. The center wall measured 9 panels wide by 5 panels high. It was flanked on either side by vertically oriented walls measuring 2 panels by 5 panels, 2 panels by 6 panels and 2 panels by 7 panels.  There were also projection screens on both sides of the stage. All of the walls positioned on the stage were ground supported using truss and steel base plates. 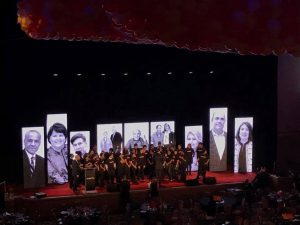 “Spreading the walls out filled space and helped the stage stand out against its very powerful surroundings,” said Hubbard. “The panels were clearly bright enough to fill the room. By making the vertical walls different sizes we created visual variation, which also made the stage look larger and more complete.”

The vertically oriented panels that flanked the center wall displayed photos, imagery and branding for the event, which celebrated the 25th anniversary of buildOn, an organization founded by a former General Electric executive to break the cycle of poverty among disadvantaged youth through education. Images of the evening’s speakers, as well as current and recent projects undertaken by buildOn, were displayed on the central video wall along with a video roll recounting the 25-year history of the organization.

“Content for the outside walls was built 1:1 matching the exact pixel count of the surfaces (768 x 448),” said Hubbard. “The center wall was all 1920×1080 and scaled using the LED Studio software interface. Our Barco Encore drove four destinations with a lot of input sources and backups. The clarity and viewing angle of the PVP S7 panels made the images easy to see from anywhere in the ballroom.” 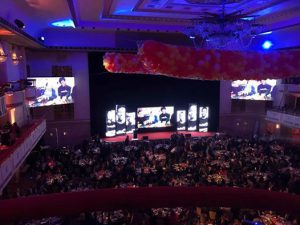 To the 900 guests attending the buildOn gala, the 25th anniversary event went off without a hitch.  Organizers were happy with the event too, since it raised $3.4 million for the group and helped spur appearances on national media like The Today Show.

However, for the Emergency Production team, the event was not without its challenges.  For example, control was from the second balcony, and 275’ of run with a 4-channel Ethercon had to be snaked to the video walls. This task was made all the more problematic by the tight one-day build time frame the crew had to work under.

“Our schedule was very tight for a custom ground support setup,” said Hubbard. “The Waldorf is one of the most difficult load in venues in New York City. Plus we didn’t even see the custom content we were working with until we arrived on site. But our team of Ross Davison (LED lead), Mario Daniil (graphics) and Brian Coady (playback) did great work. In the end, we created a sense of connectivity between the audience and the stage, even in the big ballroom.”