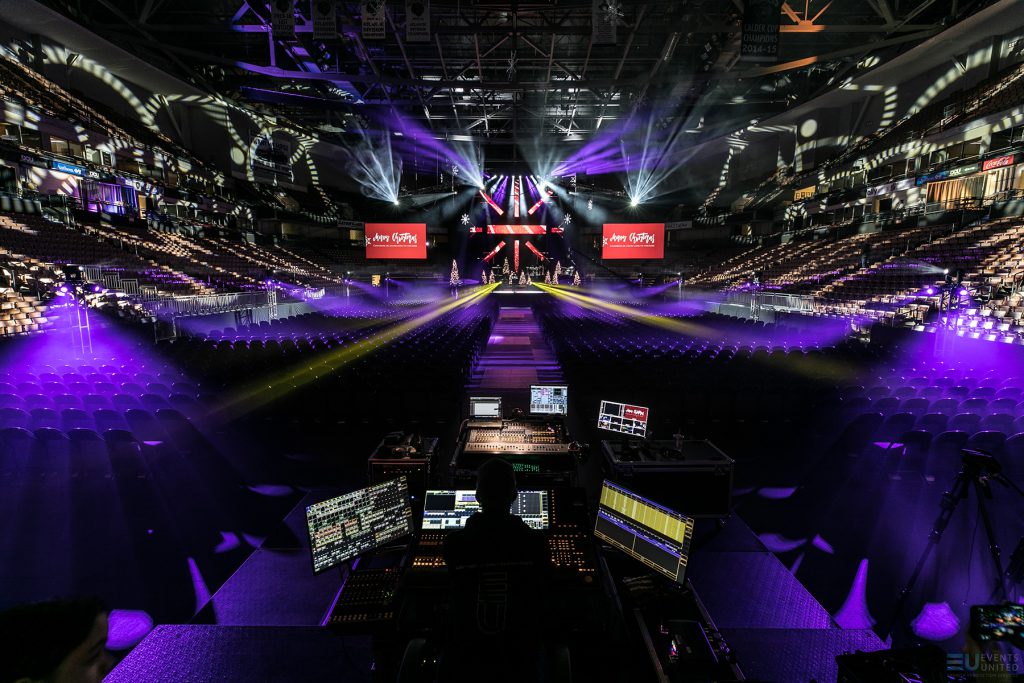 MANCHESTER, NEW HAMPSHIRE – Over 6,000 worshippers turned out for Manchester Christian Church’s Christmas service on Friday, December 22. Despite the large crowd and the spaciousness of the modern Southern New Hampshire University Arena, those who attended the service felt a welcoming sense of engagement. This was largely due to an immersive lighting design created exclusively by the Events United team that featured over 90 fixtures and 92 LED video tiles from CHAUVET Professional.

“The church draws a large number of people for this Christmas service, so it’s necessary to hold it in an arena,” said Tim Messina of Events United, who led the audio, lighting, and video design teams. “Our challenge from a design standpoint was to create looks that conveyed the uplifting spirit of the service, while also creating an inviting sense of warmth throughout the venue.”

Events United has been designing the church’s Christmas and Easter services at the arena for a number of years. They relied on the color and depth created by their fixtures, along with inviting images on their video panels, to make worshippers feel included in the service. Contributing to the engaging atmosphere were the snowflakes that appeared throughout the arena, lit by eight Maverick MK2 Spot and two Rogue R1 Wash fixtures positioned on eight 8’ truss towers.

The stage design itself was dominated by a massive 40’ by 40’ snowflake video wall made of 92 PVP X6IP LED tiles. Lyrics for songs were keyed over the center of the snowflakes, making it easy for worshippers to sing along. At other times, customized moving patterns adorned the video wall.

“We used Resolume Arena 6 for playback and mapping,” said Jon Martell, Events United’s lead video engineer. “The flexibility to create layered compositions and quickly map complex video setups is a huge benefit to us. For all of the songs, we ran a timecode track, which allowed us to sync video playback and lighting cues. The timecode was provided from a computer running Ableton Live. This created a very tight show with amazing visuals.”

The Events United team augmented the visual impact of the stage display by creating crystallized ends of the snowflake wall using 20 ÉPIX Strip Tour units. “The central stage presentation of the snowflake really drew people in and created a sense of awe,” said Messina. “Ryan Lane, our lighting designer, along with Jon Martell, did a masterful job working lights and video together to create a balanced design that connected to everyone in the audience.”

Ensuring that lighting and video worked in harmony was one of the biggest challenges involved in this Christmas project, according to Martell. “We were very meticulous about watching the brightness of the video wall compared to the brightness of the lighting around it,” he said. “Once the rig was up and running, lighting cues were done – and content was tested. We went through a few looks and made sure the brightness from the video wall, projection, and lights all complemented each other. This was done by making sure everything fit within the dynamic range of a Canon 5DIV DSLR camera. We used a camera because the dynamic range is less than our eye and we wanted to make sure that pictures and videos of the service looked great.”

Due to the diligence and hard work of the Events United team, the event was a success and those who attended left filled with the beauty of the Christmas season. 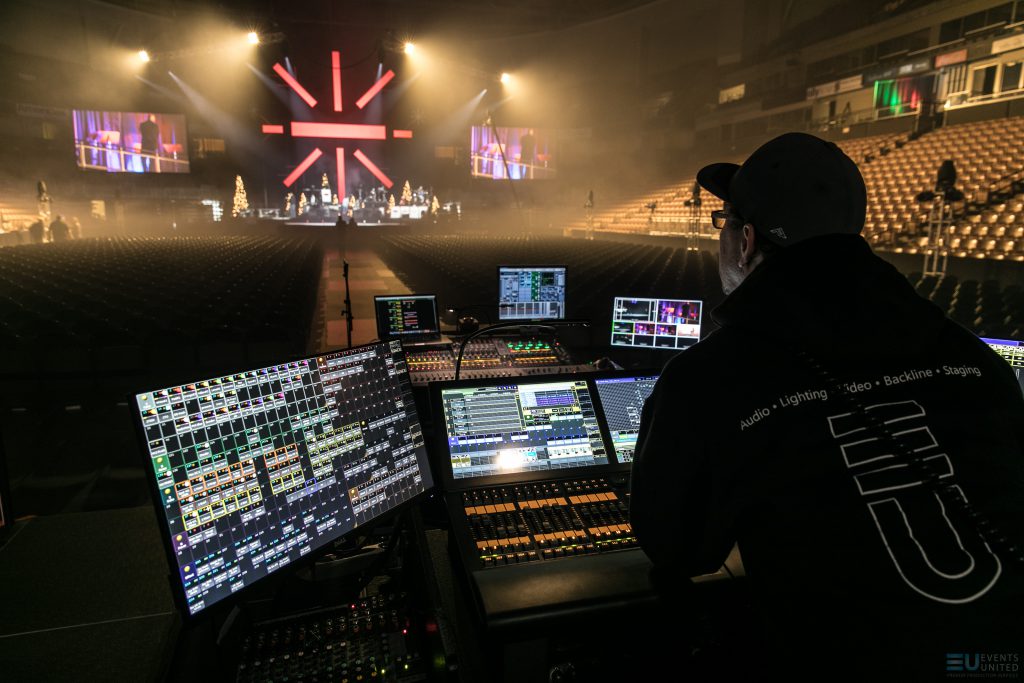