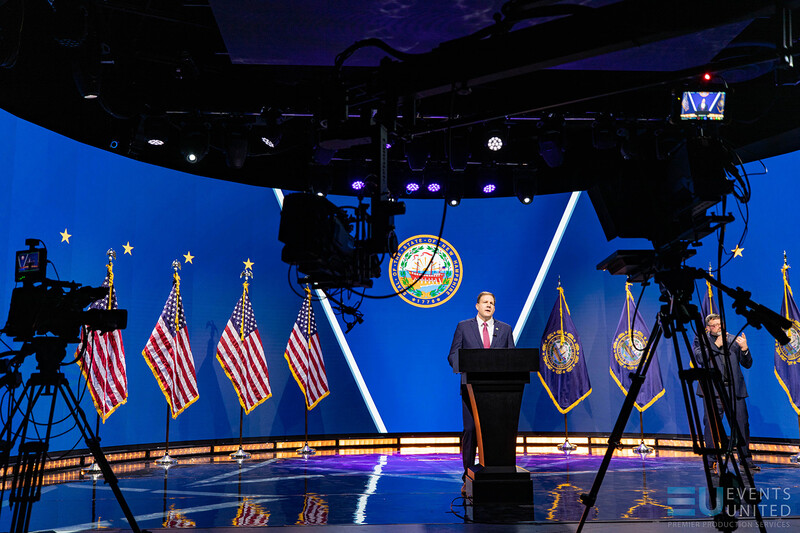 DERRY, NH – How far have livestream studios come since the start of the pandemic? For Tim Messina and his team at Events United, the answer is all the way to the top elected official in their state. This January, New Hampshire Governor Chris Sununu passed up a long list of other possible sites, and delivered his inaugural address at Studio Lab, a world class production facility created by Events United.

The important address marked a milestone for Events United, which formed Studio Lab before the pandemic, but began pouring renewed energy into the space once the lockdown brought live events to a halt. “For us it was a matter of trying to stay busy,” recalled Messina. “But Studio Lab tapped into a strong demand for professional livestream studios and surpassed everyone’s expectations.”

Outfitted with a lighting rig anchored by CHAUVET Professional Maverick fixtures, and featuring a massive 52’ wide by 14’ high curved video wall made with F2 LED panels, the production space has produced a steady flow of livestreams during 2020. Among these events was a Greater Manchester Chamber of Commerce virtual conference attended by Chris Sununu.

During his visit, an impressed governor suggested to his staff that they return to Studio Lab for his inaugural address should he be reelected. Sununu won his contest and sure enough a phone call to book time at Studio Lab followed.

“The governor’s staff arrived the day before the address to review graphics, set design and the overall run of the show,” said Chase Clark, producer of the event. “On the day of the address, we did some run-throughs with the governor and made some final tweaks.” 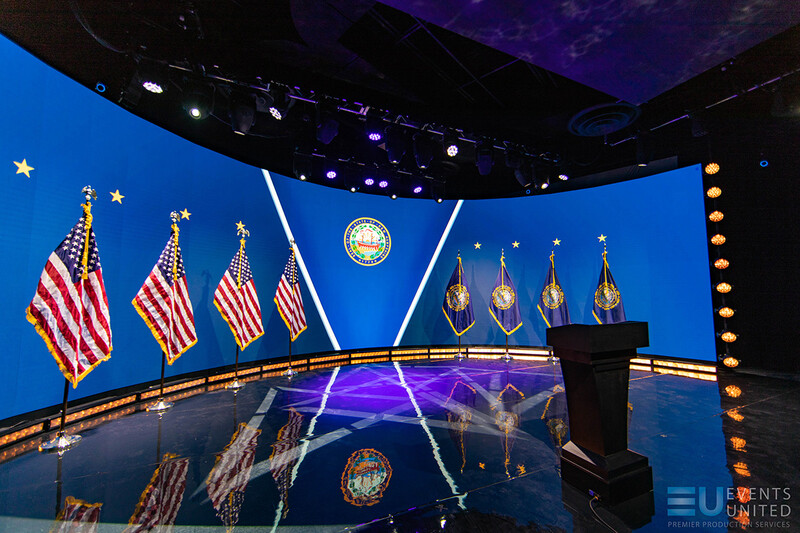 Working together, staff from the governor’s office and Studio Lab, including graphics operators Martin Lyons and Aaron Lauzier, reviewed a variety of background images for the video wall. They eventually selected one that featured the state seal and gold stars against a blue background. “Once we all settled on one background we put all of the assets in separate files,” said Clark. “This way we were able to move around certain assets to make it look best for our main camera shot.”

Events United’s technical director Jon Martell and LD Ryan Lane worked with Clark to determine the optimal key lighting. “It was critical to get key lighting right,” said Clark. “There are high standards for political events and we needed this to look broadcast quality. Once we settled on a podium for the governor, we spent time working on his front light, hair light, and foot light. We mainly used MK2 spots for front light and hair light. We also used some of our MK2 washes for hair light.”

Subtle color lighting from the Maverick fixtures was used to accent the state seal on the video wall. “The graphic was dominated by shades of blue,” said Clark. “We balanced it by complimenting the yellows in the seal.”

The ABC-network affiliate in New Hampshire, WMUR, broadcast the governor’s address from a satellite truck parked at Studio Lab. The studio is designed to handle live broadcasts like these so the team was easily able to provide everything the network needed for the address to go live. The speech was also livestreamed through Studio Lab. Balancing the video and audio for both the TV broadcast and livestreams went smoothly but presented a bit of challenge, according to Clark.

“We had to compromise on a balance between the two,” he said. “There are certain standards we use for audio levels and color balancing on live streams, but there is a slight difference in the way the TV network needed these things. Our team, including camera operators Lauren Thomason, Jeff Garcia, audio mixer Kevin Smith, and studio manager Ben Davis did an excellent job managing the different demands.”

In the end, the governor’s 25-minute speech came off without a hitch against a beautifully balanced background of video and light. As for Events United, the event was a reminder of just how far their livestreaming facility has come. At the beginning of 2020, Studio Lab consisted of various studios that could be rented by other companies. By the end of the year, they had turned it into a fully equipped broadcast and live-streaming destination that has produced over 100 virtual events since the beginning of the pandemic.

As Messina notes, it would have been hard to imagine last year that the governor would be delivering his inaugural address from this studio. But then again, in times like these, the “unexpected” becomes common and new opportunities arise in the most unlikely places.