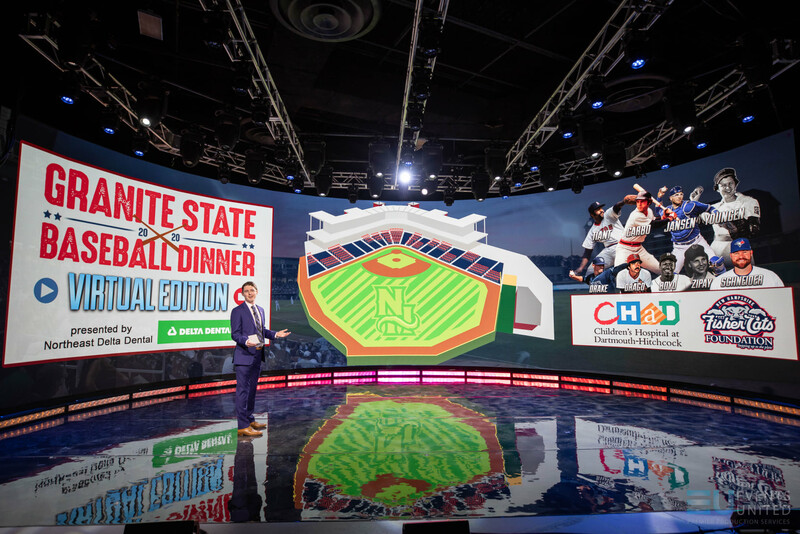 DERRY, NH – Like all minor league baseball teams, The New Hampshire Fisher Cats had no 2020 baseball season, because of the COVID-19 lockdown. Although the crack of the bat and thump of a fastball hitting the catcher’s glove could not be heard at Delta Dental Stadium this summer, the connection that the club, an affiliate of the Toronto Blue Jays, has to fans remains as strong as ever.

This was very evident at the team’s annual Granite State Baseball Dinner. Held virtually this year, with Events United producing the event at Studio Lab, the fundraiser ran over its scheduled time because of the high level of interest from fans throughout New Hampshire. “The Fisher Cats are an institution in this area,” said Tim Messina, owner of Events United. “Since they could not hold their dinner live, we helped them create a new atmosphere of their traditional event in a livestream.”

The key to creating a welcoming mood in the broadcast was a massive 53’ wide by 14‘ tall curved video wall backdrop that was used to display engaging backgrounds, images, and live video conferencing feeds featuring baseball stars like Danny Jansen, starting catcher for the Blue Jays, as well as legends like Boston Red Sox Hall of Famers, Bernie Carbo and Luis Tiant.

“The live video conferencing calls were big part of the show,” said producer Chase Clark. “During the calls, the center third of our video wall displayed the baseball stars interacting live with each other and Tyler Murray, the host for the event. Tyler did a great job balancing all the different feeds and calling audibles when needed. Our Maverick MK2 Spot fixtures, turned down to low intensity, provided us with excellent key lighting on him, while not washing out the video wall images.”

A wide variety of baseball related images, sponsorship call outs, and other graphics were displayed on the two-thirds of the video wall that were not devoted to playing live call-ins. These colorful images did more than create visually pleasing backdrops for livestream viewers, they also were critical in setting the tone for different segments of the broadcast. 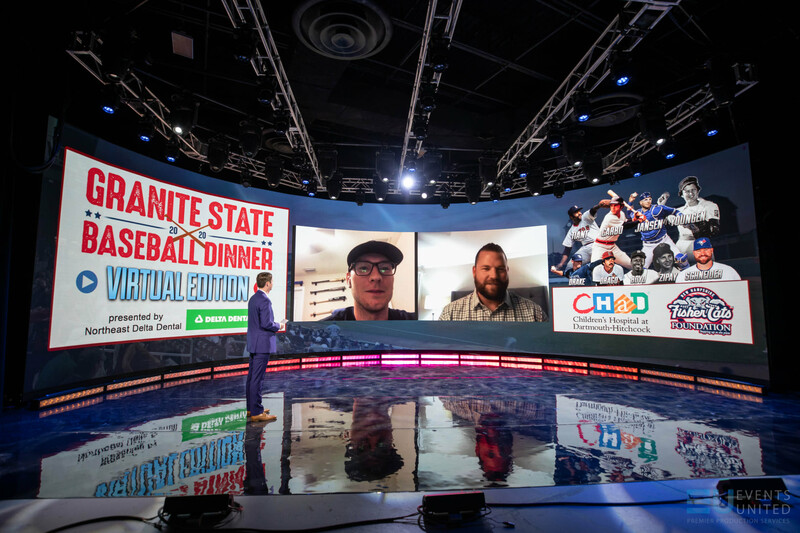 “There were many different parts of this show,” said Clark. “We had segments ranging from a silent auction, to 50/50 raffles, to informational segments on the upcoming season, to entertaining conversations between the stars. Having different looks on the big video background helped us set different tones for each of these segments, while also making it easier to show viewers what each one was about.”

To illustrate his point, Clark cites the program’s “Pack the Park” segment as an example. “This program donated ten dollars to a children’s hospital for every virtual seat purchased”, he said. “So we had tiny pins fill the seats on a giant video graphic of the stadium as donations came in. It was an effective and unique graphic metaphor that generated a lot of excitement.”

While the curved video wall and host were often the key focal point of the livestream, colorizing from Rogue R1 Wash and COLORado Solo Batten fixtures also contributed to setting an engaging atmosphere for the livestream, which utilized four broadcast cameras.

“We spend a good amount of time setting lighting, audio, and camera shots for each event. It’s important to us that each event looks and sounds the best it can and that means that we spend a decent amount of time setting proper camera exposure, color balancing, adding texture, dialing in audio, and working with talent so they are comfortable on camera,” said Clark. “Credit for balancing all these elements goes to our team, which includes our LD Ryan Lane, audio engineer Kevin Smith, LED wall operator Trifon Athnos, graphics operator Joel Pelletier, and teleprompter operator Martin Lyons, as well as our camera operators Lauren Thomason, Jeff Garcia, and Peyton Geisler.”

For Clark, working with his team to use video graphics as a story-telling tool in a live broadcast was a highlight of Granite State Baseball Dinner project. “Personally, I enjoyed the raw emotion between our host Tyler and the remote guests,” he said. “This was all done live and could not have been reproduced any other way. It was a rewarding experience all around.” 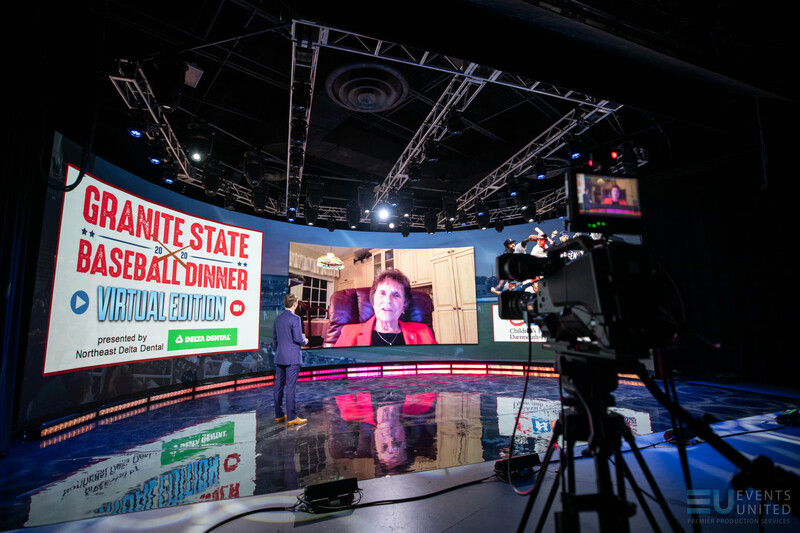