From the moment it begins, with the thunderous guitar riff from his chart-topping hit “Take A Little Ride” reverberating through the house, Jason Aldean’s Ride All Night tour immerses fans in what can best be described as a theatrical experience. As the initial music builds, a larger-than-life silhouetted figure of the star appears out of nowhere on an upstage video surface and walks toward the audience. Just as suddenly, blinding lights illuminate the crowd. Then, as the concert is about to begin in earnest, a diamond-shaped screen rises from the stage deck, making the band fully visible.

This was exactly the type of dramatic scene that Lighting Designers Nick Whitehouse and Dom Smith and Creative Producer Kelly Sticksel of Fireplay envisioned when they signed on to light the ACM Entertainer of the Decade’s 31-date summer tour. “Our idea was to create something a bit more visual and theatrical than what people may have seen in the past,” said Whitehouse. “At the same time, we were firmly committed to highlighting Jason and his band to enhance the audience’s experience.” 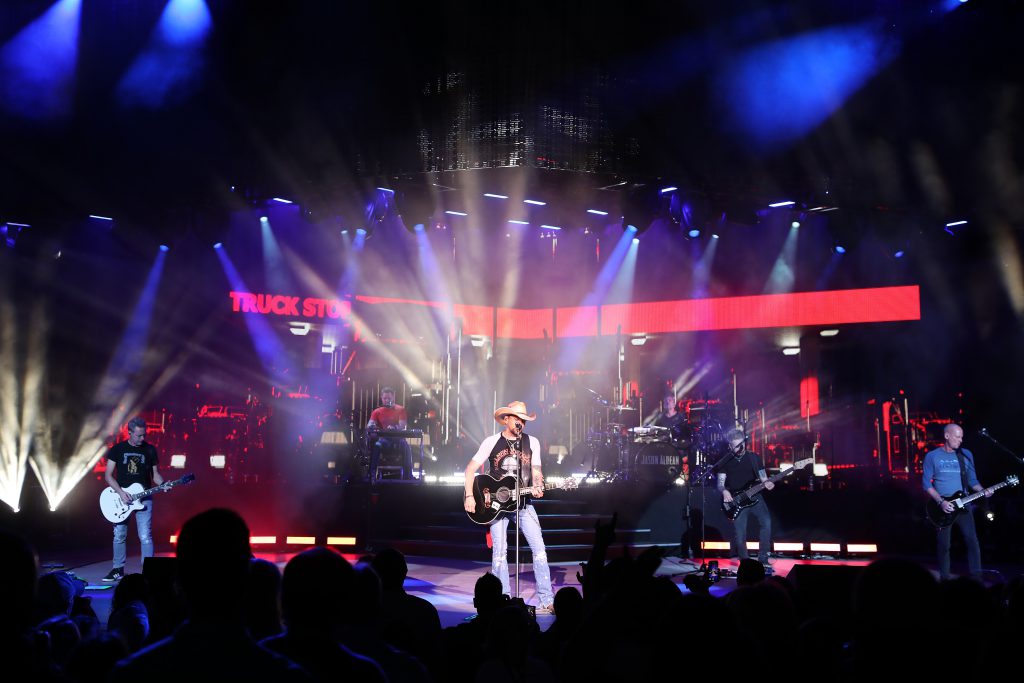 Helping the Fireplay team in this endeavor is a collection of 58 CHAUVET Professional Rogue RH1 Hybrid fixtures, supplied by Bandit Lites. “The large upstage video surfaces were key to creating the immersive environment we were after, but we also wanted movers that we could use in large numbers to complement them,” said Whitehouse. “The Rogues fit the bill quite well. They also give us the opportunity to bring some rock and roll looks to the programming.”

Whitehouse and Smith, along with lighting director Keith Hoagland, positioned 16 of the 330W Rogue RH1 Hybrids on an automated mega pod, 22 on the floor to be used primarily for aerial effect lighting, and 20 in the air, where they contribute to specials that coordinate with the massive video configuration as it displays a dazzling array of custom content created by Luz Studio of Montreal.

“We wanted a very cohesive show that immersed the audience in the performance as much as possible,” said Smith. “To do this, we placed Jason in a series of visual environments with the video forming a meaningful backdrop for each song. Luz Studio did a stunning job creating that content.”

Positioned angularly to create a sense of diminishing perspective and greater depth, the video surface is framed by two moving video borders placed on opposing angles to form an overall diamond shape. Placed within this configuration is the diamond-shaped mega pod. 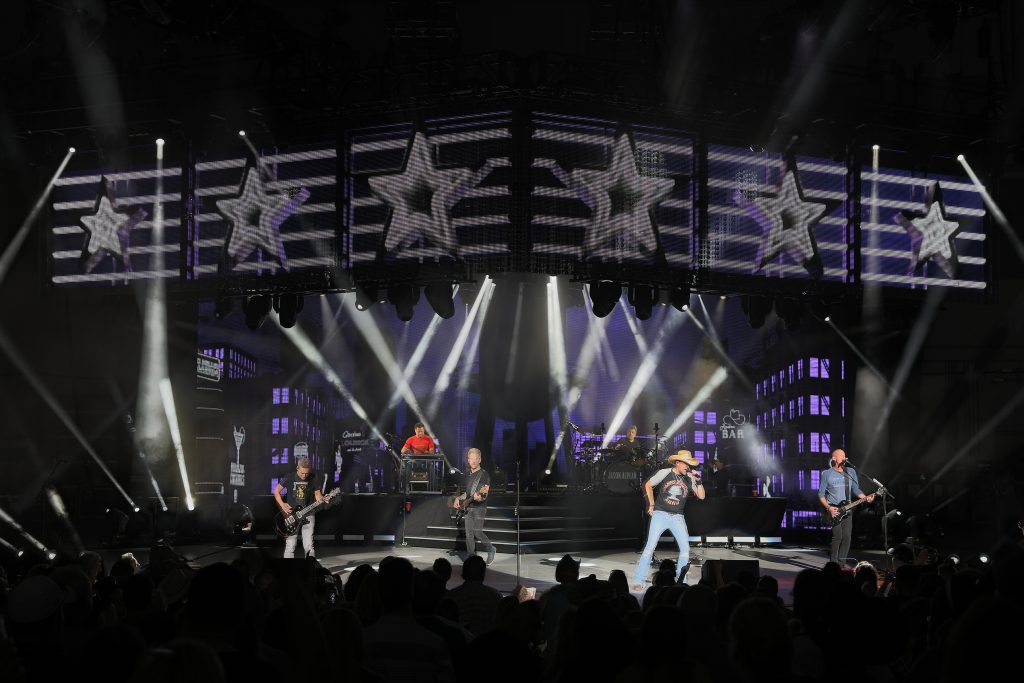 “The rest of the lighting design followed on naturally from the video arrangement,” said Smith. “Something that really stands out in terms of the looks we created was a process developed by Luz that allows us to control some of the lighting elements on screen directly from our console. This has resulted in some truly dynamic content that’s an extension of what is really happening on stage with the lighting.  The sense of depth this creates is incredible.”

Displaying a wide range of realistic and evocative images, ranging from pastoral settings, to music hall marquees, to street scenes and industrial landscapes, the video elements create a richly textured background that amplifies the emotive power of each song. At the same time, rapid pan and tilt movements, crisscrossing patterns and audience lighting from the Rogue RH1 Hybrids and other fixtures are balancing this theatrical effect with a concert vibe.

Working together, the video and lighting make for a complete experience, the kind that fulfills the vision not only of Fireplay, but of Aldean himself. Back on January 14 when he announced the tour, the multi-platinum star exuded enthusiasm for the new production design, saying it was “like Christmas morning to walk out and have new lighting.”  Based on the reaction from fans, it should be feeling like Christmas all summer long on the Ride All Night tour.