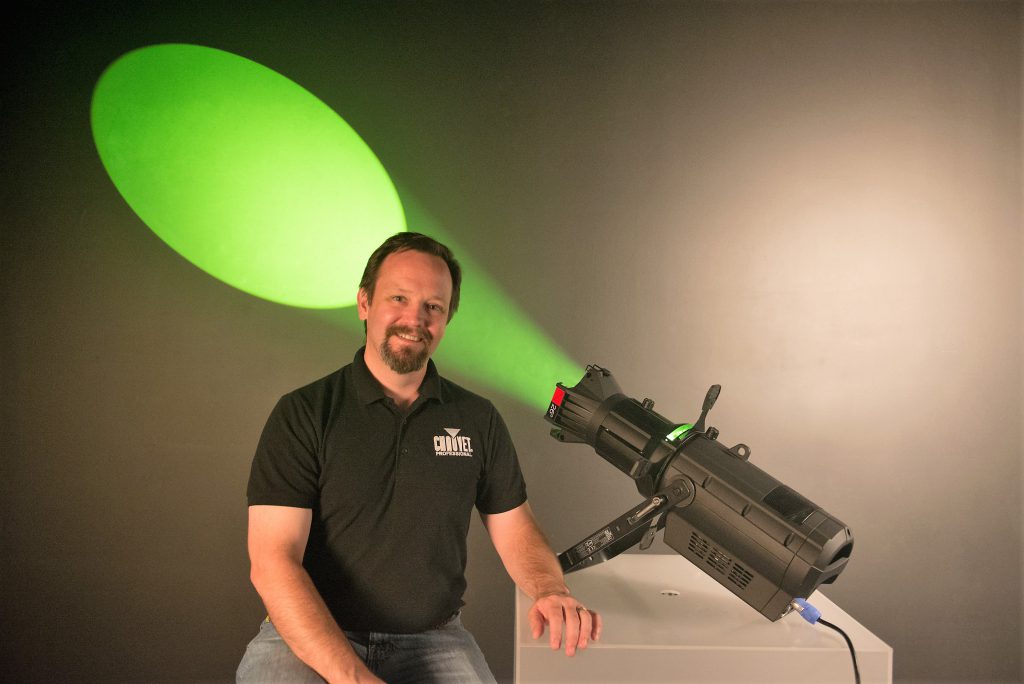 Round stages are on a roll. We’re seeing more of them at concerts and festivals, as well as at pop-up theatrical venues and dinner theatres. While they offer a greater sense of engagement and a unique viewing experience for audiences, these distinctive stages also present a complex set of challenges for lighting designers. CHAUVET Professional Senior Product manager Ford Sellers offers some practical tips on fixture choice and positioning — not to mention design prioritizations — that will keep you from running in circles when you’re called upon to light a round stage.

From an artistic/design standpoint, what are the advantages of a round stage?
“Doing a show on a round stage, be it a concert or dramatic performance, can make it very interesting for the audience. Obviously, by lowering the barrier between the audience and the performance, it can create a much more immersive experience. However, it is also more challenging for everyone involved in a production, requiring a very different artistic approach, a lot more preparation — and often a larger budget.”

Despite the challenges they present, do you think round stages are becoming more widely used?
“I think that many concerts are already finding value this type of presentation. A production in the round allows you to double, or triple, the number of audience members that you can fit into a venue. You are seeing this in many large festival-style presentations from U2 to Electric Daisy Carnival. However, as I just mentioned, the impacts on the production budget are also very significant. It is more expensive to stage a show in-the-round. For a concert tour, you typically need to make the stage into a turntable, so that the band is able to face everyone over the course of the evening. And rigging points are not generally set as heavily in the center of a room as they are toward the end, where a stage is usually set. Which means you may need to have either ground support, or very creative rigging in an indoor venue.” 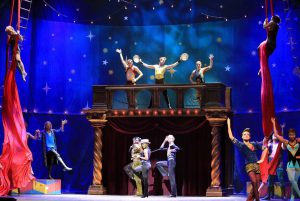 Tall scenic elements like these from “Pippin” designed by Russell Thompson for Prather Touring are not available when designing for round theatre productions.

How about for theatrical productions?
“Theatrically, this depends heavily on the venue. For traditional theatres, an in-the-round production is not very practical. Reconfiguring the seating can be expensive. There are often not the necessary lighting and sound rigging positions available from the existing catwalk and fly systems. This may mean that the entire production is limited to a smaller footprint.

“Where there is a lot of opportunity for theatre in-the-round is in experimental theatre in Black-Box spaces, or in smaller ‘pop-up’ theatres. These are venues without permanent seating. They typically have either a grid for lighting positions, or no permanent lighting positions. They also tend to be the places where directors and designers can take more risks; where they can try new things, and where both the creative team and the audiences are open to new ideas. This is where you see things already presented in-the-round… in smaller productions, in street theatre, in flash-mobs, and the like. I think that in these alternative venues, theatre in-the-round will continue to be an important tool, and a great way to engage audiences in new and unexpected ways.”

From a lighting standpoint, what are the big challenges of working a round stage?
“In a traditional proscenium or thrust presentation, when it comes to design (scenic, and lighting especially), you have limited sightlines. Even when working with a thrust stage, there is an upstage and a downstage, the majority of the scenery is facing one direction, the actors have a direction to focus their energies on, and the LD typically only has to worry about one or two directions for key lighting. There are areas that the audience won’t see, so you don’t have to consider them from a lighting standpoint.

“A noncircular stage setting allows the use of painted drops to establish the background, and it allows lighting to be used in traditional ways: Front light is used as key lighting to see faces. Different colors are used in the side light to highlight shapes; top light to help establish mood and further sculpt the actors and scenery. Cyc lighting can be used to establish space, time of day, etc. Back lighting is used to provide silhouettes. When you move to theatre in-the-round, you throw all of this out.”

So if these things are “thrown out,” how do you compensate, say, in the area of front lighting?
“Firstly, when your talent can be facing any direction and still be looking at the audience, what is front light? Anyone who has lit a theatrical production knows that if the audience cannot see the faces well, they complain that they cannot hear. This is because we actually ‘hear’ quite a bit with our eyes. We can understand tone from facial expressions; we look at people’s faces to interpret not just what they are saying, but the emotions behind the words.

“The challenge you face when lighting in-the-round is how do you choose lighting to accentuate the faces that does not become uniform and flat, when the actors need to be well lit and have consistent connection with the audience from every angle? When dealing with lighting in-the-round, I tend to think more like a video of film designer, and use key light and fill. The key light may be slightly brighter, or a different color, but the fill will also be someone’s front light, so it needs to be bright enough to clearly see the faces.

“Really, when you think about it, you’re now only dealing with front, key and fill, depending on where the performer is standing, along with some top light for isolation and highlighting. When designing for this kind of stage, you have to take into account that the side and back light angles for some members of the audience are going to be the front light for other people. Plus, the key light angle in one scene may be a fill light angle in the next scene. So it’s very important to have color changing fixtures, since this will help reduce the number of redundant fixtures. This can be a life/time/budget saver in these types of productions.

“From a design perspective, this is a significant challenge, particularly for LDs who are used to sculpting the performers and the space with different colored lighting from the side and back. So before embarking on a lighting in-the-round project, it’s important to take the time to experiment in the space, or in a visualizer. Doing this will definitely help shorten your cueing time.” 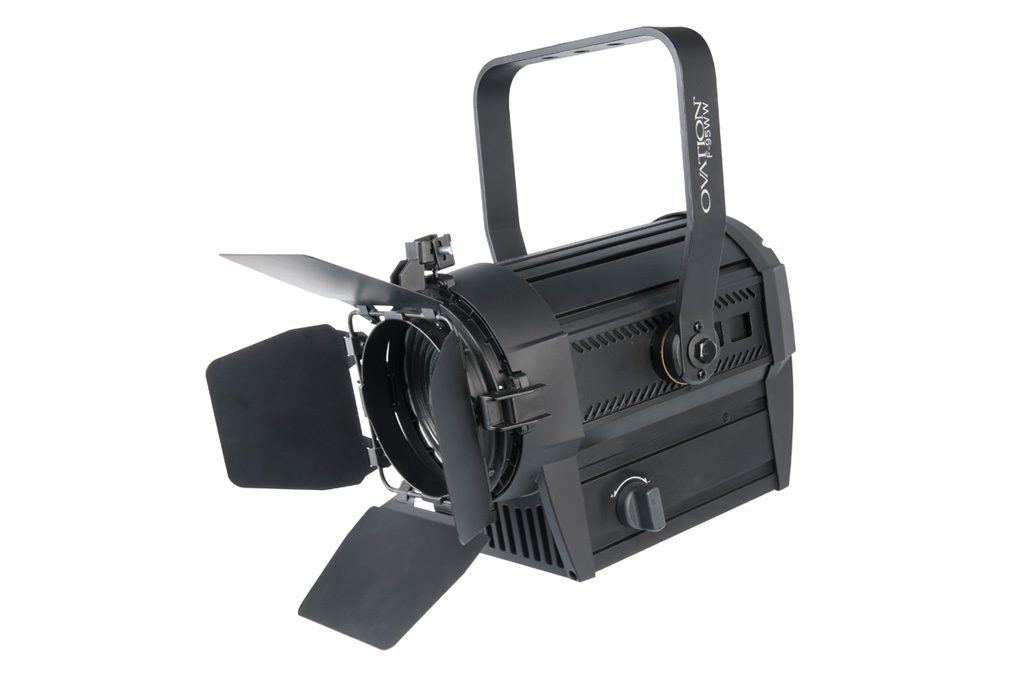 Does having a round stage affect the types of fixtures you use and how you position those fixtures?
“Positioning is very critical in round stage applications. When a production is in-the-round, you have to be concerned with where the light goes after it hits the performers. Audience members who have lights shining in their faces all night are not going to be able to see the show. So hanging and focus angles are critical. Don’t just think about how much light you want on your performers and scenery, but consider where that light goes when it shoots beyond the stage. This typically means lighting from higher angles and into the aisles where possible. This may also mean that you use some untraditional lighting angles, like up-lighting, or even lighting positions in the audience!

“When you’re lighting in-the-round, controlling spill with shutters, top hats, and barn doors becomes critical. Again controlling your beam angles via hanging positions is extremely important, as is the ability to shutter the light out of areas where it is not desired. This makes it especially challenging to light an in-the-round production in a space with a low ceiling. Since you cannot use traditional masking to hide the fixtures, you need the height to get the lights out of the line of sight of the audience.”

Do you have to give up the idea of using se pieces when you work a circular stage, since someone is always going to be seeing the back of them?
“Not at all. However, the scenery needs to be designed to be seen from every side. Tall walls are not usually employed — although you may see a doorway, and imply a wall with different lighting on 2 sides of a stage. A theatrical production performed in the round will tend to have far fewer scene changes, as it is much more difficult to get scenery on and off stage when there is no ‘backstage-area’ for scenic elements to be staged in. For a concert, this may be less of a concern, but it’s always a topic that needs to be considered very early in any production planning an in-the-round presentation.”

How about gobos; would you use those differently on a round stage?
“Gobo washes in theatre are often used in side and high-side washes, which don’t really exist in in spaces that are staged in-the-round. This means that gobo washes are used slightly differently in these setups. In these setups, gobos are typically layered with the fill light and can be more subtle in shows presented in-the-round. Alternatively, they can be used more heavily in top lighting. This is similar to how gobos are often used in concert applications, where they are used with haze to help imply scenery. Additionally, in concert applications, it is more common to have lights in the set, pointing outward toward the audience and into the rafters. These fixtures are usually spot or beam fixtures, and often have gobos in them.”

What advice would you give designers preparing for a show in-the-round?
“Be creative, and be open to new ideas. Staging a show in-the-round can be an amazing way to create intimacy with the audience, but not every show is suitable for this type of presentation. If you are a part of a show that decides to go this route, think it through and try to research what has worked in other productions that you’ve seen – and have long discussions with the director and the scenic designer to establish realistic expectations.”