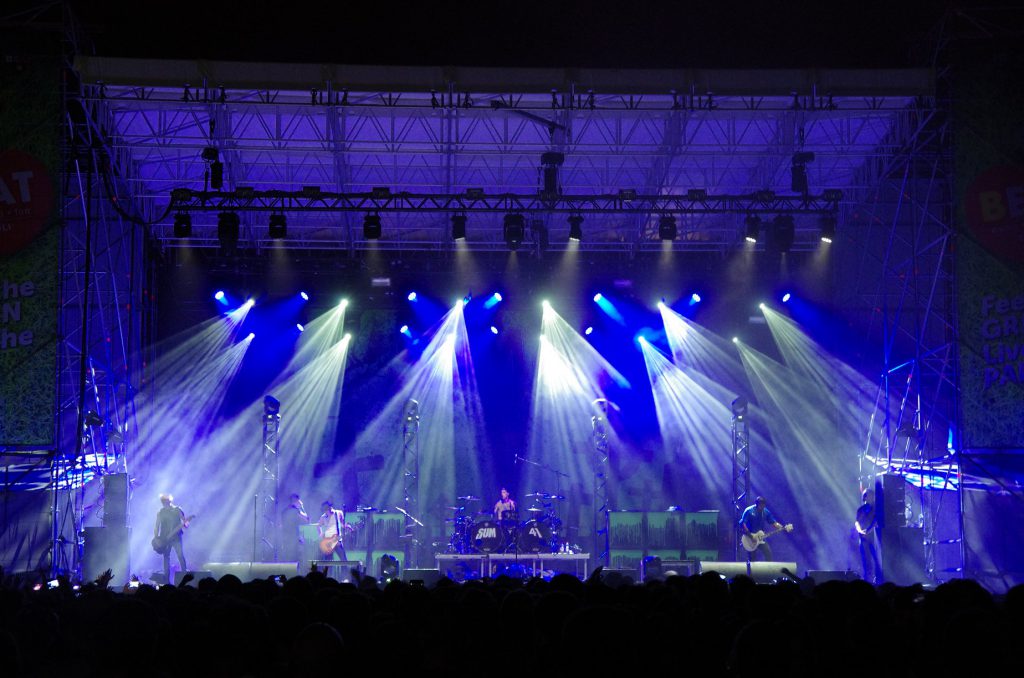 EMPOLI, ITALY – “Life takes interesting turns,” said Andrea Muzzin at the close of the Empoli Beat Festival. In 2002, Muzzin was an avid fan of Sum41. “I played their album Does This Look Infected? over and over again,” said the Video and Lighting Technician at Fumasoli Audio & Light Rental. Fast forward 16 years, and Muzzin finds himself involved in supporting the Juno Award-winning band as they made an encore appearance at this three-day celebration of music and art in a beautiful Tuscan village outside Florence.

Muzzin wasn’t the only one feeling good vibes during the Empoli Beat Festival. Fans packed leafy Serravalle Park outside the city for the festival, which featured acts like Motta, Cosmo and Canova. Supporting Sum41 and the other artists on the main stage was a rig designed by Marco Difebo that was anchored by a collection of CHAUVET Professional Maverick fixtures, supplied and installed by Fumasoli.

A total of 20 Maverick MK2 Wash fixtures and 12 Maverick MK2 Spot units were used on the main stage. “The stage itself was rather small considering the size of the festival and the popularity of the performing artists,” said Muzzin. “However, we wanted all these fixtures to create the kind of big looks we needed. As part of this, we also wanted to be able to light the very large crowd at the festival grounds. Since the Maverick fixtures are compact relative to their output, they were a good choice for us in this situation.”

The Fumasoli team hung six Maverick MK2 Wash fixtures on midstage truss, six on upstage truss and eight on downstage truss. “We used the eight washes on the front truss for downlighting on the performers,” said Muzzin. “The ones on the mid and the back truss were used to colorize the stage, and – for the back ones – also for strobe and gobo effects. The output from these fixtures really made the stage stand out and made it feel bigger than it was in reality.”

Also contributing to the impact of the stage were the rig’s Maverick MK2 Spot fixtures. Throughout most of the festival, they were hung in groups of two on overhead midstage and upstage truss. From these positions, the fixtures were used effectively for backlighting, specials and audience lighting.

“This is a very versatile fixture,” Muzzin said of the Maverick MK2 Spot. To illustrate this point, he notes that four of the 440W moving fixtures were positioned on 3-meter truss stands and used for special effects during Sum41’s performance. “The color of the spots made a great impression on everyone, including the visiting LDs,” said Muzzin. “Everyone appreciated how the colors set the whole mood on stage.”

Color changes, prism effects and large crisp gobos allowed unique looks to be created for every artist on the main stage. “The punk-rock performances called for bold colors and intensity,” said Muzzin. That Fumasoli Audio & Light Rental was able to deliver these big looks made the experience at Empoli Beats especially gratifying. But for Muzzin there was also something else: “This gig was in a fantastic location, with tons of audience, and with one of my favorite bands on stage,” he said. “What could be better?”