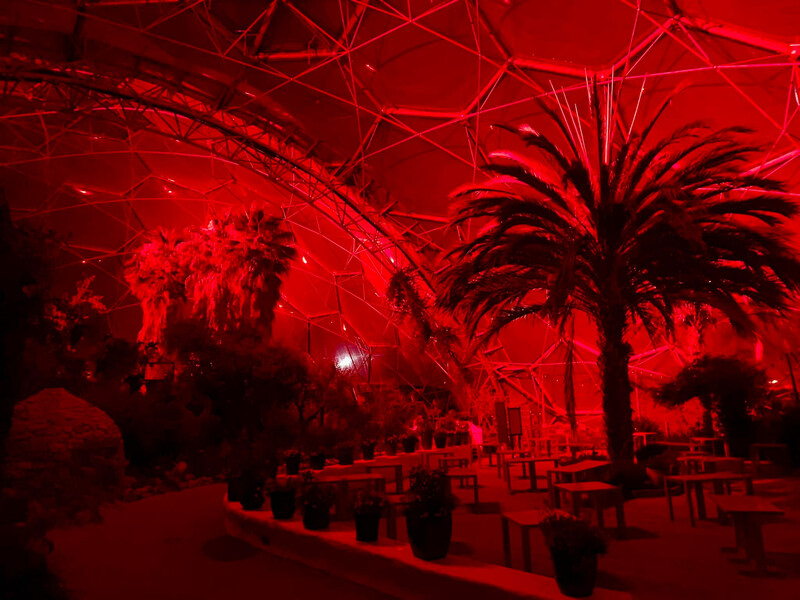 CORNWALL, UK – Like a phoenix rising from the ashes, the Eden Project was born of optimism in 1996, when the visionary Sir Tim Smit announced, what many thought to be an impossible plan: to convert a defunct 160-year old clay pit into a site that would become a world-renowned attraction and education center.

This July, the Eden Project served as a new symbol of hope, when GLX Productions used a collection of CHAUVET Professional COLORado Q40 LED panels to create a brilliant glow throughout its massive Biomes as part of Light It In Red, a national initiative aimed at drawing attention to the severe challenges faced by the entertainment and event industry in the UK and the entire world.

The vivid red hues that shimmered through the hexagonal cladding panels of the Biomes, (like the light that shined on other iconic structures throughout the UK), not only raised awareness of the situation faced by the 25,000 businesses and 500,000 people of the nation’s entertainment and event industry, it also let them know that they are not alone.

“Our industry faces a dire state of affairs,” said Glenn Gridley of GLX Productions. “We know events and venues cannot safely take place for now and we as an industry are in need of support in the interim. Whilst the governments arts sector support is wholeheartedly welcome, there will be people and businesses forgotten. This cannot be allowed to happen.”

“We got involved with Light it in Red after having a few conversations with Steven from Clearsound Productions before it went live,” added Zak Nicholson of GLX. “We spoke about potential dates and looked at which other light ups were taking place He wanted our work to have maximal impact. So, not colliding with anything else was imperative.”

Lighting the Eden Project seemed like a natural choice for GLX Productions, which has worked closely with the venue in the past on a variety of programs, including its 2019 Christmas show.

This summer, with its usual series of events canceled due to COVID-19, the popular facility was available to be part of Light It In Red. “Thanks to the Eden team for making it possible,” said Glenn.

The design team used 36 COLORado Q40 panels at the Eden Project, with 20 of the RGBW fixtures lighting the Rainforest Biome and 16 in the Mediterranean Biome. Suspended from the roof top gantries of the Biomes, the high output fixtures were able to fill the massive domed space with light, creating an evocative red lantern effect.

“It was a long walk up those gantries, the tallest is around 40 meters high,” said Glenn. “But, when we saw how stunning the site looked, we knew it was well worth the effort!”

As it did for the GLX team, and others all who took in the beautiful site of the glowing Biomes, the Eden Project Light It In Red panorama served as welcomed reminder of the creative potential locked inside this industry – a potential waiting, like the phoenix, to rise again, once the pandemic passes.