DE HAAN, BELGIUM – Even in these times of technological wonders, few things stir the imagination like a lighthouse. Since the era of the ancient Egyptians, these towering structures with their glowing tops have guided mariners through uncertain waters. Perhaps that is why they have become a universal symbol of hope and reassurance.

It made sense, therefore, when the city council of De Haan decided to build a “lighthouse” on their famous North Sea beach to serve as a beacon of encouragement for local residents during the coronavirus lockdown. Rising to a height of 13 meters, the lighthouse towers over the community’s 19th century buildings to serve as a comforting reference point for people as they walk past the resort town’s famous, but now shuttered, restaurants and shops.

Adding an inspiring touch to this lighthouse and setting it apart from ordinary symbolic structures is a virtual flame that glows invitingly atop the tower. Attila Dept of Hive created this stunning display with 40 CHAUVET Professional EPIX Strip IP linear fixtures. 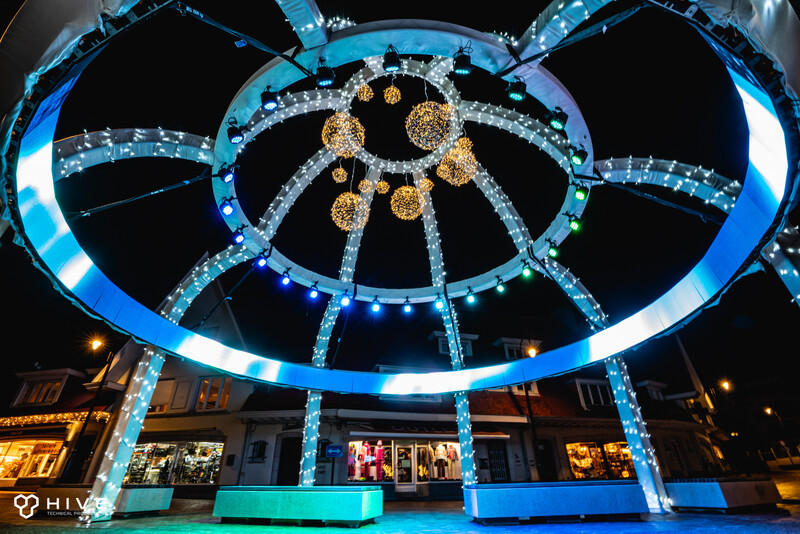 Arranged vertically in a circle around the lighthouse’s upper balcony, the EPIX Strip IPs were pixel mapped to create the image of a live flame as they glowed in oranges and reds. “We wanted to create a warm and cozy feelings for evening walks,” said Dept. “It’s amazing how realistic the glowing tower looks from a far. People see it for miles around.”

Part of the city’s “Winterlicht De Haan,” the lighthouse is one of only three captivating displays created by Dept with help from his team: Jimmy Pauwaert, Lars Vanbillemont and Santino Dejaeger.

On a pedestrian bridge leading up to the lighthouse, he conjured up a magical walkway using 1200 lightbulbs a 1500 Kelvin to create an enchanted path. “These lights are just like mini dots in candle lights,” he said. “The warm light of the dots in combination with red floodlights and flames of the EPIX strips contributed to the perfect atmosphere.”

In the city center, not far from the sea, visitors had another treasure to feast their eyes upon. Dept called this site “Dome Zero,” in reference to it representing the North Pole and northern lights. To help achieve this effect, he arranged 58 CHAUVET Professional LED video panels in a circle in the middle of the dome measuring 8 meters high and 12 meters in diameter.

“When you looked through the dome and saw the night sky past the video panels it was a transformative experience,” said Dept. “The lighting in the dome also worked with the video mapping on the church in Wenduine.”

Walking around this wonderland of light, the people of De Haan were able to forget, if even for a few moments, the uncertainty all around them and move forward with a sense of reassurance. It’s a feeling not unlike the once ancient mariners, would have had when they saw a lighthouse.