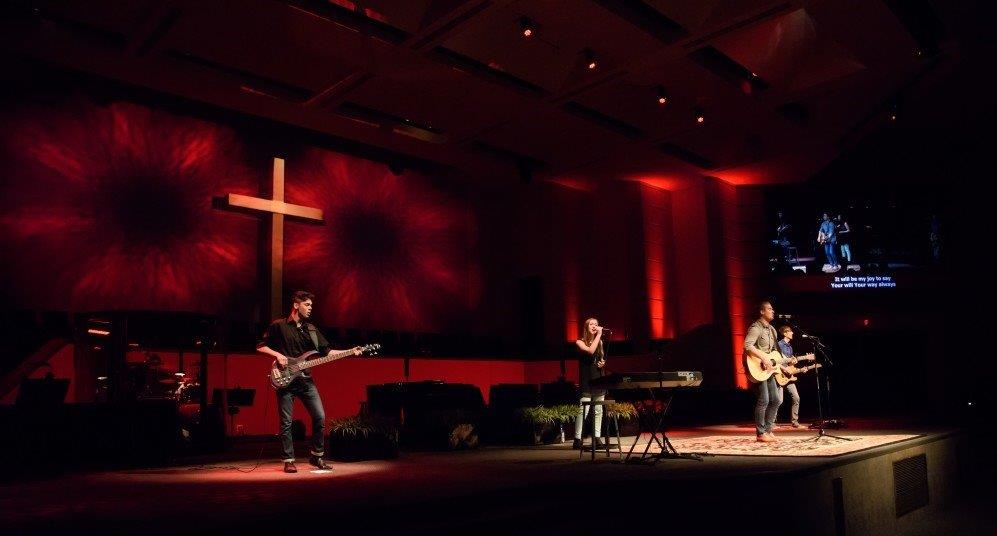 During this time of year many houses of worship assume the added role of becoming live music venues. More than mere recitals by the church’s choir, these Christmas concerts involve platinum recording artists who often come outfitted with their own lighting floor package and designer. An appearance by a star of the Christian music world is exciting for worshippers, but it can create challenges for a church’s tech director.

Bobby Dennis is accustomed to navigating his way through the maze of Christmas concert issues, from ensuring that the rig from a Saturday night performance is torn down in time for services the next morning, to keeping surrounding scenic elements from interfering with lightshows.

A former touring LD, Dennis has been the Tech Director at the Heights Baptist Church outside Dallas for the past 12 years. During this time, he’s worked on concerts that draw audiences of 2,500 to see leading Christian music artists like Dove Award winners Aaron Shust and Point of Grace. He spent some time with us to share insights and offer advice for lighting designers and technical directors who will be collaborating on Christmas concerts this year.

Has the lighting at Christmas concerts changed since you first started lighting them?

“A lot has changed in the 12 years since I entered the HOW market and did my first Christmas concert. My first Christmas show was a traditional church-style musical production. Lighting was conventional fixtures with fixed gels and color scrollers. Our big special effect were the snow machines!

“The following year, our music ministry wanted to take the production to a ‘higher level,’ so they budgeted for four movers for rental. I also had to rent a console capable of controlling those movers. I wasn’t allowed to use haze that first year with our movers, due to the church’s ‘health concerns.’ Fortunately, the following year, haze was allowed for part of the show so the lighting ‘look’ was greatly enhanced with atmospheric beam effects.

“Jumping 12 years forward, we use our own in-house movers, color mixing LEDs, atmospherics and projectors, combined with the occasional rider-specified operator followspots, which we still rent.”

Many churches now have more Christmas scenic elements like garland during this season. Does that affect your work as a designer? 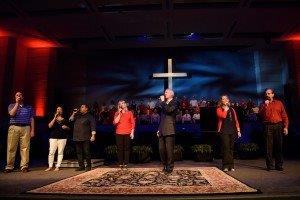 “A big collateral change that isn’t directly related to a Christmas concert, but more the season in general, is that our stage and worship center are always decorated with multiple large Christmas trees and the balcony is draped with garland. Both the trees and garland are lit with literally thousands of typical miniature string lights. The decoration lights are patched into our house dimmer system to provide a level control.

“A company that specifically does commercial Christmas decorating installs the decorations and lights at the church. Last year they made a partial ‘going green’ move by replacing light strings that were not working with much more efficient LED strings. The problem it presented for me -discovered after install completed with no time to make significant changes- the LED strings were not dimmable. So, I had a random mix of both dimmable and non-dimmable strands, thus limiting my control to on/off. Theoretically, the company is returning to traditional dimmable strands this year.” 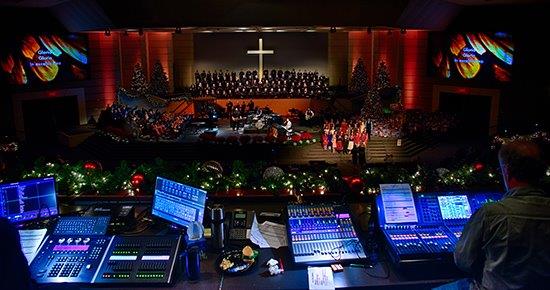 What percentage of artist who perform Christmas concerts at your church have their own LDs and floor packages with them?

“From the 12 Christmas shows since I came onboard, three of the acts (Point of Grace, Andrew Peterson’s Behold the Lamb of God tour, and Steve Green) had their own LDs. POG and Behold the Lamb had floor packages. Steve Green carried four followspots that were used with our house rig – and his LD just called the show. So it varies quite a bit depending on the artist, or the point the artist is at in his or her career.

“However, every visiting artist except two have used our house rig. This is definitely economics-driven since most Christmas tours are a relatively short run – as few as 6-8 total dates. Because they are a limited run, most Christmas tours are fly dates, not bus/truck tours. Those that are bus/trailer dates tend to devote the majority of trailer space for backline and merchandise.”

When do you start communicating with the visiting artist LDs?

“In our specific situation, usually the shows are scheduled/booked mid-summer (hopefully no later than August). At this point, often the only entity involved is the booking agent and/or management. Except for the larger scale productions like POG & AP tours, frequently the specifics, e.g. PM, LD, etc. are not locked in (or at least not made available to the buyer) until later. I begin pressing for names/numbers/emails no later than first of October if the information hasn’t already been provided. I initiate first contact a soon as information is received. Often the people I’m trying to contact are out on other tours, so one expects some level of delay in the initial communication process. So my advice to anyone involved in an HOW Christmas concert is to start as early as possible.”

Can you give us a sense of how that communication process unfolds?

“I typically contact the tour manager first and get additional tour personnel specifics from that person. In the initial conversation with the tour manager I always discuss/compare notes on any changes that were made to the contract/rider, plus what the booking agent verbally represented and agreed to in the event that information didn’t get passed along.

“We then go over the individual elements of the contract rider specifics and discuss/clarify any foreseeable areas of concern. I try to narrow each contract specification down to real world terms. Then I send the tour manager and LD, if applicable, stage, venue and load-in drawings, photos, house audio and lighting system details. I obtain approximate day-of-the-concert arrival time and day’s schedule in terms of load-in, and sound check. Fortunately for my particular situation, the church’s music ministry staff coordinate show elements like in-town transportation and merchandise tables, so I just cover the technical elements of sound, video and lighting.”

How do you achieve a balance between working with the visiting LD’s floor package and not disturbing your house rig, which in all likelihood will have to be used for services in a day or two?

“Our Christmas shows are typically scheduled on the first or second Saturday evening in December, so the weekly service is always the following morning. Contractually, we address house rig change limitations up front. Typically the booking agent will say ‘no problem,’ so this is the main reason why I always spend time going over potential limitations with the tour manager. In an effort to anticipate any potential issues, I have setup zoned coverage in multiple areas of the stage. This information is provided up front to tour manager and LD via drawings and details.”

Do you and your staff help the visiting artist’s people with rigging and set up?

“I am always available to help in any way needed, but since our music ministry coordinates the load-in process, I typically work directly with the tour audio, lighting & video personnel in interfacing their tech with the house.”

What is the biggest challenge with hosting a visiting Christmas concert team?

“Really, they are the same challenges that you find at any concert or special event. You have to balance the varying needs of the organization and those of the tour, maximizing overall positive results.”