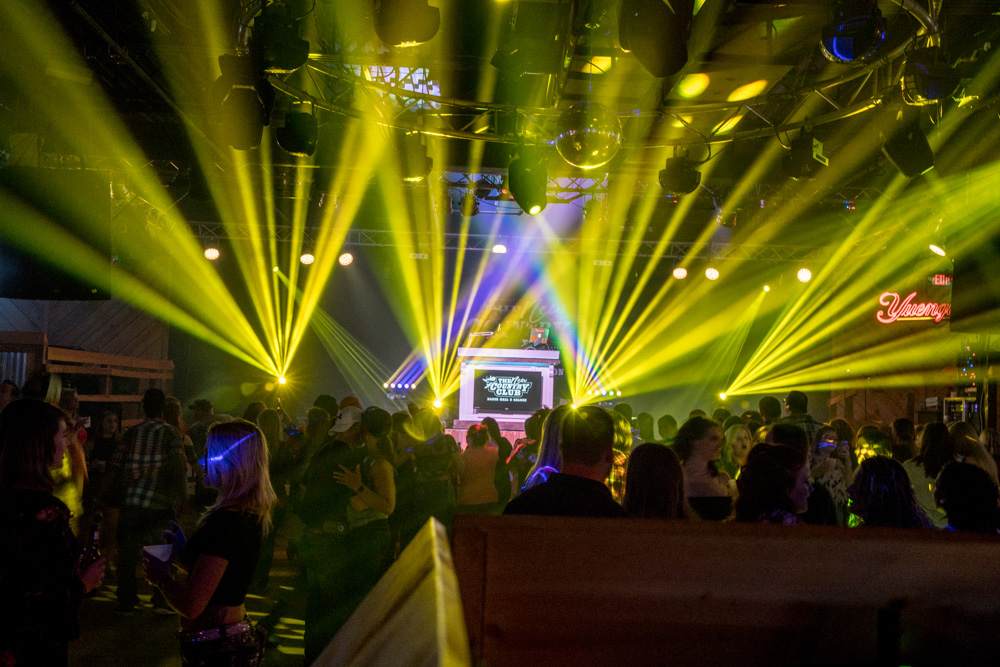 AUGUSTA, GA – Stars from all musical genres came to headline shows and after parties during the famous Masters Golf Tournament this month. Among this stellar group is rapper and film star Nelly. The double Grammy winner, who has sold 21 million records in his career, got a jump on the festivities this year, when he came to Augusta in early March to perform a Masters warmup concert of sorts at the city’s popular Country Club live music venue.

With an artist of Nelly’s stature visiting his mid-sized venue, house LD John Berret wanted to go all out to create some special looks on stage. He did just that, with help from a collection of ground stacked CHAUVET Professional Rogue fixtures, supplied by Quest Sound & Productions LLC.

“Normally, we keep a lot of intense lighting on the dance floor, but with Nelly we wanted to pull everyone’s attention to the center of the stage,” said Berret. “The best way to do this, given the space and budget we had to work with, was to surround him with bright and colorful deck mounted lights. The Rogues fit this bill perfectly.”

Berret positioned two Rogue R1 Beam fixtures and one Rogue R1 FX-B on either side of the DJ booth. Drawing on the independently controlled prisms of the Rogue R1 units, he split their beams. Coupling this effect with the five independently controlled heads on his Rogue R1 FX-B fixtures, he was able to create a lattice work of beams over the stage, creating a compelling light field around the mega-star rapper as he performed.

“It looked like we had a lot more beams out there, given the number of fixtures on the deck,” said Berret. “I was splitting my R1 Beams into five different beams. At times, the FX-Bs I had looked like they were ten different moving fixtures, instead of two. So, it was like we had 30 beams, but in reality, we only had six fixtures. We created what I call a real Rogue look.”

The Rogue R1 FX-B fixtures were positioned between the two Rogue R1 Beam units and set a bit further upstage. Berret often used them to create a tight triangle of light over Nelly. Meanwhile, the light from the R1 Beam units was either directed up over the audience or in crossing patterns over the stage. Adding depth and texture to Berret’s design was light focused on center stage from the house rig’s Q-Spot 460 LED fixtures, flown on upstage truss.

As Nelly’s performance swung through its different moods, with its powerful hooks and double-dutch chants, Berret changed the color and direction of his lights, along with the speed of his pan/tilt movements. “The responsiveness of the Rogues and their color capabilities are great for changing the environment on stage and in a room,” he said. “Nelly is one of the top rappers in history and he is a master at changing things up during a show.”

Berret’s light show did more than keep pace with these changes; it also put a brilliant, bright and colorful exclamation point on a night when the fourth best-selling rap artist in history brought down the house at this local Augusta club.