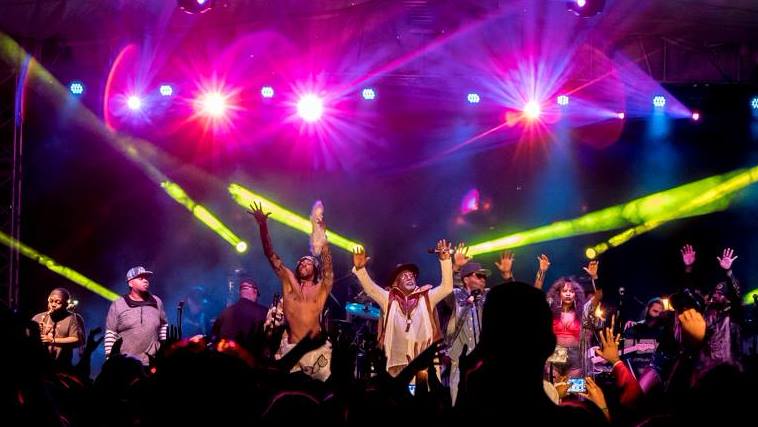 AUGUSTA, GA – James Oglethorpe died in 1785, before terms like “funk” and “psychedelic” entered our lexicon. But this April, the Georgia Colonial hero became part of an immersive colorful experience at a concert by Rock and Roll Hall of Famer and funkadelic pioneer George Clinton, thanks to a sweeping lighting design by John Berret that featured CHAUVET Professional Rogue and COLORado fixtures.

Berret, who designs for Quest Sound & Productions, was hired to create a lightshow for Augusta’s annual outdoor Major Rager Festival, which is held each year in conjunction with the city’s Masters Golf Tournament. Looking to create a total visual experience at the event, he not only lit the stage with fast-moving beams and deeply saturated colors, he also extended the warm immersive looks to the surrounding grounds by lighting trees and the city’s landmark statue of Oglethorpe.

“It was a ton of fun incorporating all the lighting on the grounds into the actual show onstage for a living legend like George Clinton,” said Berret, who ran his stage and grounds lighting on a ChamSys PC Wing “This has obviously been done before, but never here in Augusta, so it got people pumped up as soon as they entered the area. It made them feel like they were about to experience something special, which is one of the key points of lighting design.”

Berret had roughly 3,500’ of DMX cable running throughout the concert area. “I used Chauvet Net-X with Art-Net and three Chauvet Opto Splitters to send signal out,” he said. “Everything was controlled with my ChamSys PC Wing. I had absolutely no lag and no signal issues the whole evening.”

To support the big bold sound of Clinton and his band Parliament-Funkadelic, Berret created intense, bright and fast-moving stage lighting. “I wanted to have a very big bright wall of light on stage, because that’s really what the music and the artist called for,” he said. “We ground stacked six Rogue R1 Beams downstage, plus four more units on 6’ truss and another two on the outside stacked on cases. I also had six Rogue R2 Spots flown on upstage truss spaced evenly across the stage.

“The Rogues allowed me to cover the entire stage with moving light, which reflected the boldness of the music,” continued Berret. “To lend some extra eye candy to the show, I had a Rogue R1 FX-B and Geyser fogger on either side of the downstage deck.”

For added color, Berret relied on a collection of COLORado fixtures that he flew over every section of the stage. He positioned eight COLORado 1-Tri IP fixtures on upstage truss, and 16 of the LED wash lights on downstage truss. In addition to these fixtures, he used two COLORado 1-Tri IP units as truss warmers.

Berret also used the Rogue Beam and Spot fixtures in his rig, along with two COLORado 3p IP units he flew on downstage truss, for audience lighting. “This is a good-time event,” he said. “People want to feel like they’re part of the action. Audience lighting does that, plus it connects the crowd to the artist, so we made it a big part of our show.”

Of course, there was more than audience lighting that immersed the crowd in this show. Berret used 16 COLORado 1-Quad Tours to uplight an equal number of trees in the surrounding grounds, coordinating their colors with the stage lighting. He also placed six COLORado 1-Tri IP units throughout the grounds to light key areas.

Then there were four target=”_blank”>CHAUVET DJ SlimPAR 64 RGB battery- powered fixtures that were used to bathe James Oglethorpe in color. The old war hero never looked so good.