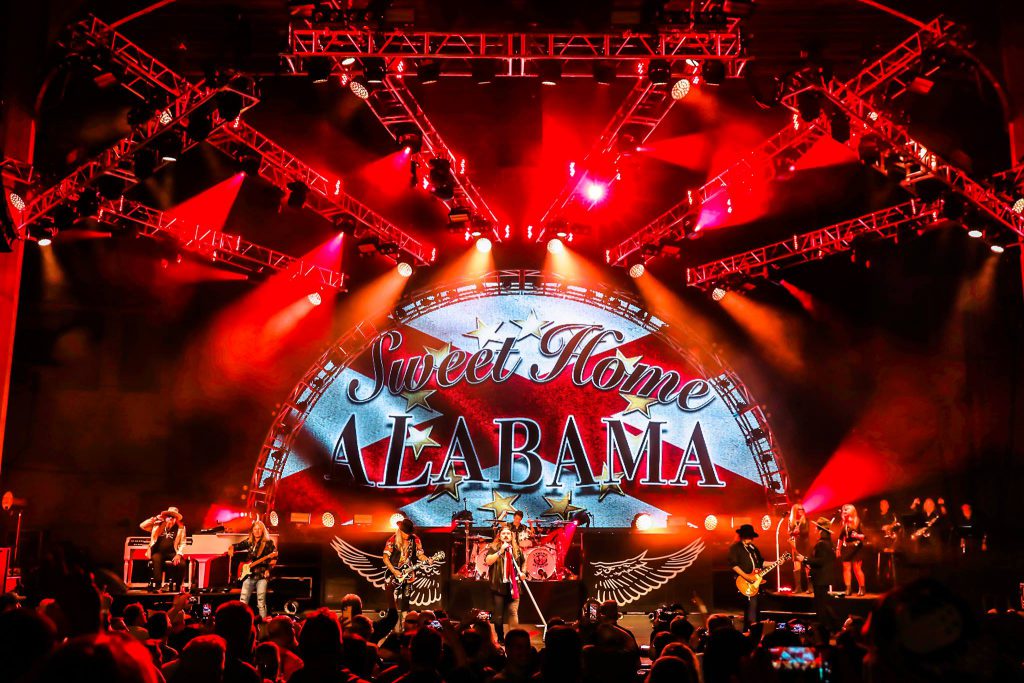 JACKSONVILLE, FL –  Lynyrd Skynyrd will be remembered as “one of the great American rock and roll bands of the 20th century,” declared Rolling Stone in an article about the group’s current farewell tour. Of course, the hard-driving pioneering “Southern Rock” band will also be forever known for its resilience in the face of tragedy, for the way its surviving members reformed the group and continued to influence music after two of its founders lost their lives in a 1977 plane crash at the height of their popularity.

The Rock and Roll Hall of Fame band’s compelling history and profound influence on music were never far from the mind of their lighting designer and director, Jonny “Tosar” Tosarello. Designing for the group’s Last Of The Street Survivors Farewell Tour, which runs from May through December, Tosarello wanted to create a look that was as big and bold as the story of Lynyrd Skynyrd itself. He succeeded in doing just that with help from a collection of 28 CHAUVET Professional Rogue R2 Wash fixtures, supplied by Premier Global Productions.

“When you think of who Lynyrd Skynyrd is and what all the band has done over the years, you want to have a ‘big look,’ especially for their ‘farewell tour,’” said Tosarello.  “We wanted something that stood out and was unique, but was also clean and simple. We have 180’ of silver truss spread out into six fingers that run up to downstage, and another 60’ for the downstage truss. Upstage there is a 40’ half circle truss that surrounds the video wall as an arch. Having rich, vibrant colors play off against the truss, using washes and toners, is definitely part of the look. Glowing set pieces.”

Tosarello, who has been working for Lynyrd Skynyrd since late 2009, relies on the compact Rogue R2 Wash fixtures to help him meet the main goal of, “Always light the band! People are here to ‘see’ Skynyrd play their favorite Skynyrd song(s) so lights are just a bonus, really. Let the band play the music and the lights play the mood.” 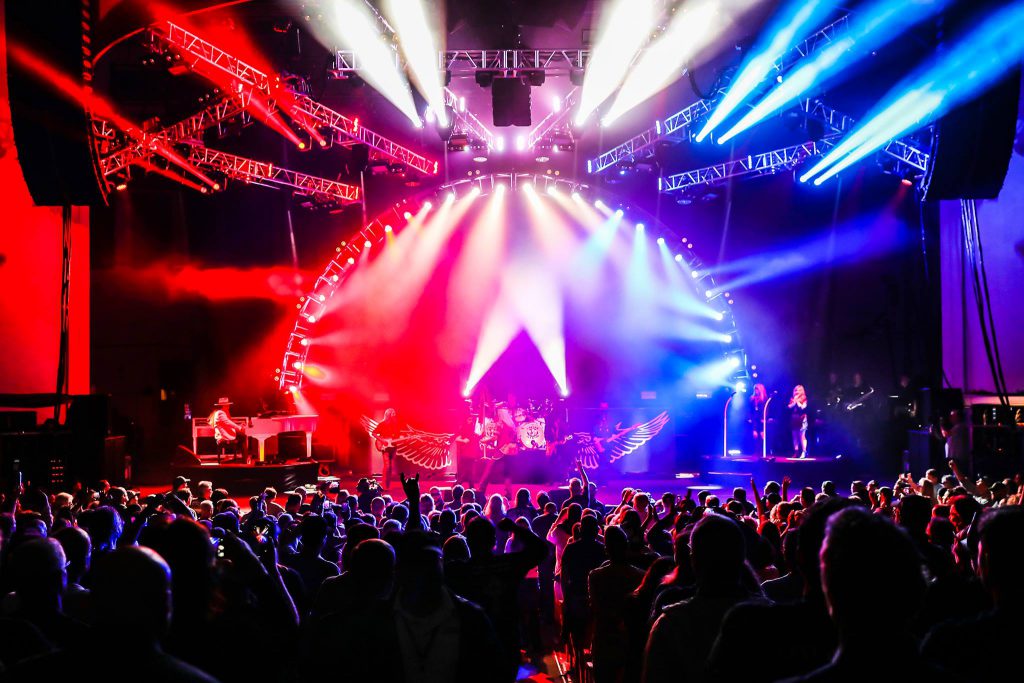 Flying most of the RGBW movers on downstage truss, he has them fill a dual role in his design, using them as front washes and key lights. “I was looking for a small wash light that had the punch and speed most LDs want in an LED wash fixture, but could also work well as a special or key light,” he said. “With their output, color quality and wide zoom range, the Rogues are perfect for both applications, and when you can count on a fixture to cover both roles, it makes life easier for everyone – especially the vendor and crew!”

The high output of the Rogue R2 Washes also allowed them to stand up to the profile, beam and blinder fixtures Tosarello had in his rig. “With Lynyrd Skynyrd you’ve got to have some punch in your rig for those big key moments!” he said. “I never have to worry about the Rogues being bright enough next to the other fixtures. They definitely hold their own!”

Again, Tosarello appreciates the versatility of the Rogue R2 Wash fixtures, as during this “farewell tour” Lynyrd Skynyrd is being joined on stage by various artists, many of whom they had influenced, such as Kid Rock, Jason Aldean and 38 Special. Although guest appearances can often bring different design plans, Tosarello feels he’s put plenty of options in the rig that work for all guest artists and their LDs, especially with the front truss carrying 24 Rogue R2s. “Plenty of front light!” he declares.

“To answer the question on punting, over the years Skynyrd’s show has obviously developed into more of a cued show, but when I began operating for them, I punted everything,” said Tosarello. “I’d learned how to build some awesome pages from my old pal Nook Schoenfeld. One day he said, ‘Hey buddy (a phrase I use often), you should create different pages for different looks.’ So as Skynyrd’s ‘guy’ I quickly realized I never use green in ‘What’s Your Name,’ so I should make a separate page for that song and then so on and so on. Currently each song is still a punt page that runs off a cue stack, which accomplishes two things. One, I can change things up day to day so as not to get bored, and two, if someone needs to cover a show, the band still gets that look per song. I still use the original punt page, so when our guest LD friend needs a quick and easy show, ‘Here ya go buddy – use this.’”

Tosarello also designed his rig to be flexible. “Most of our shows are in ‘A’ market venues, but even still there are those ‘more challenging’ places that could be a bit bigger or wider or whatever, but we know this, so best to be ready!” he said. “Prior to 2007 I’d spent many years as a lighting crew chief and learned it’s really nice when a rig is designed with flexibility so – this one is! I made it a point to insure EVERYTHING will fit into any reasonable size venue despite most limitations!

“The rig consists of six mid-stage ‘fingers’ that spread offstage and rake up and downstage, and a 60’ downstage truss that’s broken into three sections, all of which are easily moved to accommodate any possible venue limitations. Basically, we can move a bunch of stuff around and still maintain ‘the look,’” continued Tosarello. “No matter where we play, Lynyrd Skynyrd has every light, every night!”