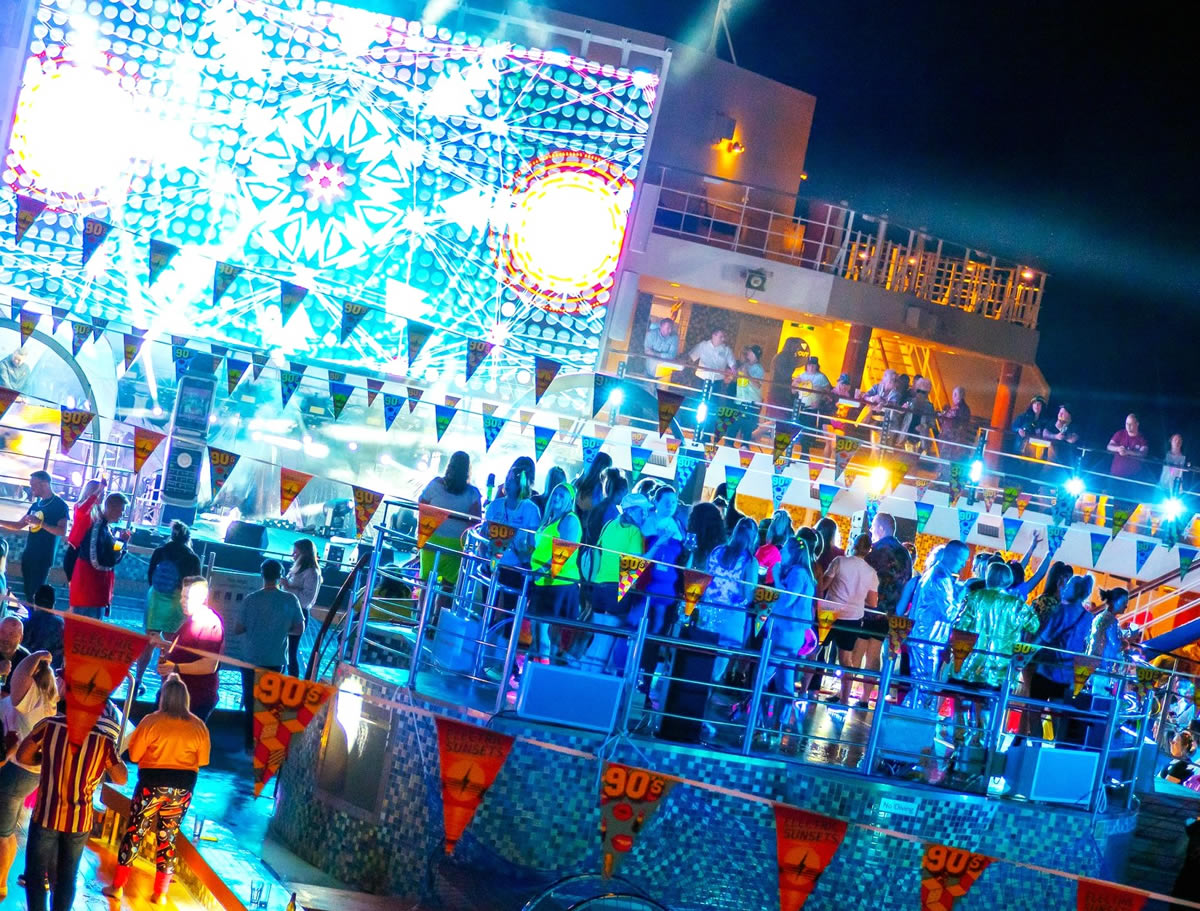 NEWCASTLE, UK – In early September, passengers boarded Marella Explorer for a four-day journey. As it plied the North Sea, the 866-foot vessel wasn’t so much taking those on board to a place, as it was a time on the immersive “Electric Sunsets: Cruise Back to the 90s” cruise, produced by ted (The Entertainment Department).

The decade of Spice Girls and boy bands, grunge and hip-hop came to life on the top deck of Marella Cruises’ well-appointed ship, complete with performances from Top 10 artists of the era like B*Witched and 5ive, scintillating DJ sets, costume contests, and an updated 90s-style lighting design that featured 12 CHAUVET Professional Maverick Storm 1 Wash fixtures supplied by Impact Production Services.

Working for ted, José Lorenzo of José Lorenzo Lighting Design placed eight of the IP65 rated units (two apiece) on four T-truss structures located around the pool deck. The remain four units were hung on back truss behind the main stage. From these positions, the Maverick Storm 1 Washes covered the entire event area with punchy, fast-moving, multi-colored effects. 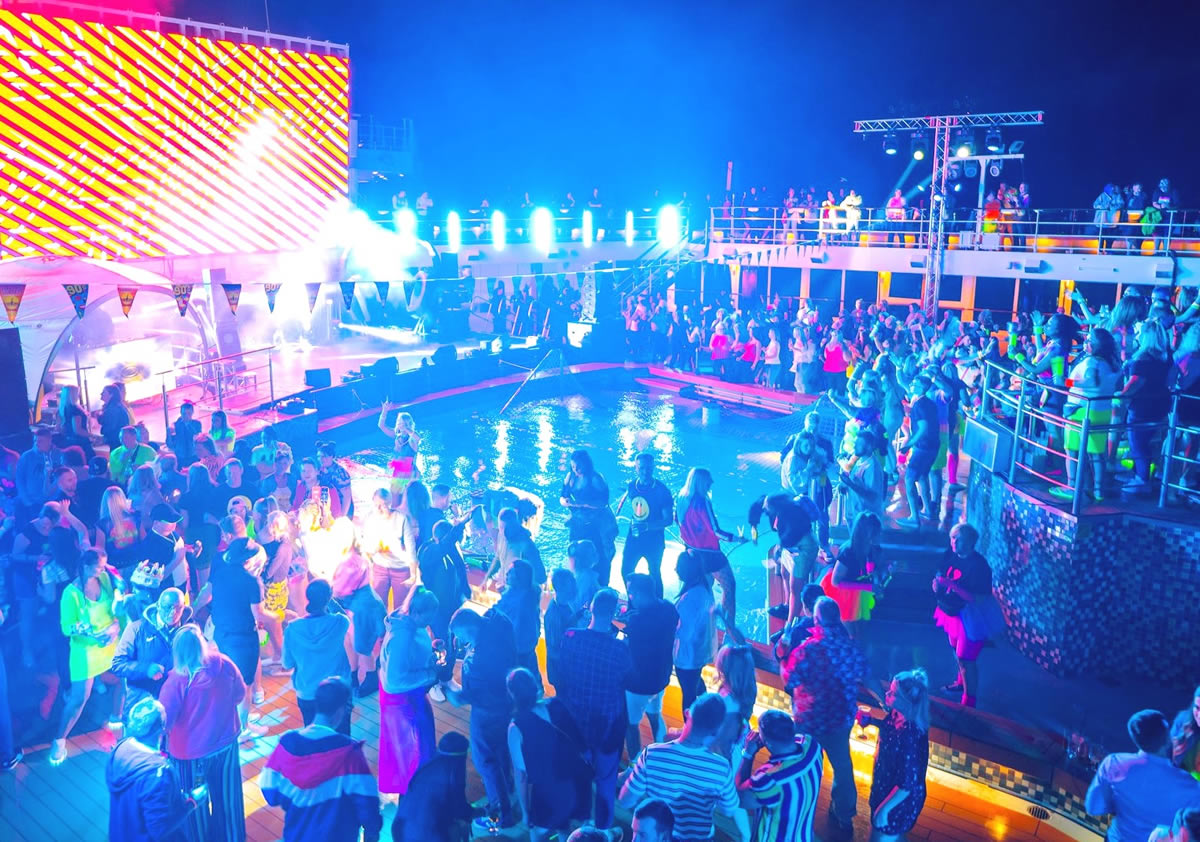 “I was born in the 90s, but was too young to be clubbing,” said Lorenzo. “So, I did a lot of research. I believe that when you talk about partying in the 90s, it brings everyone back to the effects of stroboscopic lights, lasers, moving lights, color-changing lights, and smoke. When I was doing my research, all the videos looked smoky, and all involved the effects I just mentioned. This is what I tried to recreate, but with a modern technology touch. It was a lot of fun, and I’m grateful that Martin Jones, Flavio Diolaiti and Matt Spence from ted gave me the opportunity to do this project.” 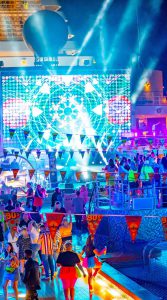 Lorenzo notes that the Storm 1 Wash fixtures made multiple contributions to his 90s club and festival look. “They are fast moving units, which helped to replicate the effect of scans,” he said. “Playing with the LED rings helped us to do nice looking color changes. Also, the beam angles I got from the zoom range gave me the chance to play with very narrow beams to complement the effect of my spots and lasers.”

Given that the event took places outdoors on a ship’s pool deck, Lorenzo relied on aerial washes from the Maverick Storm 1 Wash fixtures to cast a colorful canopy of light over the pool and its surrounding deck. This helped define the party area, creating an immersive sense of space for Marella Cruises’ passengers, and enhancing the stand-out acts provided for the event by ted.

The color rendering capabilities of the RGBW moving washes also aided Lorenzo by providing him with a wide palette of 90s-evocative hues to work with. “Our rig gave us a lot of flexibility,” he said. “One of the headliners, DJ SASH!, needed a super-bright and modern rig that could create the impression of a club lightshow for his set. The Mavericks had no problem making him happy with their output.” 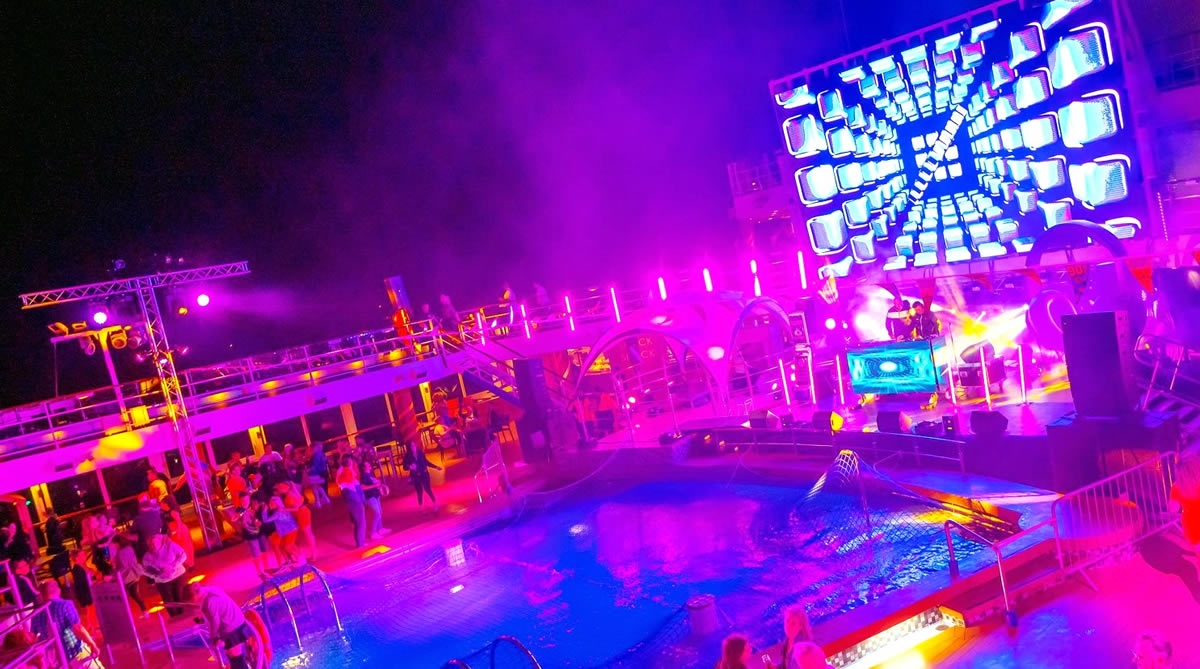 The over-6,000 lumens output of the Maverick Storm 1 Wash also exceeded Lorenzo’s expectations. “Lighting on a cruise ship deck has its challenges, especially given the exposure to the elements,” he said. “So, naturally, the ted AV team and I were attracted by the Maverick’s IP rating, as well as its compact size. But at first, after the techs showed me how bright the big LED wall was, I was concerned about how the washes would stand up to it. Once I had the lights set up and turned on though, I could see in an instant that the Mavericks would have no issue standing out to give us a great show.”

Intense, fast moving, colorful and very flexible… the lightshow that ted and José Lorenzo conjured up for Marella Cruises’ Electric Sunsets: Cruise Back to the 90s was – to borrow a phrase from the era – “rad!”