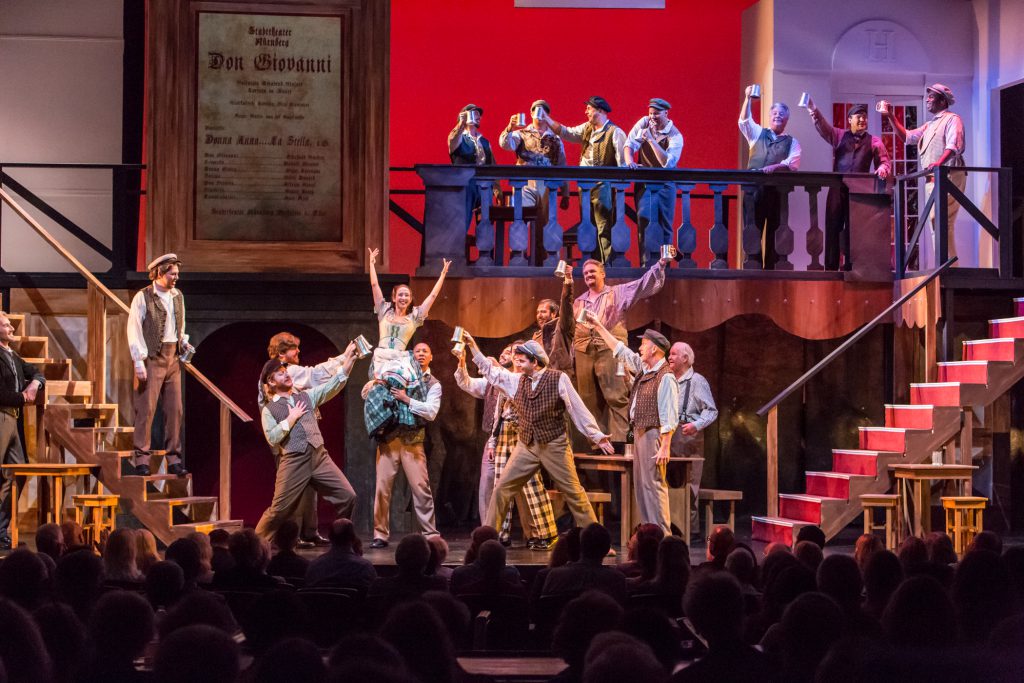 PETERSBURG, FL – Following a poet through three fanciful stories of unrequited love, Tales of Hoffman has held sway over audiences since it debuted in Paris 136 years ago. Its bright, lively music and a clever libretto are only two of the qualities that have earned this fantastical work a prominent spot in opera company repertoires for all these years. With a plot that is far reaching (even by operatic standards) and numerous scene changes – plus a cast of characters that include robots and muses, Tales of Hoffman is about imagination and imagery as well as music.

At St. Petersburg Opera Company’s current production of the Jacques Offenbach classic, lighting designer Keith Arsenault is bringing out the full richness of its imaginative charm, while supporting its musical core, with a balanced and colorful design that features CHAUVET Professional Rogue R2 Wash moving lights supplied by Barbizon. “This is a rewarding production to light,” he said. “There are four different stage settings and intriguing characters. We created some excellent looks to support the show.”

Arsenault’s accomplishment is particularly impressive, given the limitations of the venue. The opera is running at The Palladium, a former church built in 1925. Although this facility provides audiences with great sightlines, it has no fly loft and no wings on its 70’ wide proscenium stage. (Only 48’ was used for Tales of Hoffman.) Plus, every instrument over the stage and FOH position is ONLY accessible via a Genie lift.

“There were challenges involved in lighting an opera like Tales at this venue, but we prevailed thanks to team work and the performance of our lights,” said Arsenault. “For example, the FOH position is placed over the circulation aisle, so that it could be accessible to the Genie. This resulted in an unusually high angle to the stage from the FOH, so obviously any fixture that has remote capabilities is very desirable. The Rogues have been a huge asset to the production. The five Rogue R2 Washes we use worked out great, because in our tight hang they take up very little room and they are not terribly heavy.” 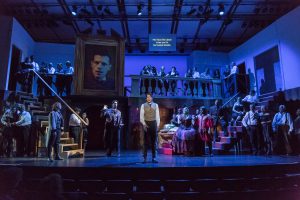 The Palladium also has no orchestra pit. (For Tales of Hoffman, the 38-piece orchestra sits behind the set.) Without an orchestra pit separating them from the stage, the audience is very close to the action at The Palladium. Arsenault compensates for this by directing attention to the performers with “lots and lots of little cues.” Audience proximity to the stage also means that a premium is placed on having quiet fixtures. “The Rogues are quiet enough for us to use in this setting.”

Arsenault positions two of his Rogue R2 Washes at the outermost edge of the first electric, one unit on each end. Another Rogue is positioned at the center of the set on the second electric, while the final two units are on either end of the second electric. From these positions, the Rogues are invaluable in accenting scene changes.

The upstage Rogues are used to wash walls and light the chorus on that upper level; while the downstage fixtures provide color variety on the principal action on stage. About 90 percent of the time, the Rogues are zoomed out to 35 – 40 degrees, but Arsenault also zooms the fixtures in to highlight individual performers.

“Given the limitations of the venue, Tales has a single two-level set designed by Steve Mitchell instead of four different sets,” said Arsenault. “This set gets redressed from act to act throughout the opera. A large framed screen on the upper level displays a photo of Offenbach as the audience enters and at intermission. Simple projections are used to represent each act. Quite frankly the R2s are instrumental in making this distinction from act to act. In the conventional portion of the plot I am limited to one top light wash and two side lighting washes. Much of the side lighting is useless in this production, as the box nature of the set makes it impossible to use the existing positions.”

Matching colors throughout his design was essential to creating a unified look on stage within each act, according to Arsenault. “I was very pleased with the way the Rogues matched the standard Roscolux colors that I used in the conventionals,” he said. “I found that keeping the Rosco palette up on the screen was a quick and easy way to match the Rogues with the conventionals in the rig.”

Creating this unified look on stage required more that just blended colors, there was also the meshing of human talent. “I owe big thanks to Christopher Spatafora who is the hands-on Technical Director and Master Electrician of all things at The Palladium. He makes my life here a wonderfully creative experience by making things work in ways that I am often incapable of,” said Arsenault. “Of course there is also Mark Sforzini, our Executive and Artistic Director; Karl Hesser, the Stage Director; Daryl Gray, Choreographer; Steve Mitchell, our Scenic Designer; Glenn Breed in costumes, and Sondra Worthingham, who did wigs and hair – all contributed.”

Looking back at Tales of Hoffman, Arsenault also has a deeper appreciation of the CHAUVET Professional Rogue R2 Wash units he tried for the first time at this production. “In retrospect, I just can’t imagine doing Tales without them,” he said. “I wish I had them at the 28 other operas I’ve done here too!” 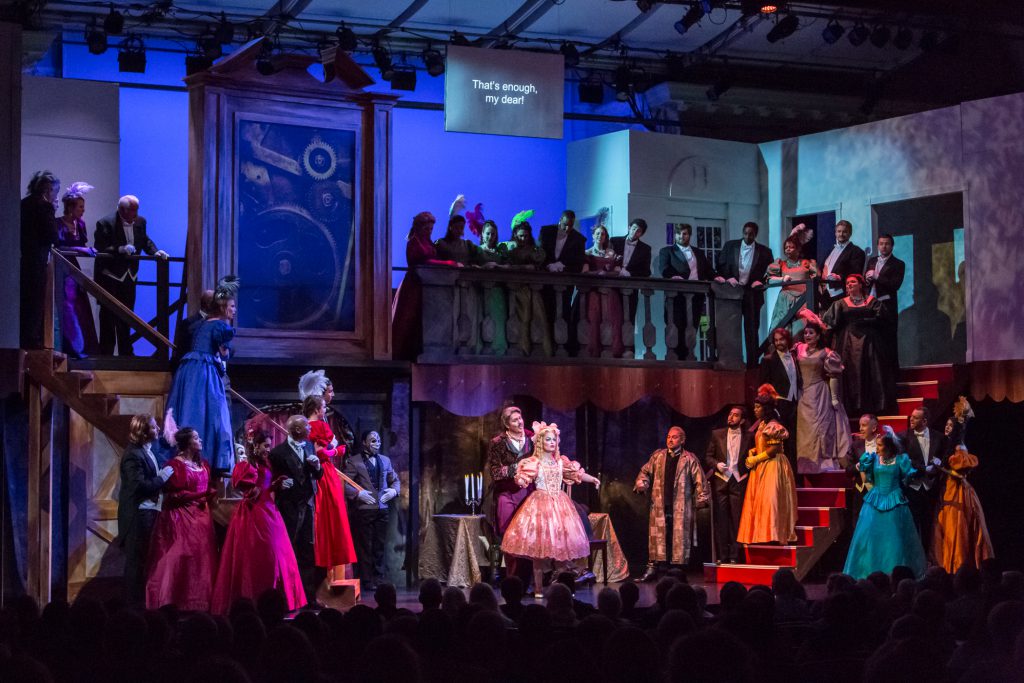 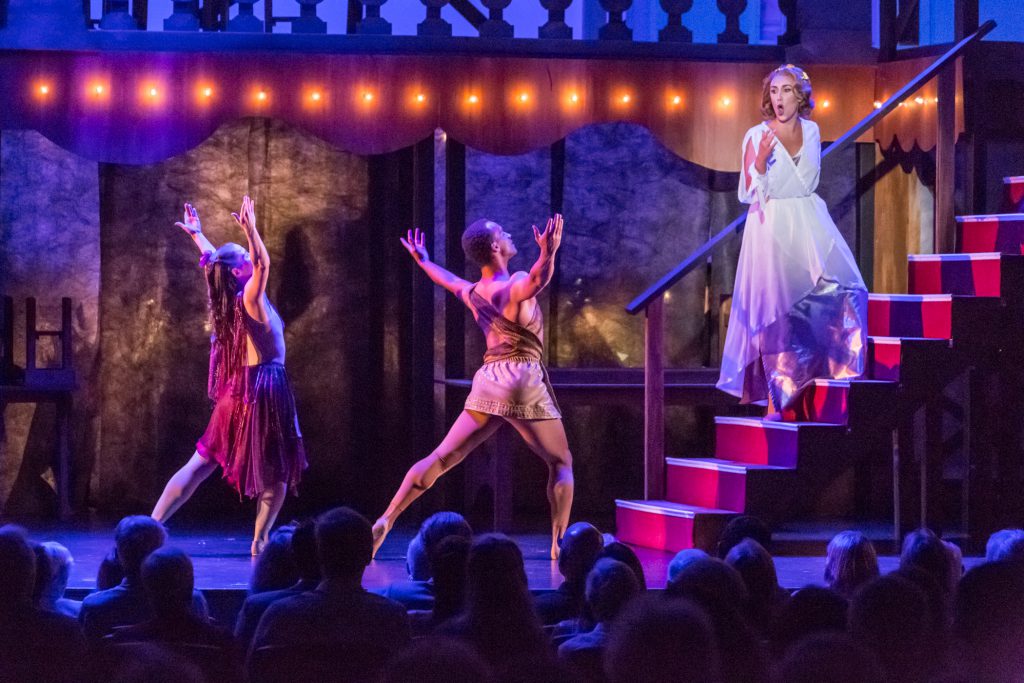 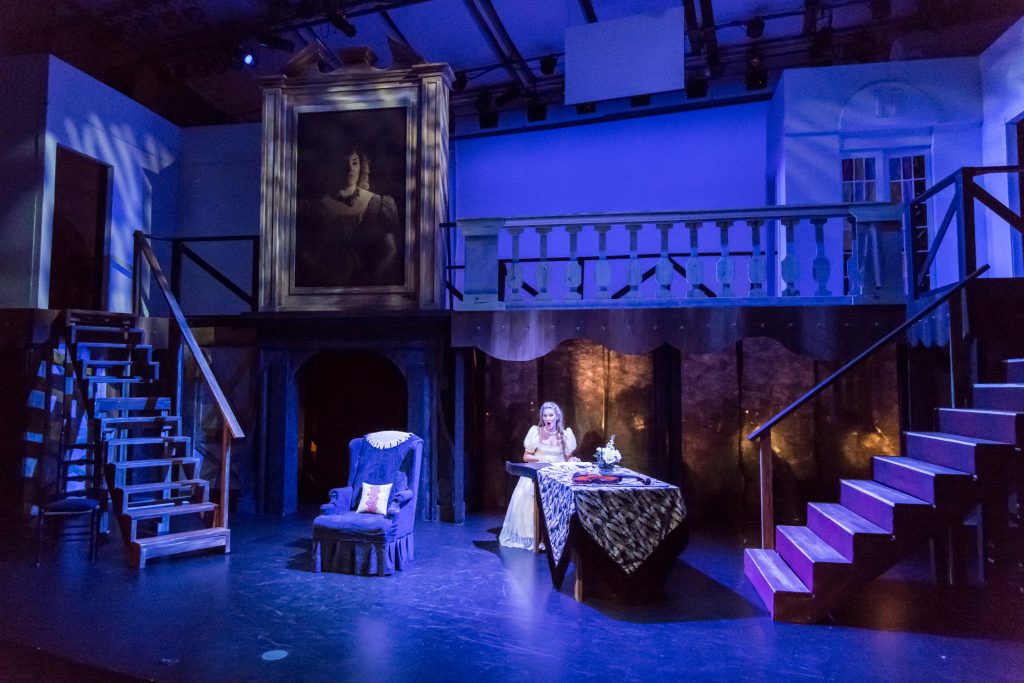