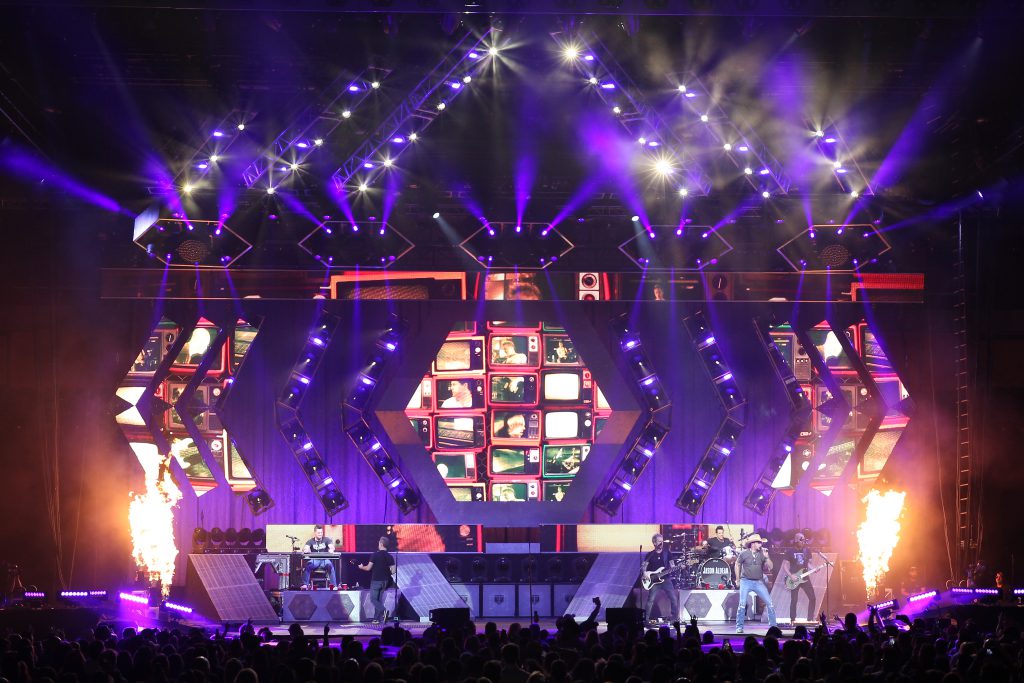 “The road is life,” famed Beat author Jack Kerouac once wrote. Keith Hoagland would have no argument with that. Before starting a project, the Tennessee-based lighting designer and programmer is likely to hop on his Harley and take off on a remote winding Williamson County road with the music of his client playing on his headset.

Alone on the road, passing the black oak and birch trees in a blur, he connects to the essence of his clients’ music. Weeks or months in the future at some big arena in Dallas or New York, it is this connection that will inspire the spot-on punting that has earned him a stellar reputation among his peers and made him much in demand as a lighting director as well as a designer.

Hoagland, who has worked in various capacities for stars like the Jonas Brothers, Usher, Blake Shelton, Wynonna and LeAnn Rimes, in addition to his current principal client Jason Aldean, believes that passion for an artist’s music must run through concert lighting for it to reach its full potential. Underlying this powerful emotional force in all of his work, though, are finely honed technical skills, along with a careful attention to detail.

Speaking to us from his company, CKP Lighting, Hoagland shared some insights on how he balances passion and planning on his full-throttled lighting ride.

You’re an avid motorcycle rider. Are there any similarities between riding a bike and running the boards at an arena concert?
“I would say muscle memory. Meaning that you want your basic riding skills to be such a habit that you do not think about riding. Just like running a console. No matter what flavor of control desk you run, you have got enough run time behind the desk that you do not have to think about the basic operation of it. This way you allow yourself time to be able to think about the little things or notice things of change on the stage.”

“I think my advantage or useful experience regarding punting is having a strong background in music. I went to school for a music degree in percussion performance. I use my background in music theory and rhythms, as well as song structure, all the time. It helps me have a good guess what direction the artist or band is going with their song.” 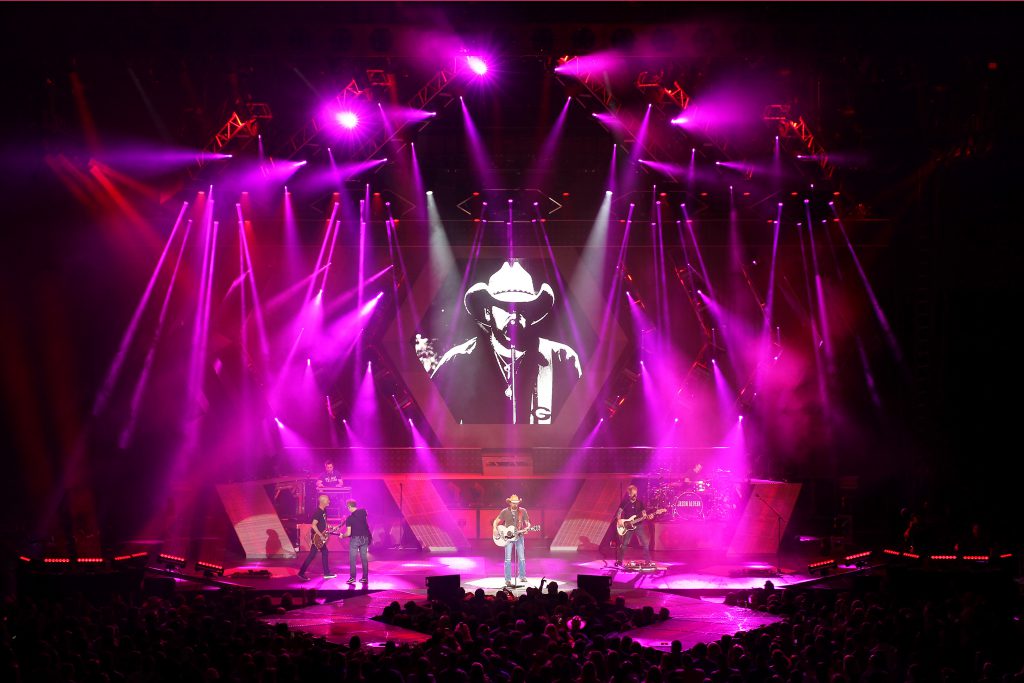 Do you have a general plan in mind when you punt, or is it all improvisation?
“When I write a punt page I have several basic things I always do. I have about five basic looks and then use other cue stacks of color, then gobos so I can hit at random. Then I have a handful of effects I always try to record into the page like gobo rotations, ballyhoo moments, fly outs, several different dimmer chases, etc. With these being in a normal setup for my punt page, I then create different looks with any combination of these basics. As I learn or feel how the artist or band songs are structured, I then can get more into the creative things. The key is having your basic setup the same all the time on the control desk no matter what fixtures or system that desk is connected to. This way you are focusing on the music or action going on at the stage versus getting around on your desk.”

Do you change your punting from show to show on a tour?
“My punt page changes each year just by my learning new ways of doing things and figuring out something new or cool to me. Each board op needs to figure out what works for them. Everyone is different, not all workflows work for everyone. That is why I love a desk that’s user-definable.”

How do you prepare for a big tour?
“I spend a lot of time listening to the artist’s music. In my spare time, I play that music even when not working in the office or what not. My go-to for prep for a tour is downloading the artist’s music to a USB stick and then plugging it into my motorcycle. I then go for rides. I get to free my mind of work because I am watching the road and enjoying the ride. But at the same time, I am learning that artist’s music by listening to it all the time. So, by the time it comes to rehearsals, I am hoping I know the basic format of the song; even if they do new arrangements, the song structure is usually still there. This helps so much when they do make a change, because then it is so noticeable.”

What is the most essential thing to a good lighting designer-lighting director relationship?
“Communication. Open dialog, good or bad, you still need to be able to communicate. If there is no communication, then there will be issues, and with issues come stress and failure. Do not be afraid to ask questions or say you do not understand.”

When you’re on tour, you often have to change the designer’s plot to fit the particular demands of a specific venue. How do you do that while still remaining true to the designer’s intent?
“That is hard at times. You really have to know and then trust what you know is programmed in the desk. Having a good sense of what and how the show is programmed in the desk allows you to be able to make constructive decisions about what to cut or not cut if the show has to be changed to fit a venue — be it safety or just sheer physic that the show cannot fit into the venue. Then with said knowledge of the programming, know what has to be cut and then make the edits to the show file so it still has the same impact or feel of the complete show prior to the cuts.” 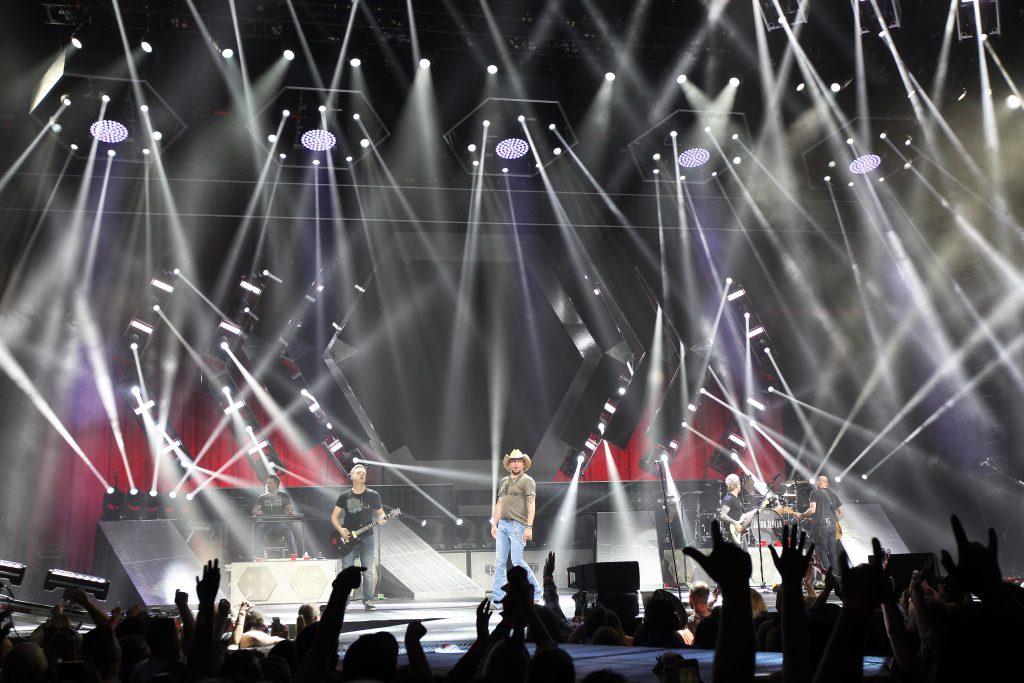 Who were the biggest influencers in your career?
“I have to say three people have been huge in shaping my knowledge of how to do lighting: Peter Morse, Eric Wade, and Howard Ungerleider. Each are special in my life in their own way. Peter and Howard because of so many great designs that each has done in the past, as well as the opportunity that both of them have given me to tour with them. Plus, they both made me feel it was ok to ask all those simple small questions you always want to ask, but somehow are afraid to. They really shared lots of great thought and know-how with me. “Then Eric Wade; he is really like a brother from another mother. He has poured more time and life into me than I can ever thank him for. Through life issues, to long road tours, he really has helped me learn how to function and succeed in not just doing lighting as a career, but life while touring. These three folks for sure have been the reason I have been so lucky and honored to be in a career of lighting. I thank all three for their unselfish and very kind indulgence into my life.”

What do you regard as the three big highlights of your career?
“Touring with Rush and Howard. Touring for Bette Midler with Peter and Eric, and basically having a career that has allowed me to do what I love doing for this long.”

What would you have done if you didn’t become a lighting designer and director?
“Not sure, may stay doing audio work — maybe.”

You’ve done a lot of programming. Some people say that programming has become so specialized that it’s a field unto itself. What are your thoughts about that?
“I think it for sure has evolved into a huge field. My take is that you do what you know, meaning know your limits on things. Do not go in with a ‘fake it ’til you make it’ attitude. Lots of folks can see through that way of life now. With the way programming has become with the advance of console control, you either know it or you don’t. Again, back to what we talked about earlier – muscle memory comes into play here. Practice and practice so you do not have to think about any of the basics. This way you can focus on how to do that really cool effect or think through a massive setup with ease.”

Can you walk us through the collaborative process of programming? How does it work with the lighting designer? Is there a lot of back and forth? Are design ideas ever changed because of your input as a programmer?
“Every designer and programmer has their own way of doing things. No one formula is key for every job. Designers tend to hook up with programmers that have same thought process that they do. This makes working together much easier. On the opposite side of the coin, if a designer calls you for a job for some music act that you have a strong dislike or view on, it can create some speed bumps. People want to work with folks and have a good flow or ease. Why have hardship? I mean yes, a job can be tough at times, but if your work team has issues or struggles just in simple issues, then when things do get hard, it just falls apart. Again, know and trust your limitations — with a good understanding of your own limits.”

You’ve done a lot in country. How does lighting country compare to lighting other forms of popular music?
“Yes, I have done a lot of country. I enjoy this style of music. I also enjoy rock and pop. As far as how it compares, I think country has, for the most part, basic song formats they follow. Usually it is a very straight forward A,B,A,B,C,B format, which in turn makes blowing through a set list for programming fast and allows for more time to be creative. It can also make it challenging because it is so formatted as well.”

What do you think is the most important new technology to come along in lighting in the past ten years or so?
“I think the LED fixture has been huge. Especially since it’s finally gotten to the point where it’s bright enough and has the dimming curves to match an arch lamp-based fixture. I also think networking within fixtures or media servers has really grown into a huge medium now. All the networking and functions you get between consoles, to fixtures, to servers is mind boggling at times, but it also allows for some amazing projects.”

A lot of your recent shows have massive video walls or screens. How does this affect how you light?
“Video is huge nowadays. It is now not just something you play back as an IMAG shot, but something to think of as another fixture or source you have to be aware of. The shows are getting to the point where it is no longer divided as department against department. Now all departments must work and play within and to each other. If you don’t do this, you will get left behind.”

How do you want to be remembered as a lighting designer?
“Hopefully being that someone folks want to be around and enjoy. Life is too short, go enjoy it.”