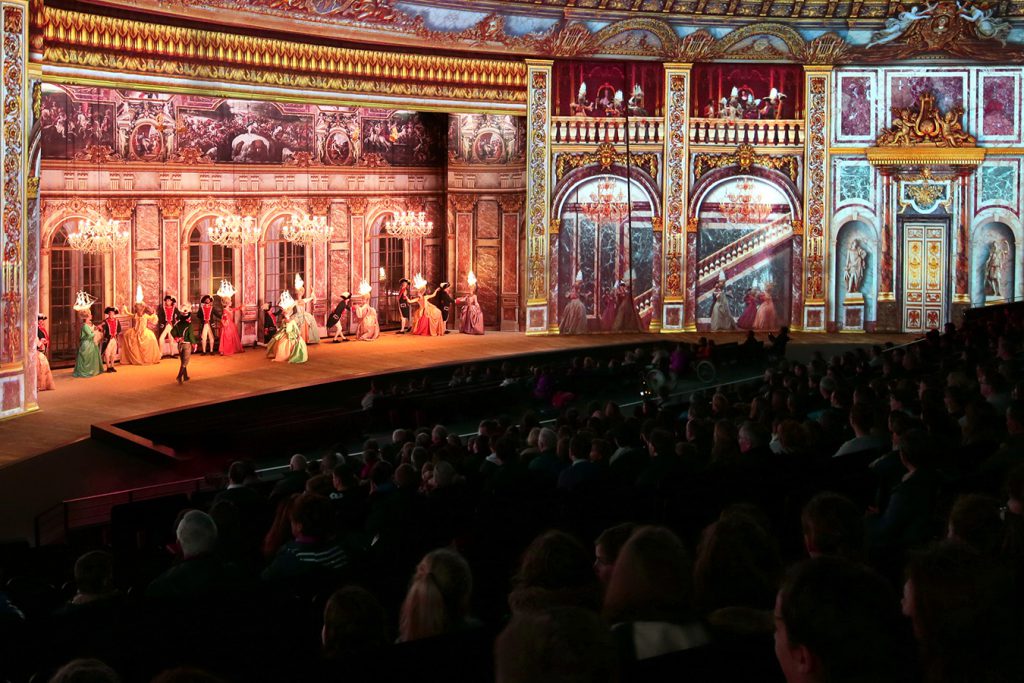 LES EPESSES, FRANCE – Typically, when Koert Vermeulen creates a lighting design for a theatrical production, it’s the fixtures, not the theatre and the audience, that moves; but then there are few things about Le Dernier Panache at Puy du Fou that can be considered “typical.”

The largest permanent theatrical production in the history of France’s famous “Grand Parc,” Le Dernier Panache is performed in a new 7500 square meter theatre that rotates around a stage by utilizing advanced motion technology. The 2400 members of the audience don’t watch the drama, which chronicles the adventures of an 18th century French naval hero, as much as they become immersed in it on a multi-sensory level. 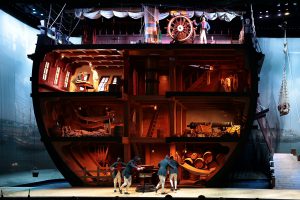 A group of 30 characters performs in Le Dernier Panache, playing out their scenes in 22 sequences on seven different stages that the audience views as the seating area rotates. It was up to Vermeulen and his team at ACT Lighting Design to help make the transitions from scene to scene so seamless that the changeovers are virtually imperceptible to the audience. The Brussels-based LD accomplished this feat through careful planning, a deft lighting design and the adroit placement of fixtures, including 120 Ovation E-910FC color mixing ellipsoidals from CHAUVET Professional.

“Puy du Fou built a new cutting-edge theatre for Le Dernier Panache to create a true immersive experience for the audience,” said Vermeulen. “The rotating theatre is a big part of the realism, as it allows scenes to flow one into another as the story unfolds.”

Having an audience seating area that moves did require Vermeulen to implement some unorthodox design concepts. “All of the fixtures we have ‘inside’ the proscenium are non-moving heads, while all that are in the audience area are moving heads,” he said. “This is a little bit different from the usual theatre setup, where you would see more moving heads onstage and fewer in the house. However, we did the opposite of this, because I knew I needed absolute flexibility for the houselights to be able to go anywhere, anytime as the seating area moved. We also placed the moving heads so that they are just peeking from the ceiling. This gave us the option of being able to focus them anywhere without obstructing the video projections. Things got tight, but we made it work.”

Vermeulen positioned all 120 of his Ovation E-910FC fixtures within the proscenium and used them for side lighting, cross lighting, top lighting and gobo washing. Throughout the production, the RGBA-Lime Ovation LED fixtures are used to produce a rainbow of colors. 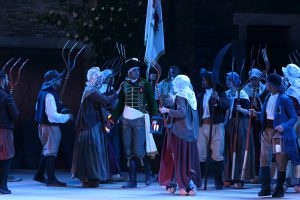 “I almost never used a real ‘white;’ mostly the Ovation light was colored,” said Vermeulen. “The color mixing worked really well. I never had to compromise really on the colors I wanted to use. It’s not always the case that once in the theatre that a fixture ‘just works.’ A lot of times, as a designer, we need to program around the limits of the fixtures to get the look we want. In this production I am happy that I did not have to compromise; the Ovation fixture is able to give me the colors I need and the intensity I want. We tested all our options, and the Ovation was the best price-quality ratio by far.”

Another key feature in the immersive Le Dernier Panache design are the 10-meter high HD video screens. Creating an intensely realistic and vivid background to the drama unfolding on stage, the screens are used to display an array of images, such as scenes from an island, a forest, a prison cell and the inside of parliament during the French Revolution.

“Of course we coordinated lighting with the video content,” said Vermeulen. “Sometimes the video designers followed our direction. Sometimes we followed theirs. On one occasion the artistic director even asked me to ignore the video projection content completely, and just make a more magical atmosphere for the Snow scene in front of the burnt-down chapel. The goal was always the same: to have an immersive design that transported the audience into the middle of the drama.”

Vermeulen, who has a long standing relationship with Puy du Fou and was the lighting designer for its award winning CinéScénie show, credits his collaborators with the success of his design.

“Given that this is the biggest indoor permanent spectacle and original creation in the history of the ‘Grand Parc’ Puy du Fou, it isn’t surprising that many talented people were involved,” he said. “We worked for several months with a team of experts from 58 companies. The artistic direction of Nicolas De Villiers and the challenging vision of Puy du Fou were critical. My associate lighting designer Luc De Climmer and assistant lighting designer Julie Boniche also played key roles. Just as there were a lot of moving parts coming together with the theatre, so too were there a lot of creative people coming together in the design process. We are proud to be associated with this production.”