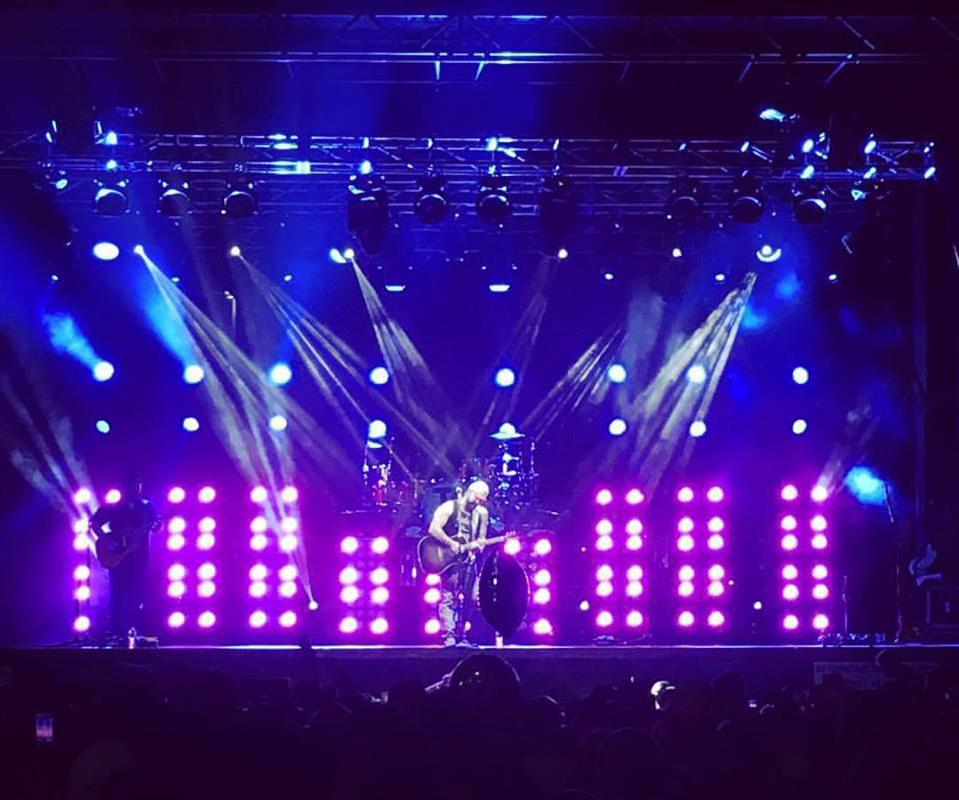 NASHVILLE, TN –  With his distinctive heartfelt vocals, Tyler Farr sounds like he was born to be a country singer, but the popular star’s career path started out on a far different track. Long before he reached the top of the country charts last year with his single “A Guy Walks Into A Bar,” the Missouri-born crooner was classically trained as an opera singer. Like the multi-talented Farr, the Nexus 4×4 fixtures on his current touring rig also are exhibiting a wide range of capabilities.

Lighting designer Larry Foote rented 24 of the CHAUVET Professional LED panels from 4Wall Entertainment for his Farr tour rig. Drawing on the versatility of his pixel mapped Nexus units, Foote has been able to create an impressive variety of looks for his client, while still meeting the objective of keeping his rig simple and flexible.

“We’re playing a lot of festivals and venues of very different sizes, so I wanted a rig that could be set up fast and was also space efficient,” said Foote, who is serving as the Tour Director for Tyler Farr in addition to being the star’s lighting designer. “I also wanted a tall rig that conveyed a powerful image.”

Given these criteria, Foote built his rig on set carts. Although they offer many advantages, the carts have also presented the LD with challenges. “Designing around the set carts was the most difficult part of the process,” he said. “Sometimes when I’ve thought of something cool, I’d wind up being disappointed when it turned out that the carts were too small.”

Drawing on the versatility of the Nexus panels, Foote has been able to overcome these limitations. “I thought of a lot of different ideas with the Nexus panels, which really wasn’t too hard since there are so many different things you can do with them,” he said. “By using the panels as a wash and blinder, creating monochromatic arrays with them, and varying their intensity level, I’m getting a range of looks that keep the show interesting. I’m also bitmapping the Nexus through the grandMA2 Light to get some cool chase sequences. Bitmapping a grid like this gives me what I’m looking for — and it’s super fun!”

Foote arranges his two dozen Nexus units on a grid that measures 9 panels wide by 3 panels tall. Starting from stage right, he positioned three of the panels on a vertical truss. The next two vertical sets of three panels live inside a set cart. This configuration is mirrored on stage left. In between, the LD placed three vertical sets of dual panels on the front of the drum riser. This grid structure creates a sense of depth on stage and focuses attention on the performer.

“The grid makes a solid visual impression that looks good live and on camera,” said Foote. “We’re really able to generate some extra excitement with the grid when we turn up the brightness of the Nexus. With Tyler this year, we’re playing festival slots where we sometimes have the sun in the band’s face for the first 20 minutes of the show — but the panels show up fine in daylight. It’s nice knowing that when you’re outside, you have the option of using the panels at their full potential.”

Foote is quick to add, though, that there is more to his Nexus grid than its powerful punch. “Some people think the Nexus panels are just blinders. Then when I turn them on and they see all of the different looks I can get, they quickly change their minds,” he said. “Plus house guys love me when I tell them how much power I’m NOT pulling. Stage hands are enjoying the ease of this rig and how fast it is to assemble. Now that we’re a month into having this rig on the road, I can say that I’m extremely happy with it. Jennifer Moore and Cathie Berbena Lloyd at 4Wall helped get me this gear and they didn’t steer me wrong.”