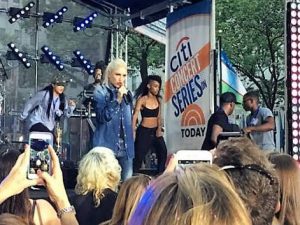 NEW YORK – From her ska band days with No Doubt, Gwen Stefani has filled every stage she ever set foot on with flair, style and an unmistakable swagger. When the platinum blonde multi-Grammy winner appeared on The Today Show’s Citi Concert Series recently with her trademark deep red lipstick and backed by dancers in leopard print body suits, lighting designer Peter Greenbaum wanted to do something special to accent the onstage magic. He provided this extra pop by beefing up his Rockefeller Plaza rig with 20 of the new CHAUVET Professional Rogue R1 FX-B moving LED fixtures, supplied by WorldStage.

“Gwen is one of the most charismatic performers you’ll find anywhere,” said Greenbaum. “We wanted to create the most dynamic lightshow we possibly could on a stage of this size for her appearance, not only for our TV audience but for all the people who came out to see her live.”

For Greenbaum, the Rogue R1 FX-B fixtures provided a natural fit for the Stefani performance. “I like the intensity of the five moving heads on this fixture,” he said. “They provide a great pop to the daylight stage. Because we can create so many different looks with the different pan and tilt movements of these fixtures, it was relatively easy to give our stage a bigger concert feel to go along with Gwen’s performance.”

Greenbaum positioned his 20 Rogue R1 FX-B movers in two overhead horizontal rows, each holding 10 fixtures. The bottom row was 8’ and the top row was 11’ off the stage deck.

“Having 10 of the Rogues on each row fit our stage perfectly,” he said. “I wanted to play with the units in straight lines. The symmetry of each line holding 50 heads looked clean and made a nice statement. Then when we had each beam go its own way, it was like wow! An outpouring of moving light that was impressive to see live and on TV.”

The Rogue R1 FX-B fixtures also blended well with another CHAUVET Professional product that’s become a familiar standby on The Today Show: The Nexus 4×4 COB LED panel. “I like the way the Rogues provide me with a bridge to the Nexus panels,” he said. “The colors are very close, so they can tie in together. As for the Nexus panels themselves, I like the way they frame the summer stage, whether it’s by using them in the four corners or just the two down stage corners. For Gwen, I used six Nexus panels on each side of the stage.” 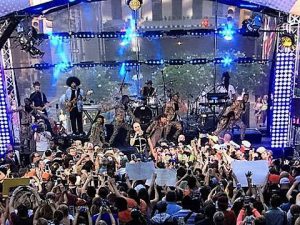 Greenbaum, who became intrigued by the Rogue R1 FX-B after seeing it on a YouTube video, experimented with the fixture a week before Stefani made her Today Show appearance. “After I saw the Rogue video, I contacted WorldStage,” he recalled. “As usual, Drew DeCorleto at WorldStage was extremely helpful. I tried 10 units for Shawn Mendes the week before and was so impressed I doubled the number for Gwen. I would like to use even more of them in the future.”

Like millions of Today Show viewers, Greenbaum was thoroughly taken with the way the Rogue fixtures complemented Stefani’s dynamic performance. From the moment she started her set with a high-energy rendition of “The Sweet Escape,” on through hits like “Hollaback Girl” and “Misery,” the superstar and the moving Rogue R1 FX-Bs seemed perfectly in sync with one another, creating a captivating performance that had the look and feel of an arena concert.