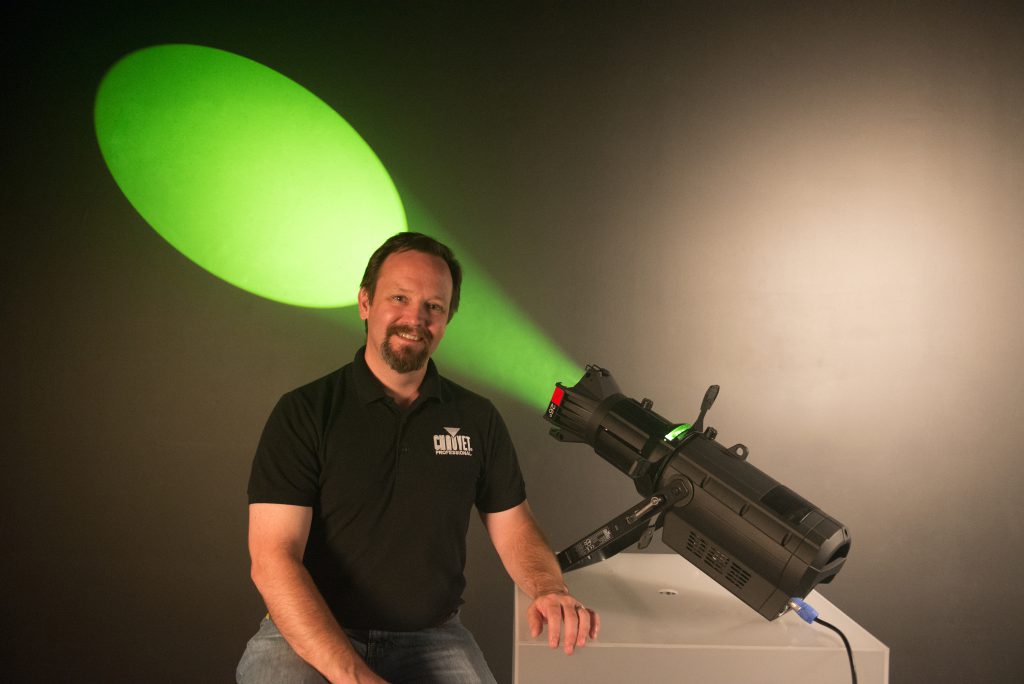 There are many good reasons why aerial lighting is an integral part of so many designs. Aerial effects not only make a show look bigger, even when relatively few fixtures are used, they also add a sense of architectural depth to the stage. This depth draws attention to the stage itself, even though the lights are pointed in the air.

Yet despite the popularity of aerial lighting, it doesn’t always get the attention it deserves when designers are putting together their rigs. Ford Sellers, Senior Product Manager of CHAUVET Professional shared some tips with us about selecting and positioning fixtures for aerial effects. We’re confident that following his advice can help take any lightshow to new heights.

What do you think aerial effects contribute to a show?
“Aerial effects can have a major impact on audience experience, and on the general feel of a show. At a minimum, the allow a performance to fill a space, and become immersive for the audience. Even a show with a relatively limited lighting budget can be made to appear larger, by lighting not just the talent on-stage, but also the areas above and around the stage. When done well, aerial lighting can make a 30’ wide performance space feel like it fills an arena.

“If we think of the stage like a painting. The lighting designer is then the painter. Some spaces and shows may require separation from the audience, providing a window into the life of the subject, like a painting in a frame. Others may be more like a mural adding the areas above and beyond the stage, the artist is then able to bring the audience into the world of the subject.

“Aerial lighting can be used alongside the lighting of architectural elements to envelop the audience in the show. Even when the artist is providing a window into the space, they want to create an entire world onstage. Aerial lighting can imply environment, and allow a performer to be emphasized, or isolated from the rest of the stage.”

What’s the difference between creating an aerial effect with a wash vs a beam?
“Going back to our artist analogy, the different types of fixtures can represent the different brushes and tools in a painter’s tool kit. When lighting designers are painting the space, they may want to provide broad swaths of color, as the base layer. On top of that, they will want to add texture, and even punctuate the canvas with bold, solid lines. Wash fixtures allow them to lay in the broad layers of color over which the rest of the painting will be built. So, the washes act as either light spray painting, or even something more like the watercolors which allow images and colors to wash together. Spots fill in with additional texture (via gobo washes, prism effects, and especially dynamic movement), and help to define the space. Beams allow for the bold solid lines which can be used to either imply solid feeling structures, or to reach out over the audience to pull them into the space.

“Where this paradigm becomes especially exciting is with the dynamic changes that moving heads allow. Wash lights with zoom can go from providing atmosphere to drawing lines to the performer. Spots can go from providing subtle and smooth organic textures over the stage, to swinging into the audience with sharp, almost tactile shafts of light. Beams can go from providing solid, colorful lines, to dynamic, organic effects that span the entire environment when they are used with gobos and prisms.”

Should you match the output of an aerial effect to the size of the venue?
“Absolutely. The output of the fixture is the equivalent to the amount of paint on the brush. A brush with less paint can be used to draw a subtle line, but if you try to spread that line into a larger area — or try to draw it too far — you simply lose the effect; or to put it another way, you run out of paint. You can address by either using more brushes (fixtures) to paint your environment, or by using brushes which can hold more paint. For instance, it would be difficult to paint an entire wall with watercolor brushes. It would be far more effective to use rollers, and 4” brushes.

“The same is true of lighting fixtures. If you are lighting a small, intimate space, you can use smaller fixtures like the Rogue R1 Wash. However if you are lighting a larger stage, or club, or even an arena, you need much more powerful fixtures like the those in our Maverick series, which can provide the amount of light that you will need to fill these larger venues. Another important consideration is what sort of light you will be competing with. In today’s world, where we have increasingly large lighting rigs and massive video walls, the space over the stage may already be filled with light. If you are going to have your aerial effect visible in front of a video wall, it has to be extremely bright. This is where Beam and Hybrid fixtures can be especially effective.”

Speaking of hybrids, can elaborate on how to mix aerial washes and beams?
“You need to be very aware of balance when you do this. Beams are incredibly intense. For instance, our smallest beam in our professional line (the Rogue R1 Beam) ouputs almost 80,000 lux (roughly 7400fc) at 15m (50’). This will punch through very powerful washes. The difficulty is in balancing the fixtures providing your base aerial effects, with these incredibly bright fixtures. Strategies for effectively mixing beams on top of washes can include using the layering prisms in the R1 to spread the effect, and using the gobos to make the unit go from a single solid beam, to a variety of aerial shapes. Using the Gobos and Prisms together can be even more effective.”

Any other advice on making aerial lighting more impactful or interesting?
“In real estate they say ‘Location, location, location!’ In aerial effects, it’s ‘Contrast, contrast, contrast!’ Using contrasting intensity levels of washes, spots, gives you the capability to paint in layers, and build an environment with depth. It also allows LDs to emphasize a particular portion of the design. By using contrasting and varied colors you can make different elements of the design stand out from one another. You can also do this to separate aerial effects into discrete elements. This not only builds excitement, it also brings the audience into the show.

“You should also think in terms of contrasts in rigging positions. Having units above the performance space can help set the environment. Having units which project from the stage floor out into the space can draw attention to where the fixtures are most bright –the stage. This will really draw attention to the performance, without lighting the performers directly. Having fixtures hung around the outside of the stage, and even further into the venue can allow the LD to not only direct the audience’s attention, but to really reach out into the space to eliminate the boundaries between the audience and the show with aerial lightning.”

Are there any other features of a fixture that you should look at when choosing it for aerial lighting?
“Aside from fixture type, and output feature set is a biggie. Zoom, layering prisms, rotating gobos, and broad color pallets are all features that can affect a designer’s ability to create beautiful and immersive aerial experiences for an audience. A fixture with a wide zoom angle (like the Maverick Mk2 Wash) is going to be able to provide excellent beam effects, and broad wash effects. Fixtures with layering prisms are going to allow for far more interesting visual effects than beam or spot fixtures, alone. And fixtures with dual rotating gobo wheels and CMY color mixing allow for more subtlety, and varied contrast in designs.”

What is the biggest challenge when lighting air?
“Making the light visible. The use of Haze, or fog can help enormously. However, these are not always available and effective. For instance, an outdoor amphitheater may have a difficult time keeping haze and fog onstage, if there is even a light breeze. Most theaters have very different air currents when the audience arrives, and the AC kicks on than LDs see during their cueing sessions. Being able to control the atmosphere in a performance space will have a major effect on your ability to paint the air.”