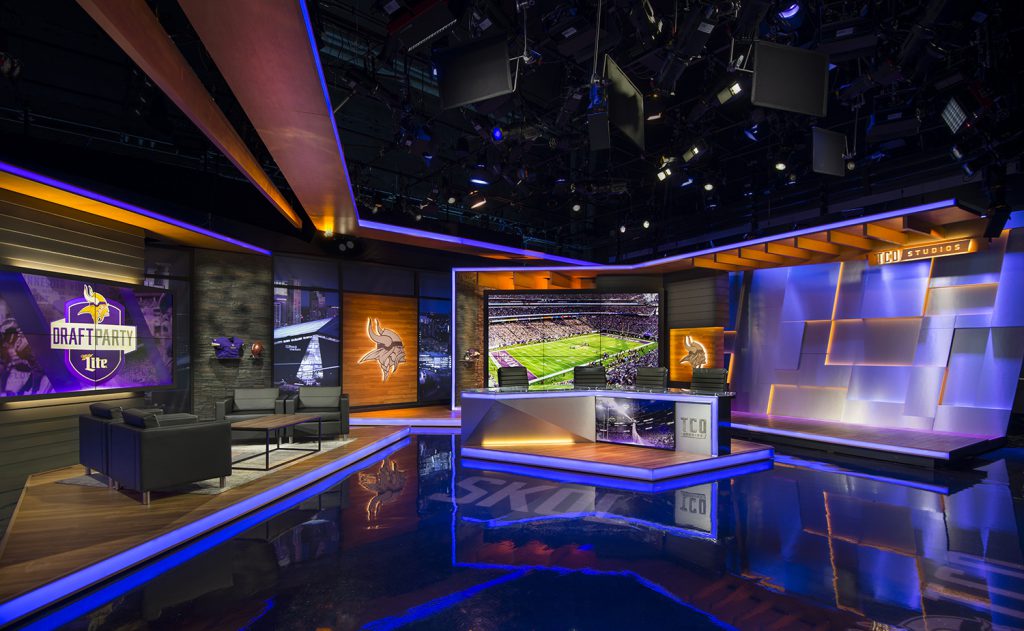 EAGAN, MN – The Minnesota Vikings could be headed toward a great season. Sports Illustrated has predicted they will win the NFL Central; so too have three out of four ESPN football experts. Of course, no one really knows how a team will do until the game is played, but one thing is certain, the “Purple and Gold” will have one of the most spectacular looking broadcast sets in the NFL (or anywhere else) this season, and for years to come.

This March, the team opened a state-of-the-art studio at its Twin Cities Optical (TCO) Performance Center headquarters and practice facility.  Featuring four distinct video-shooting areas, the studio, designed by Peter Provost of Provost Studio, is illuminated by a colorful lighting system created by Mike Grabowski of the Lighting Design Group that features close to 100 CHAUVET Professional Ovation and COLORdash fixtures.

Beyond its breathtaking appearance, the studio offers maximum flexibility for broadcasting during the football season and throughout the year. An example of this can be seen its main section, which has a cutting-edge acoustic wall that rises to open to a 170-seat theatre for live audience programs. 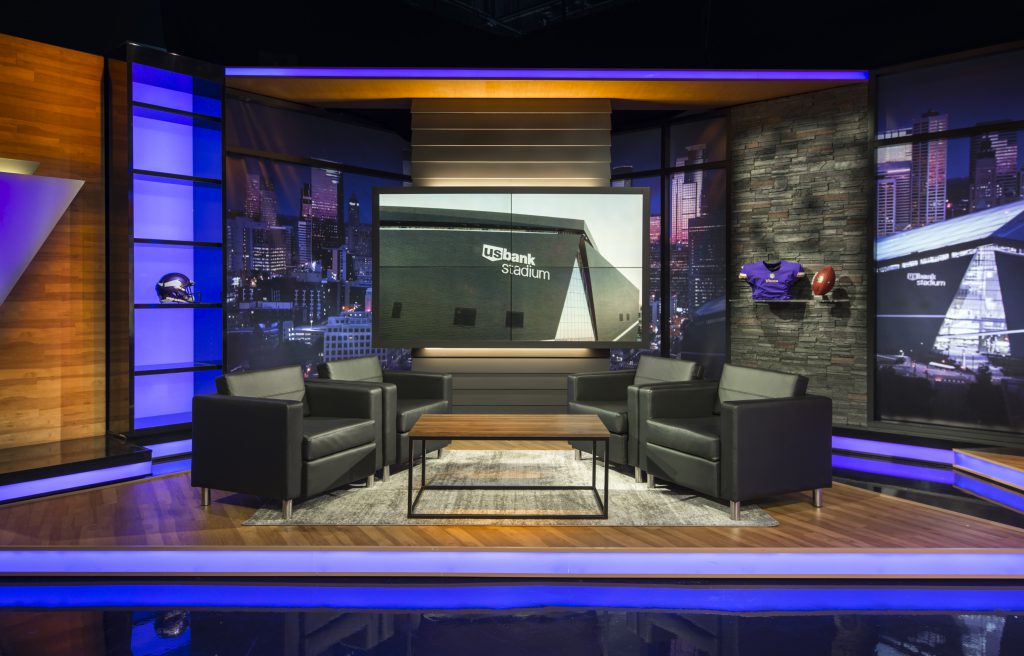 With its ability to create a rainbow of realistic colors and change them quickly, the Lighting Design Group’s system supports the TCO studio’s combination of beautiful aesthetics and responsive versatility.   “This was a really neat project to be a part of, not just for its great looks, but also for its functionality,” said Grabowski. “It’s the first fully fleshed-out studio that the Vikings have had, and one of only a handful of such facilities in the entire league.

“From an aesthetic standpoint, this studio is sleek, cutting edge and powerfully branded without being over the top,” continued Grabowski. “Bryan Harper, the Viking’s Vice President of Content and Production, Jordan Struck, VEN Producer, and the production designer Peter Provost deserve a lot of credit for making something very special happen. I think this sets a gold standard for the league.”

There are four distinct shooting sections in the TCO studio. The primary area is devoted to the anchor desk for potential sportscasts, gameday halftime reports and post-game programming. (This area also converts to a live audience broadcast studio when the acoustic barrier is raised.) A second area with comfortable leather chairs is used for in-depth sit-down interviews, while a third edgier-looking section hosts social media podcasts and a fourth serves as the space for standup reports.

Grabowski positioned 75 Ovation E-910FC LED ellipsoidal fixtures with a mixture of 19°, 26°, 36° and 50° lenses throughout the studio. The RGBA-Lime fixtures serve as key lights as well as color washes in the four shooting areas, where they are hung from center-set positions.  Additionally, the Ovation units work as front stage lights when the acoustic wall opens and the main studio is used for live broadcasts.

“Being able to flip the color from the Ovations to anything we need is hugely helpful, especially given the emphasis on versatility at this studio,” said Grabowski.  “Another invaluable feature was the ability of the Ovation fixtures to project very crisp gobos. This is a sports studio, so we needed to project team logos — and of course they had to be flawless. Aside from delivering this level of perfection, the Ovations allow our clients to preview gobos before they purchase anything. On several occasions, we printed the gobos on acetate so we could get the sizing and art exactly right….and then we sent it off to be built in glass after we knew we had EXACTLY what everyone loved. That was a real client-pleaser!” 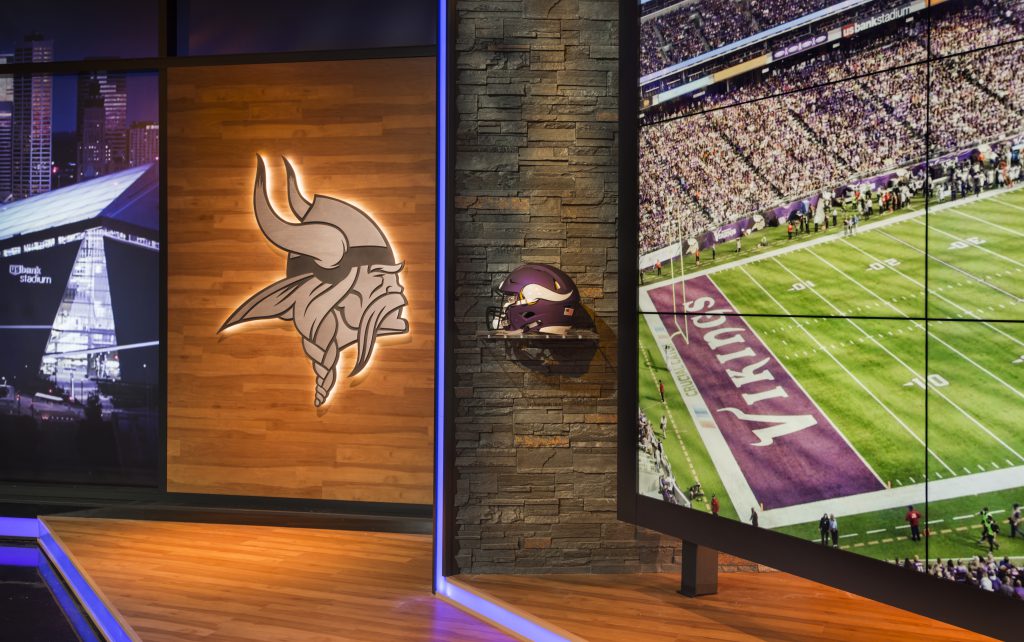 For added color accents, Grabowski has positioned 20 COLORdash Accent Quad fixtures throughout the four shooting areas. Aside from adding extra color, these fixtures are used as eye candy in some backdrops, always with an emphasis on displaying accurate colors.

“Along with the quality and evenness of the light, color rendition is of the utmost importance here,” said Grabowski. “The Minnesota Vikings logo colors are instantly identifiable, and they must be accurate. We even built two versions of a lot of the colors—one for the naked eye, when tours are being given, and another for the broadcast.  It’s all part of the versatility that’s been designed into this studio.”