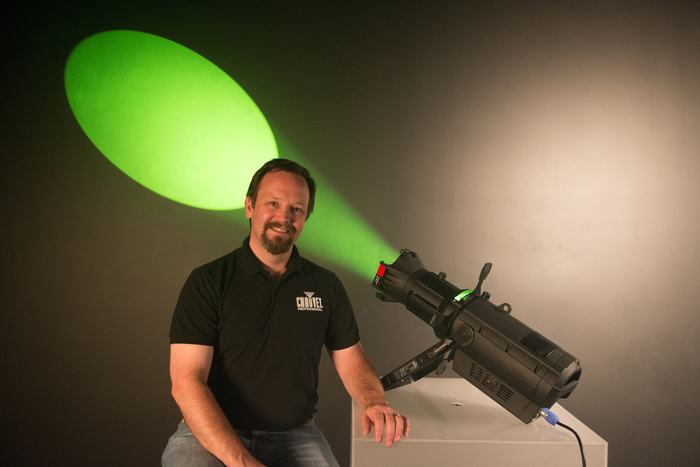 The addition of lime LEDs to a color mixing fixtures does a lot of good things. It pumps up CRI and brightness and in so doing makes lighting more vivid. Nevertheless, there are still instances when you might want to limit the level of lime being included in your color mixing. This is why we designed the Ovation E-910FC with lime control features.

Ford Sellers, Senior Product Manager at CHAUVET Professional gives us the lowdown on lime, explaining in his own inimitable style, why it’s added to LED color mixing fixtures in the first place — and why it’s important to be able to control it in some applications.

Before we look at why it’s important to control the amount of lime. Can you tell us why lime is added to the Ovation E-910FC in the first place? What does the presence of lime LEDs do to color rendering?
“The Lime LED was developed to boost CRI and brightness in the Philips HUE system. What we’ve found is that it adds a vividness to both the projected aerial colors, and to the colors on the surfaces that are being lit.”

So why does lime make this difference?
“Lime, specifically, does this in two different ways. It fills in a section of the spectrum that has been missing from previous LED light sources (the cyan/pale green spectrum), and its output is matched almost perfectly to the photopic curve. This means that the color of light that is emitted from these LEDs aligns almost perfectly with the light that our eye is most sensitive to. The effect of this is that the light outputted by fixture looks brighter, the color rendition of objects lit with fixtures utilizing this LED is increased, and generally these objects appear more vivid than they would under traditional RGBW or RGBA LED lighting.”

If the addition of lime is such a good thing, why would you want to control it? In other words, in what cases would you not want to add lime, or add less lime?
“Using the Lime LED affects the color of the light emitted by the fixture. There are times when a lighting designer will want a very saturated color. Including the Lime LEDs in this situation would decrease color saturation, and make the light appear paler. So, we give the lighting designer the ability to control whether or not to use the lime, and how much to mix in to any lighting cue.”

Can you give us examples of when you would want to limit lime?
“Sure, a for instance is when lighting in primary colors, or a congo blue, the deep color saturation is exactly what the lighting designer is after. You see this commonly in Dance, and abstract theatrical productions. Designers will also use these saturated colors to light portions of a stage in musicals, and concert lighting. If you pick up a swatch book from Rosco, Lee, or GAM, you will see a lot of very saturated colors. Many LDs use colors like these to make bold statements, or create complex visuals.”

Based on what you said a moment ago, the control of lime in the Ovation E-910FC is not an all or nothing type of thing. Does this mean a designer can control the amount of lime I add by degree?
“Yes. In the Ovation E910 FC (and other ovation fixtures using the Lime LED) the Lime works just like any other LED color in our fixtures. It can be added by degree (in either 8-bit or 16-bit color mixing).”

How is lime controlled in the Ovation E-910FC?
“We include the Lime in most of our prebuilt colors, via the Virtual Color Wheel feature. However, we recognize that LDs may want to build their own color palettes, so we also list the recipes for the VCW colors in the user manual. This allows the board-ops and LDs to control not just how the colors look on-stage, but also how the colors transition between cues. This level of attention to detail is what allows LDs to deliver the best looking shows for both live and televised audiences.”

We talked about color, is lime also mixed with whites?
“Absolutely. Using the lime boosts brightness and color rendering in whites across every color temperature. We include an additional virtual color wheel channel that is just for different correlated color temperatures of white light. These all use various levels of lime. In addition, many designers will use our “VCW” recipes as a basis for their own color pallets, and mix up their own whites and colors. This is why we list the recipes for these colors in our manuals.”

What are the instances when a designer would want to limit the amount of lime mixed with whites?
“Some designers specifically try to limit the CRI of lighting in particular cues to change the CRI without changing the apparent color of the light. This is called Metamerism. For example, if you have a scene where romantic leads meet for the first time, you may begin the scene with relatively low CRI light, to make the world seem flat and lifeless, and then transition to higher CRI, to make the skin tones, costumes and scenery become more vivid when the characters interact.

“I saw this effect used particularly well in a production of The Wizard of OZ. In order to make the transition into Oz more dramatic, the lighting designer let the opening scenes of the play with sodium vapor lights. Then, when Dorothy arrived in Oz, the lighting was taken over with high CRI fixtures which appeared to be the same color. The effect was that the entire stage appeared to come to life right before the audience’s eyes.”

Do other Ovation fixtures have lime LEDs?
“Currently, the Lime LED is used in the Ovation E910FC that we discussed and the new Ovation Batten fixtures, the B565FC and B2805FC. It is our intention to include lime in the color mix for all “Full Color” Ovation fixtures, moving forward, as we feel that this is an important innovation, and is supremely useful to the theatrical lighting designer, especially.”