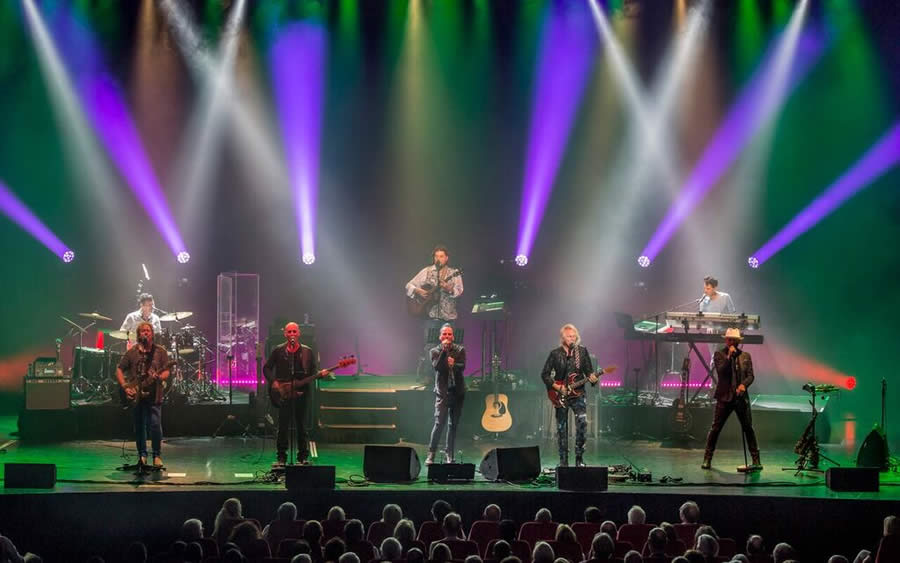 BRUSSELS – The word “individual” comes up often when Martin Thomas talks about lighting his longtime client Alan Parsons. It isn’t necessarily Parsons himself that the Tucson, Arizona-based LD is referring to, but each of the musicians that make up the pioneering Grammy winner’s band.

“The music of The Alan Parsons Project has always been founded on a variety of musicians based on their individual strong suits — and the live show is no different,” said Thomas. “All members have specific harmony parts in the music; and lead vocals shift throughout the show. Because everyone sings, key light and backlight for all musicians is critical. So, layers and atmospheric architecture make up most of the production with several negative space moments in the performance.”

At the last stop of the band’s European tour at the iconic Ancienne Belgique in downtown Brussels this August, Thomas was faced with a challenge when he had two electrics to work with instead of three. He nevertheless was able to achieve the layered looks his design called for, thanks to a collection of CHAUVET Professional Maverick fixtures supplied by Coruna Sound & Light. 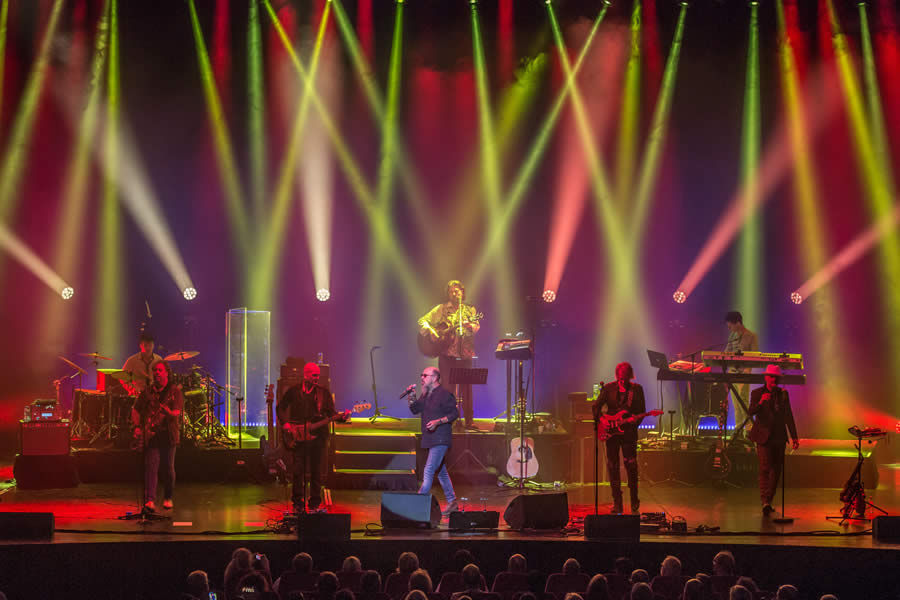 “On this tour, my design is based on having three overhead electrics, FOH truss and a floor package,” said Thomas. “At this particular venue we had only two overhead electrics, making layering the focus that much more critical, as there are eight active artists on stage at any given time.”

The 28 Maverick MK1 Hybrid fixtures in Thomas’ rig were instrumental in helping him maintain the focused layers of light needed to accentuate each performer on stage. He positioned eight of the hybrid fixtures on the first overhead electric, 12 on the second, and had eight units upstage to use as backlights on the musicians.

“In essence the MK1 Hybrids were used to define the band and space,” said Thomas. “The fixture was muscular enough to cut through the wash looks in both Spot and Beam mode with or without gobos and color, as well as in all aspects of Zoom. Many of the looks in this tour’s show transitioned from a hard edge spot to a soft flood — and even to a sharp beam on occasion. Never once were the MK1s ‘lost’ in the look.” 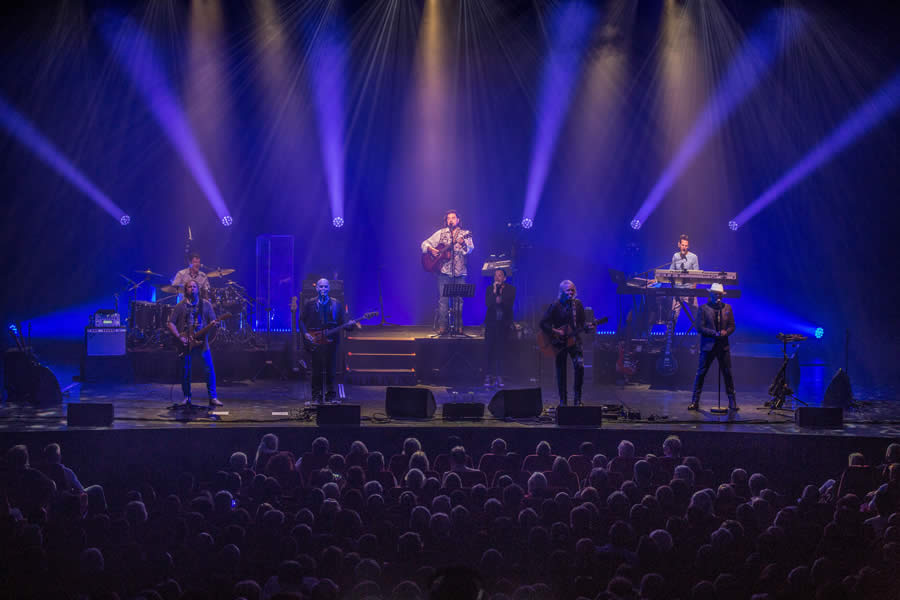 Also adding dimensionality to the stage were the rig’s 28 Maverick MK2 Wash fixtures. Thomas hung 12 of the RGBW LED wash lights on the first overhead electric, and eight on the second. He also positioned six of the fixtures on stands located on the upstage side of the band risers, and had two units dedicated to uplighting the drums and keyboards.

“Traditionally, I use the lights in those areas to create a soft flood to make sure I have all the musicians in some layer of illumination,” said Thomas. “However, I found the Zoom on the MK2 Wash gave me the flexibility to add and subtract negative space smoothly in the overall foundation wash of the stage. This gave me the opportunity to create more varied looks.”

Speaking of those looks, Thomas discussed how they’ve gone through various iterations over the years without ever losing their focus on the individual band members. “Since I began working for Alan, the designs have ranged from radically asymmetrical, to 80s era Rock Show with banks of lighting and articulated trussing, similar to the big PAR can shows that were the rage when I started,” he said. “Having the features of moving lights takes that to a modern level. Alan’s music ranges from emotional ballads such as ‘Time,’ to heavy rockers, such as ‘Dr. Tarr and Professor Fether.’” 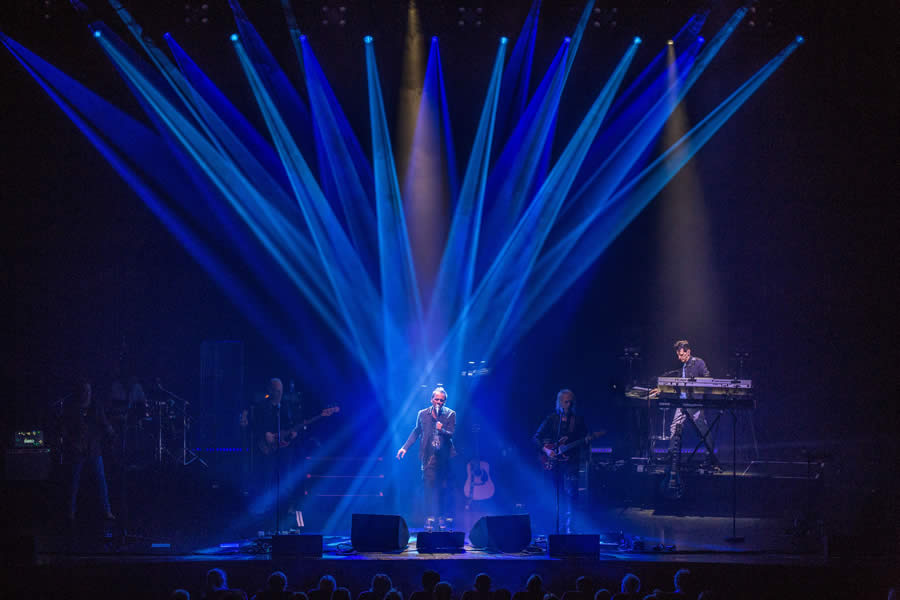 Color played a key role in the shaping the emotional tone of Thomas’ lightshow. “The replication of saturated gel colors has always been the foundation of my shows for Alan, “he said. “I use lighter pastel colors and corrected white to create striking architecture through the atmosphere. Saturated red songs like ‘Psychobabble,’ or deep violet songs like ‘Old and Wise,’ give me the base to enhance the artists on stage with contrasting, yet complementary colors. This makes the show interesting to watch for the audience during the two- hour performance.”

Like the creation of The Alan Parsons Project’s captivating live performance, the immersive light show that supported the tour in Europe was the result of group of talented individuals coming together. “Our touring crew is small, but top-notch,” said Thomas. “PM and FOH engineer Tyson Leonard worked wonders on the tour, as did Christopher Erickson on Monitors, and Grant Goddard, our SM/ Backline Tech. Credit also goes out to our Tour Manager Lisa Parsons and assistant TM Tabitha Parsons for keeping the wheels on.

With the European tour concluded, Thomas is looking forward to the upcoming 2020 tour in support of 40th Anniversary of the Alan Parsons Project release of “The Turn of A Friendly Card.” When that tour happens, it’s safe to assume that both the music and the lighting that supports it, will be the result of multiple talents coming together as one.