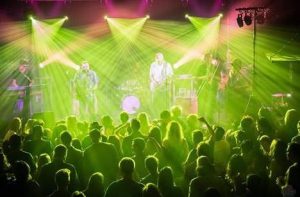 SAN DIEGO – The good times never stop for Brothers Gow.  The popular California jam band, which has been touring nonstop, doing close to 100 shows a year since 2007, shows no signs of slowing down.  With each passing mile, this tightly woven quintet has expanded its musical horizons, mashing up a mixed brew of influences from Snoop Dogg-like funk to Grateful Dead-inspired psychedelia to create a cornucopia of sounds that is all their own.

Lighting designer Matt Collier is capturing the pure joy and live-for-music spirit of Brothers Gow on their Fall Tour with a compact, but punchy and fast-moving lightshow that is built around 10 Rogue fixtures from CHAUVET Professional. Collier, who the band describes as “the sixth member of Brothers Gow,” has loaded six Rogue R1 Washes and four Rogue R1 Spots into the band’s well-traveled trailer for the tour that started in San Diego’s Music Box and has been working its way around the West Coast with stops at LA’s Teragram Ballroom and Portland’s Analog Theater.

“I got my first Rogues almost two years ago and since then have tripled the number in our floor package,” said Collier. “The band goes in a lot of different directions, always with enthusiasm and very high energy. There are features in the Rogues that allow me to create a lot of different good looks so the lights match the music. Plus the intensity level of the Rogues matches the band and, of course, something very important to us, the Rogues travel well.” 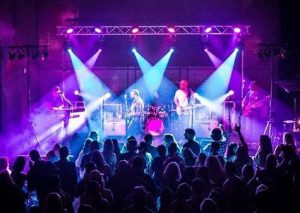 Collier’s go-to floor package for the Fall Tour includes six Rogue R1 Spot and four Rogue R1 Wash fixtures. At most venues, he positions the washes on top of ladder truss and has the spots arranged on lower truss stands and on the stage deck.

“What I usually like to do is have the washes high on the truss,” he said. “The Rogue washes have a narrow enough beam that I can put them up high and get cool well-defined designs that stand out from the ordinary looks you might find.   I can also pump out to the wash for great looks above and below the truss line. Doing this gives the crowd a clear view of the band, but the overhead light warms up the room and definitely creates a sense of excitement.

“As for the Rogue Spots, I like to keep them close to the stage deck, because this gives me good   functionality for different looks not attained by just having a floor or truss package,” continued Collier. “Placing the lights on the floor stands gives me a longer beam throw, which is great with the R1s. They have a great focus range and crisp gobos for some cool looks — especially when I’m using the 3-facet rotating prism. Plus, the two gobo wheels are one of the features I like best about the Rogues, since they let me create some very unique looks by controlling the beam angle used with them.” 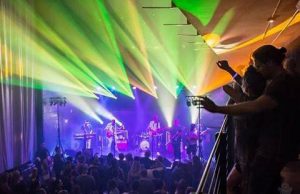 Creating distinctive looks is essential to capturing the spirit of Brothers Gow and their eclectic blend of grunge-infused jam band music. Just as important is conveying the emotional force of the band’s performance with vivid colors. The Rogue R1 Spot, with its split color capabilities, and the Rogue R1 Wash, with its RGBW LED light source, provide the LD with a broad color palette.

Also adding color to the band’s performances are the 14 CHAUVET DJ SlimPAR 64 RGBA fixtures that Collier positions at various points in his rig. “I use the SlimPARs as static accent lights and to add another cool layer to complement my design,” he said. “Their slim housing allows them to be mounted in tight spots – plus they fit nicely in the trailer.”

Such trailer friendliness is likely to be an important attribute for Brothers Gow lighting fixtures for many years to come. By all indications, the band and its LD intend to keep rolling down the road for the foreseeable future. With a long string of sold-out shows and successful studio albums, plus a lighting rig that just won’t quit, why should they ever stop the music?