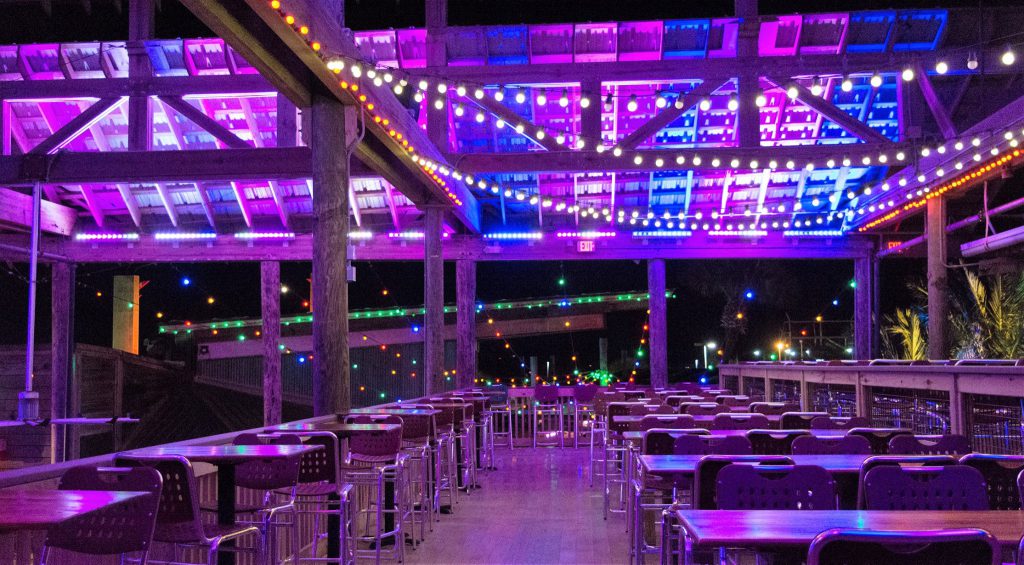 FORT WALDEN BEACH, FL – Anyone wanting to take a look inside Al’s Beach Club, doesn’t have to try too hard. That’s because for all practical purposes, this new live music venue has no “inside.” The only club in Fort Walden Beach located directly on the city’s famed Emerald Coast beach, Al’s is almost all open air, with no walls or barriers separating it from its surroundings.

This breezy configuration makes for good times, but it also creates a challenging environment for a lighting system. Aside from contending with wind and sand, any fixtures installed at this club have to stand up to the rain. (Averaging 69 inches of precipitation a year, Fort Walden is the rainiest city in Florida.) Sohail e. Najafi and his team at Najafi Design Group (Los Angeles, Las Vegas) were well aware of this challenge, which is why they designed the lighting rig at Al’s around a collection of IP-rated fixtures from CHAUVET Professional and it’s sister company ILUMINARC.

“This is an incredibly beautiful site, located directly on 500 feet of pristine white sand beach,” said Najafi. “The open air structure contributes to the overall beauty of the venue, but our client was having a hard time finding fixtures that could last in their harsh marine environment. We specified fixtures that we knew were engineered to withstand the conditions that would be encountered here. Everyone involved in this project – the client, the contractors, as well as the electrical and integration teams – were all impressed with the solid feel of the Chauvet and ILUMINARC fixtures.” 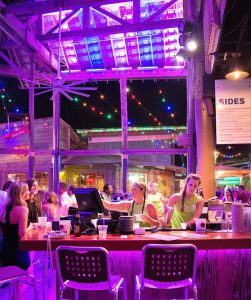 The Chauvet and ILUMINARC fixtures in the Al’s Beach House rig are much more than solid workhorses able to stand up to the elements. Najafi and his team, which included associate designer Joshua Cuellar and assistant designer Alyssa Champo, also relied on the color-rendering capabilities of the fixtures, particularly the COLORado 2-Quad Zoom and the Colorist units, to create a well-defined architectural structure in the open air club.

Highlighting a series of specialty palm trees imported from California to Florida in the club’s front feature with subtly color changing light from the Colorist units, the designers have used richly textured hues to distinguish the open air building from its surroundings. Colorist fixtures also wash the 50’ foot high by 200’ long roof super structure over the main venue area. The colorized ceiling creates a memorable visual impression when viewed from inside the club or seen from the beach through its open walls.

Also impressive are the colorful shafts of light from the four Q-Wash and four Intimidator fixtures flown over the club’s bandstand stage. These units are used primarily for stage air effects and provide impressive visuals from just a handful of fixtures. Lighted fog effects from the Vesuvio fixtures add a bold dramatic element to the stage lighting effects as they are flown directly above the performance area focus out toward the audience. “Whenever we ran the Vesuvios opening weekend, the bands performing, as well as the guests in the audience, rocked out and cheered,” said Najafi.

“I am very pleased with the performance, versatility, durability, and value from these COLORado and Colorist fixtures and cannot wait to see how they wow audiences for many seasons to come,” Najafi concluded.

Indeed, the Chauvet and ILUMINARC rig has already handled its share of rain and Gulf Coast winds, but it hasn’t been exposed to snow yet. Of course that isn’t likely; the last significant snowfall in Fort Walden Beach took place on January 31, 1977. However, if these conditions are repeated, this rig is ready.