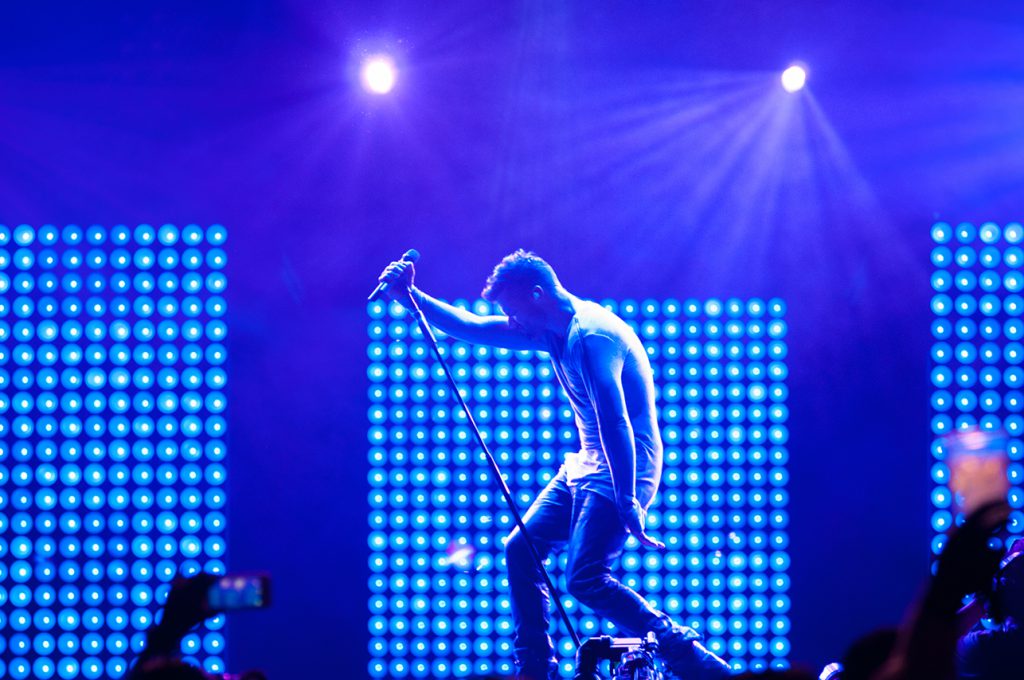 MEXICO CITY – Everything about Ricky Martin’s phenomenal career has been written on a grand scale. His success has been nothing short of awesome, with six Grammy Awards, 17 Billboard chart toppers and 85 million album sales to his credit. Throngs of fans turn out for his concerts around the world. As for the shows themselves, “extravagant” doesn’t even begin to do justice to their dazzling choreography and scenic elements. There is no room in a Ricky Martin performance for anything that’s less than intense, which is why Manager and Creative Producer Veikko Fuhrmann of Motion Music, Lighting Designer Richard Neville, Lighting Director Churry Lafuente and Video Designer Alex Grierson built the lightshow for the superstar’s Mexican One World Tour around pixel mapped Nexus 4×4 and Next NXT-1 panels from CHAUVET Professional.

Opening before a sellout crowd at the 15,000-seat Palacio de los Deportes in the nation’s capital, the Mexican tour featured 105 Nexus 4×4 LED panels and 36 Next NXT-1 moving panels in its rig, along with other CHAUVET Professional fixtures, including four Vesuvio RGBA LED fog machines and two Amhaze II foggers. Monterrey-based rental company Audio Systems del Norte, SA de CV supplied the gear. Beginning with the uptempo EDM-tinged dance tune “Come With Me” and rollicking on through classics like “Livin’ la Vida Loca,” the concert captured the irrepressible energy that has made Ricky Martin a fan magnet around the world. 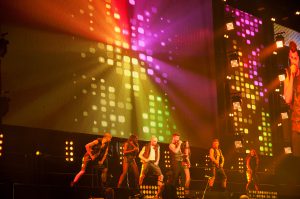 “Being part of Ricky Martin’s crew is an exciting experience and setting up this tour pushed our limits to create a magic show that complements Ricky’s talent. We are very happy with the production, the lighting design, and we appreciate all the support CHAUVET Professional has given us,” said Fuhrmann. “Rehearsing in three different cities in the US and Mexico in between Ricky’s engagement at The Voice Mexico was a challenge, but even more so was building the stage and programming all new content and lights in five days before opening night. This was the shortest ever Production Timeline we had for a Ricky Martin Show, but our creative team together with the Chauvet team worked wonders.”

The Nexus panels, which were arrayed in various-sized wall configurations upstage and the Next NXT-1 panels (hung on geometric overhead truss) kept pace with the superstar’s performance step for dynamic step, displaying pixel mapped images and vivid colors that matched his songs. For example, when Martin sang of his native Puerto Rico, the panels flashed the colors of the commonwealth’s flag.

“Ricky is known for spectacular performances with a lot of great dancing and a massive stage presence; so we obviously wanted a lightshow that was in keeping with the aura that surrounds this superstar,” said Neville of Mandylights (Sydney, Australia), the lighting designer for the international Ricky Martin tour. “The Nexus and NXT-1 gave us so many exciting visuals to incorporate into the show as lights, pixel-mapped effects and as scenic elements in their own right.” 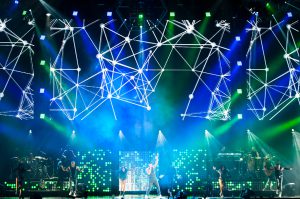 Lighting Director Lafuente of Light Years Productions (Mexico City) echoed this view. “The goal of the show was to join lights, color and video with the music — and the Nexus and NXT-1 did a great job at this,” he said. “When Ricky saw the show during a rehearsal he said to me ‘Fantastic!’ At the beginning, we were just going to use the Nexus panels. Then we saw a video on the NXT-1 moving panel and decided to give it a try. It’s been an amazing fixture. Its square shape, brightness and movement really stand out.”

The Nexus 4×4 panels themselves are a relative newcomer to the Ricky Martin tour, having been added to the rig earlier this year as a replacement for the video panel walls that were used in 2013. “Last year we had a video wall behind Ricky, but we wanted to be more diverse and go with something different, because we have a lot of other video screens in the show,” said Neville. “The Nexus was the perfect fixture to use in place of the video walls because aside from being incredibly bright – we ran it at only 20-percent – and having really cool colors, it also looks incredible on the stage when it isn’t running. The frosted body of the fixture takes light really well.”

Neville and lighting programmer Grierson (also of Mandylights) made the Nexus and Next NXT-1 integral parts of the lightshow programming. The fixtures were programmed two different ways during the show. They were patched through the console as individual RGB cells for simple bumps, color effects and chases. At other times during the show, they were controlled via a media server to take video files as well as content from the large video screens over the stage. 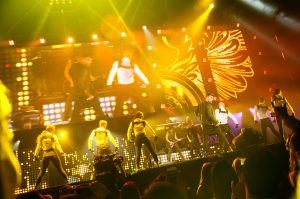 “We achieved a nice flowing design throughout the stage by using content on all surfaces,” said Grierson. “The Nexus was not only a lighting fixture; it was also a video content display, which created a very unified look on stage. Another factor that contributed to this look was the impressive ability of the Nexus to render smooth even colors that looked consistent from fixture to fixture.”

The Next NXT-1 also came in for praise for being easy to program. “There were a lot of things to like about the NXT-1,” said Neville. “I was very impressed by how straightforward this fixture is in terms of control.  A lot of similar fixtures have incredibly complicated channel maps.”

As Ricky Martin’s international lighting designer, Neville has taken the superstar’s lighting rig to a variety of different-sized venues. “We set up for large venues such as the concert arena in Mexico City to more intimate settings, so we have to adjust our rig accordingly,” he said. “The Nexus panels have made it easy for us to be flexible. They also give us the dependability we need. We had 2,000 different cues in this show and we haven’t had to swap a single fixture from CHAUVET Professional.” 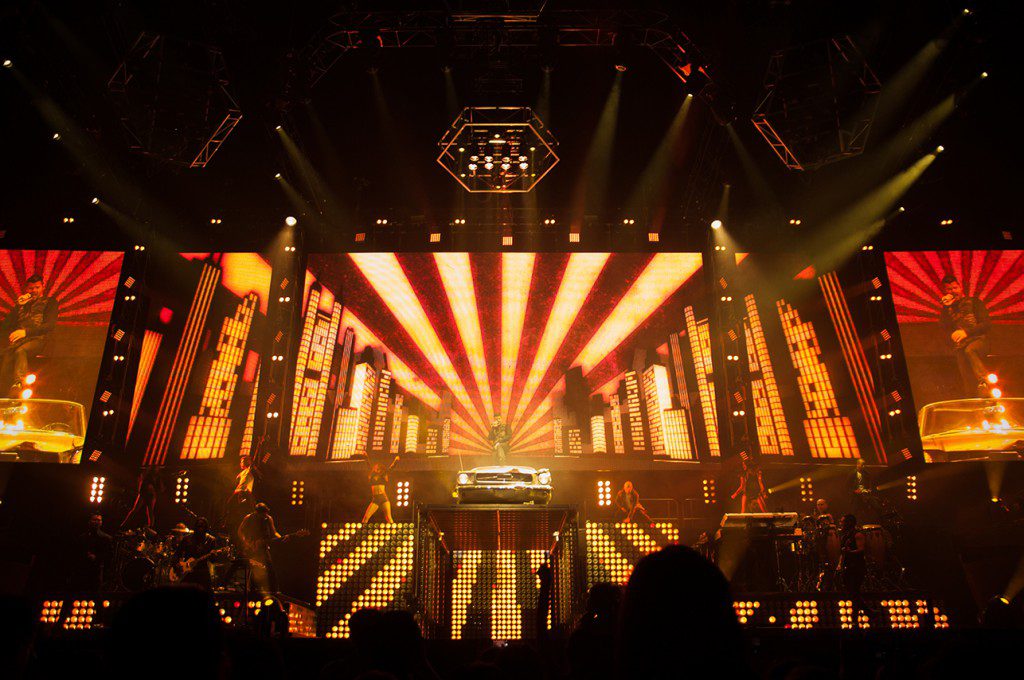