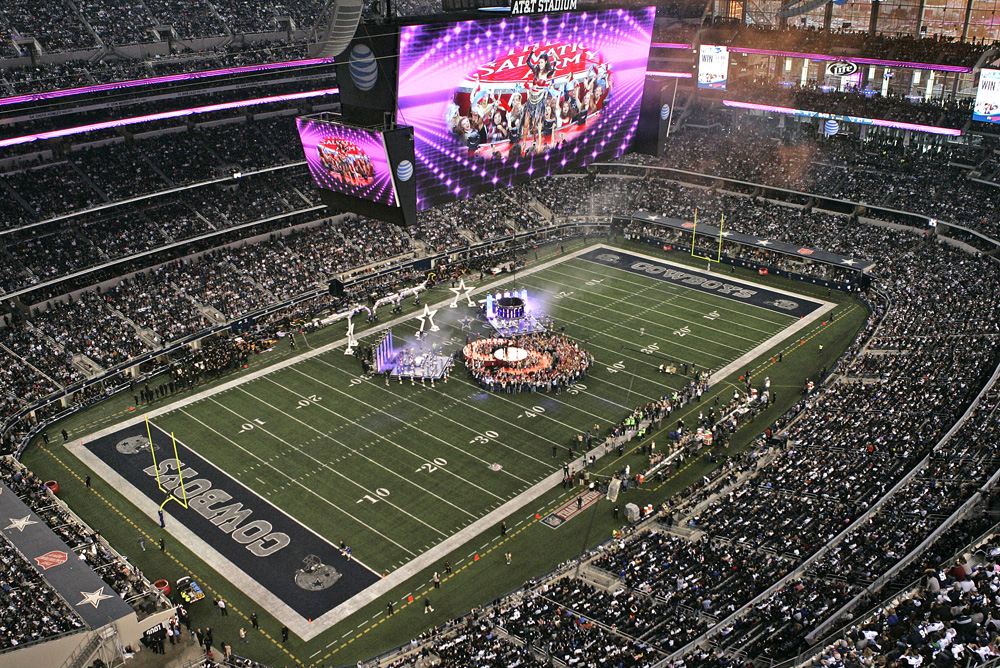 Clad in a red leather body suit and gold sandals, Gomez brought down the house with a scintillating non-stop seven-minute medley of hits like “Come and Get It,” and “Like A Champion.”  Keeping pace with the multi-platinum superstar were two massive displays of Nexus 4×4 panels, which flashed a brilliant array of colors and accented high points of Gomez’s performance with blinding bursts of intense white light.

Technical producers Media West, Inc. contracted John P. Marovich of Habitech (Las Vegas), who designed the halftime lightshow. Marovich called the Nexus 4×4 “camera candy” for its use in the design.  “Creating a design for a televised halftime show presents special challenges,” he said. “The lights not only have to look good for the live audience, they also have to work well with the camera. As a fixed blinder, the Nexus 4×4 works better than a moving head, because the camera reads it consistently so you’re always getting a great look at the light, whereas a  moving head gives you different looks at different times. So the Nexus 4×4 was true camera candy.”

Marovich, who now has designed lightshows for eight consecutive Dallas Cowboy Thanksgiving halftime performances, was also impressed with the way the Nexus 4×4 looked from the stands.  “A halftime show presents a different set of design challenges than a concert,” he said. “Instead of taking place in a darkened arena, your show is surrounded by a relatively high level of ambient light, so you need extra intense brightness to stand out to the fans in the stadium.”

This is especially true in the Dallas Cowboys’ AT&T Stadium, which houses the world’s largest center hung LED scoreboard, a two-sided 23,040 -square -foot behemoth that commands attention. “The huge scoreboard not only throws off a lot of light, it naturally draws eyeballs,” said Marovich, “so we needed something big and bright behind the stage that could stand up to the ambient light and the scoreboard’s ‘star power’. That’s exactly what we got with the Nexus 4×4.  The COB technology in the Nexus 4×4 is a game changer for LED panels, because it makes it feasible to use LEDs as blinders.  We wouldn’t have had this option available to us without this technology.”

In fact, says Marovich, even with the high ambient light in the stadium, the Nexus 4×4 exceeded all expectation in terms of their brightness. “I was only able to run the Nexus panels at 25% maximum before they blew the cameras out,” he exclaimed.  “At 100% they practically blew you out of your seat!”

Marovich used two 15-foot high by 24-foot wide walls of Nexus 4×4s, one on each side of the 48-foot long main stage. The walls each consisted of 160 Nexus 4×4 units driven by a Madrix controller and Enttec Datagate MK2 units.  Gemini Light, Sound and Video of Dallas provided the gear.

Capable of delivering the sizzle of a pixel mapping display and a robust light output afforded by 16 27-watt RGB COB LEDs, the Nexus 4×4 is controllable via Art-Net, Kling-Net and DMX protocols. The COB (Chip On Board) LEDs are mounted directly on the circuit board, which results in shorter interconnection lengths, to produce greater output, more even light distribution and enhanced colors. The combination of COB emitters and advanced reflector design optics in the Nexus 4×4 results in a striking diffused light richly drenched in saturated hues.

The rugged structure and easy-setup design of the Nexus also came in for praise from Marovich.  “An under-rated challenge in doing a halftime show is that you have to move and set up a huge amount of technology in a short period of time,” he said. “We had about four minutes to get our Selena Gomez show out on the field and set up all the power and data connections. This made us appreciate the reliability of the Nexus 4×4 and how easy it was to use the integrated locks to set up two large walls. The Nexus 4×4 is really a heaven sent for this type off application.”