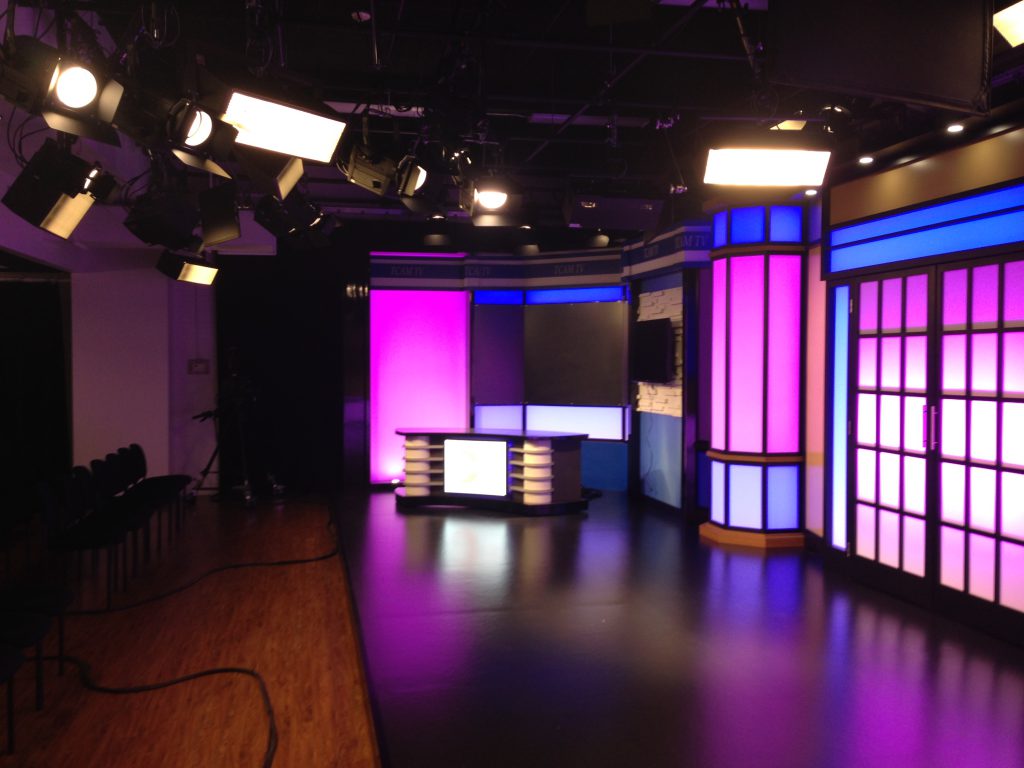 TAUNTON, MA – Founded in 1637 by members of the Plymouth Colony, Taunton is one of the oldest towns in the US, but it’s always had a young outlook.  More than two hundred years after its founding, it became a pioneering center of railroad locomotive production. This forward looking streak is alive and well in 2015, as evidenced by the new multi-functional production studio at Taunton Community Access and Media (TCAM) that utilizes Ovation LED ellipsoidal and Fresnel fixtures from CHAUVET Professional.

Jonathan Lipsy, manager of broadcast and lighting at Integrated Solutions Group, designed the flexible studio for the public access television station. “My role in this project was to create a cutting-edge lighting design that would enable TCAM to create practically any show that walked through the door,” said the LD.  “Being a community access television station, TCAM does not create its own programming, but instead develops content that the public brings to it.”

Although this diversity makes for a great community broadcasting service, it also creates a special set of studio design demands. TCAM told Lipsy it wanted to build a studio that had a hard set with one side for a news style show, one for an interview style show and the center “for everything in between.”  To make matters even more challenging, the station also wanted the lighting and camera positions in its studio to accommodate audience participation. 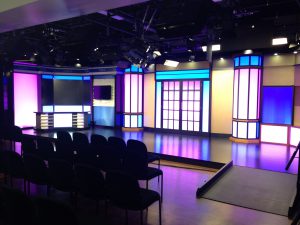 “The station wears many hats, to be sure,” said Lipsy, who was responsible for designing the studio’s pipe grid and curtain system, as well as its lighting and lighting control system. “From a design standpoint, we needed to create a studio that could handle the whole spectrum of production ideas.”

Of paramount importance in lighting a contemporary multi-functional studio with LED fixtures were focus and control, according to Lipsy. “Focus and control were a big concern that led me to select the Ovation LED fixtures,” he said. “Some lighting fixtures offer beautiful light, but it is light that’s not very controllable.  These fixtures throw light in a lot of different directions that require modifiers or blockers to help focus the beam.  My desire was to create a set that had peaks and valleys of lighting for a more dramatic look rather than an overall washed look.  To accomplish this, I needed to utilize lighting fixtures with proper control with excellent dimming capabilities.  I needed a fixture that could throw a narrow beam of light, while having the capability of being dimmed very low without flickering or cutting out at the lower levels. The Ovation fixtures fit the bill perfectly.”

Lipsy used five Ovation E-190WW 36-degree ellipsoidal fixtures in his design. He positioned these units at the center of the interview set for use as background wash lights. Projecting breakup patterns from these lights on the wall behind the interview subjects lends depth and shape to the set.  The built-in shutters of the Ovation ellipsoidal fixtures allowed him hit the unlit panels on the walls directly without having light spill on the rest of the set.

In addition to the ellipsoidal fixtures, Lipsy used ten Ovation F-165WW and 14 Ovation F-95WW Fresnel units in his design. The Ovation F-165WW fixtures were arranged throughout the entire set as back hair/rim lights.  “There were a number of reasons why the Ovation F-165WW was a perfect fit for this job,” he said. “Since the pipe grid was hung at 12 feet, I wanted a fixture that would offer me both an adequate amount of light from that distance. I also wanted to have the ability to remotely control the field angle of the light. The Ovation fixtures gave me both.

“I also arranged the 14 Ovation F-95WW Fresnels throughout the set, for key light positions,” continued Lipsy. “These 95-watt units were dropped down to roughly 9 feet in most areas so the angle of illumination would not throw too long of a shadow on the talent.  Because the set had so many built-in colored LED lights, I needed to be able to control the spill of the fixtures so as not to wash out the colors on the set.  In doing this, I needed to find the balance between too much angle on a subject and too much wash on the background.  The Ovation F-95WW Fresnel offered me the widest flood-to-spot ratio, allowing me to achieve that balance. I was extremely happy with the final result.”

Lipsy’s enthusiasm was shared throughout the historic town of Taunton, which has witnessed more than a few technological innovations since its early locomotive days. TCAM producers and their audiences have been universally amazed by the looks created by the design of the new studio sets.

“The reaction has been fantastic,” said Lipsy. “This may be one of the finest studios constructed for the Access Television Community in the Northeast.  From the size of the studio, to the control room, to the lighting design, to the set design and to the overall fluidity of the studio, I would put it in the top five studios that I have ever had the pleasure of walking into.”